voice in the head

Id even argue that the current packagefs setup is WORSE than what NT5+ does with UAC.

What is wrong in UAC?

If you are just going to nitpick why did you bother posting… UAC broke alot of things one windows XP and 7 and continues to do so on Windows 10 (new applications just work around it). There is a whole archived email list about the glass elevator if you can’t be bothered to read it I can’t be bothered to repeat anything here.

That’s nonsense or do you read everthing aloud… and think aloud wow!

Now I dare you not to post any further off topic nonsense in this thread.

Actually i hear my own voice in my head while thinking. But i never said i am sane.

I don’t think /boot/system existed in BeOS, right? So what are the .zips trying to do here that would run into packagefs folders?

boot/beos/system in beos is correct

And it is writeable.

Beos are writeable in every folder

I meant the problem CANNOT be the read-only /boot/beos/system… structure as it is possible to create this folder structure, so the reason why it cant be installed must be something else.
Please do not explain me that in BeOS every folder is writeable as i know it well, i used to work on a BeOS distribution back then.

9 posts were split to a new topic: BeOS compatibility and packagefs

Please do not spam about packagefs in every topic, use separate topic like this.

Considering BeIA SDK, it is nothing strange that it not run properly in Haiku, because it is private unpublished software and it may use undocumented OS features. It is not useful by itself because it can’t be freely distributed and contains no source code. But it has historical significance and can have interesting architecture solutions that can be used in new software, for example Binder like scripting support can be added to WebPositive.

Please do not complaint about my sharing my thoughts in any topic that I like where it is RELEVANT… you are off topic.

BeIA is like the antithesis of packagefs… as it made the hole system read only and reduced install footprint and memory usage.

I dont think they had any reason other than getting the whole os onto a idk 32mb compact flash card, but i never really dived deep into the BeIA stuff other than building an own image with the SDK years ago and playing with Wagner on R5.0.3, but it was already too old that time to be useful. Also i was not part of its target audience, i think.
Neat ideas were there, but we know what happend. Did i missed something great?

I find it fun, because BeIA’s cfs is even worse than packagefs in terms of making the OS read-only.

Ah yes… OS in rom is less read only than packagefs … also this is my last post, I’m sick of wasting my time here. Congrats on making design choices that drive users away, as well as generally being disagreeable about it.

also this is my last post, I’m sick of wasting my time here.

Good decision. If it’s any consolation, you didn’t just waste your own time, not by a long shot…

I didn’t mean to create a big debate on Haiku and the state of the file system.

Honestly, If I could get a machine that ran BeOS R5.03 (or even Zeta) I’d be using that for all of this. The VM’s work well enough but they do cause the issue that they aren’t real hardware and I’d prefer real hardware. Most of my old hardware is long gone now. I’m not sure I even have a PS/2 keyboard in storage. Other than my PowerMac 9500, I don’t think I have a BeOS capable machine, and the Mac is not much use for any of this…

If I can tweak things and hand install this in to Haiku, I will. I now have the pre packageFS version downloading. If that installs and boots on my Netbook, I’ll play with it and see what I can do.

Did you try to unpack Haiku like I mentioned earlier?

What format this SDK installer in? Is it SoftwareValet .pkg or something else? AFAIK you can do it manually: Copy your /system folder to another bfs partition Delete everything in system/packages you copied except for haiku_loader hpkg Boot from this new partition

I did, but it would not boot from that BFS partition. I’m going to try again now that the drive is definitely bootable. I also wondered if replacing the components on the alpha with later ones might yield some success. I think I’d try that first. Then try copying the files again.

Time is my main enemy at the moment. I maybe get 1 hour every couple of days to look at stuff like this. Sorry for the slower progress.

This post was flagged by the community and is temporarily hidden.

I’m back Be fans with another concept! After everything I’ve studied with the BeIA videos, links, etc. I decided to redo several things about the concept and so I’ve done just that (and thought of some new ideas as well)! And here we go!

Since an “IA” system is locked down from user access there’s no shell, terminal, etc. that is installed by default… but if someone presses the “developer console” key sequence they could be dropped into a console or a shell that starts out limited, but could also get a full zsh shell if they so desire. The fake commands here are some things I imagine I’d need in here if I actually made it a reality 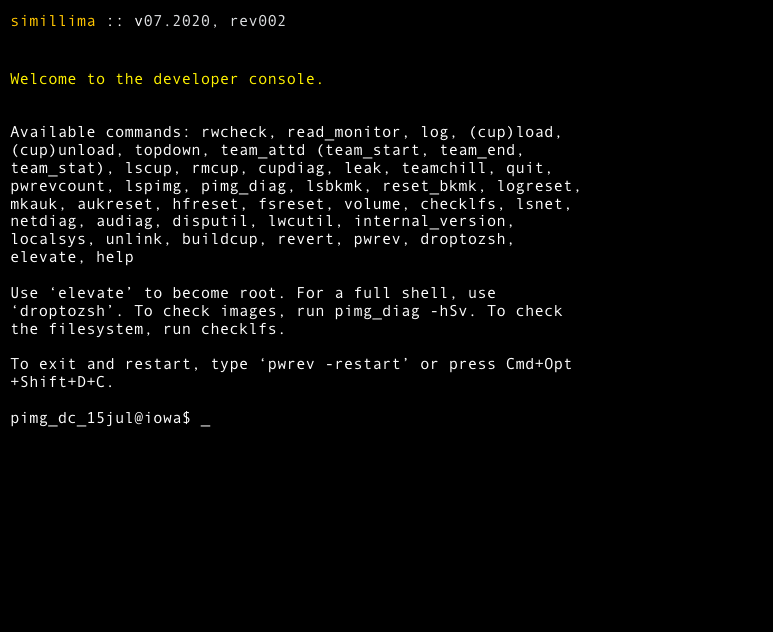 From everything I’ve recently been seeing about it, the IA systems had a Be splash, but what if we had a more modern (and minimal) splash that matched the minimal design of IA? 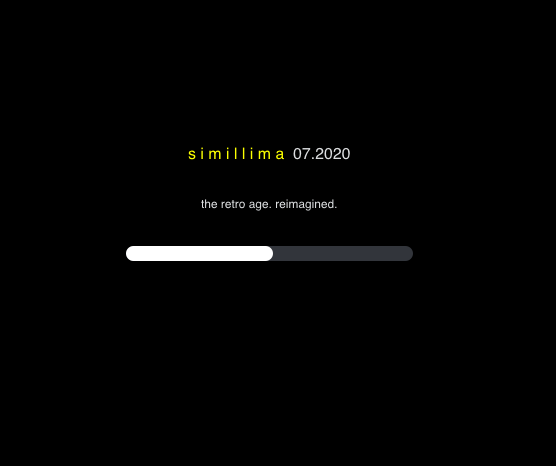 Every '90s system I’ve messed around with had some sort of disk check feature in it and hey, it’d be cool to have something similar here. So if someone held in power, things crashed, etc. this would replace the startup splash (and also the KDLs; to see the logs, someone could open the console). 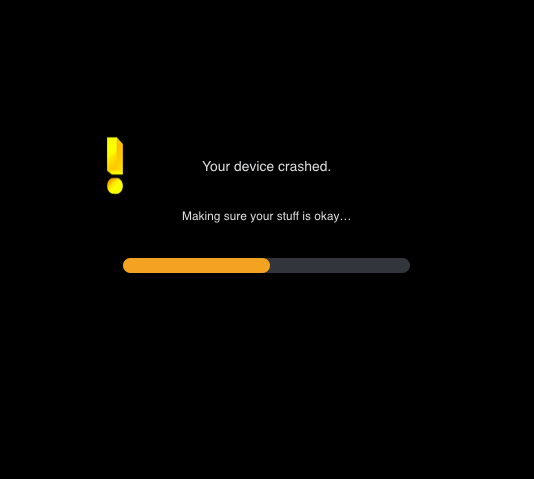 But of course, the start splash wouldn’t always appear if we had a sleep mode… so that could look like this: 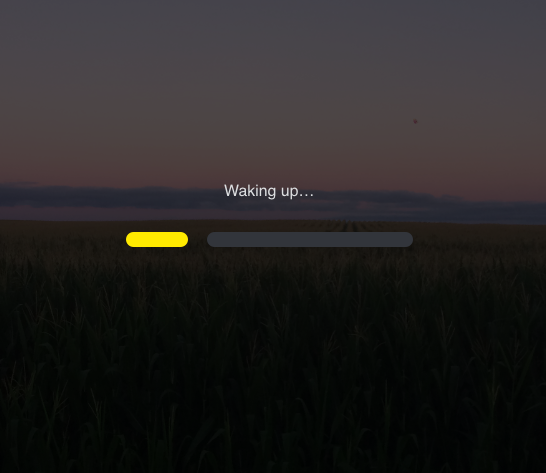 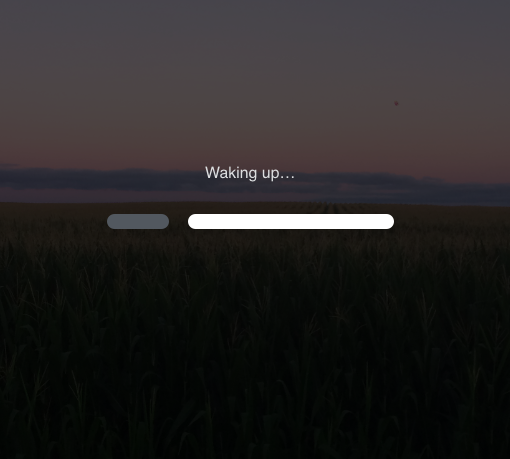 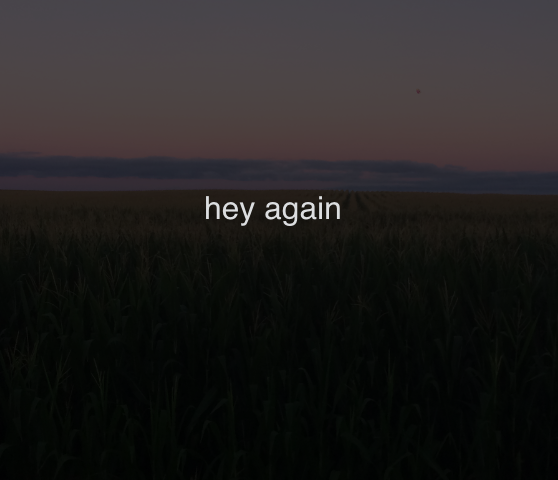 I know the iPad, etc. are meant to be for one person to use, but if its installed on something like a living room box, why not have a way to share it with several people or a guest? 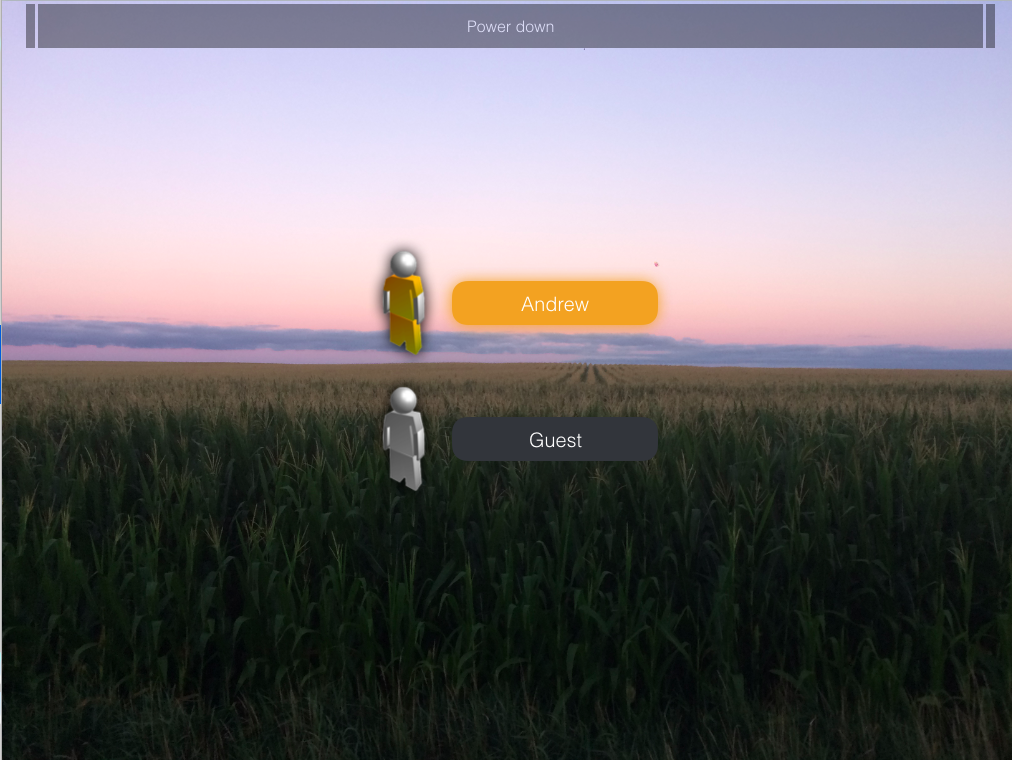 This part would also be where the “reset” or restart and hibernate options would hide:

As for the home screen, I’ve went back to the tablet-y design which I think better matches what I see the BeIA devices would have wanted to do. Applets are stretchable or resizable as live widgets, so the clock, notes, pictures, media, calculator I imagine as live and could be resized. 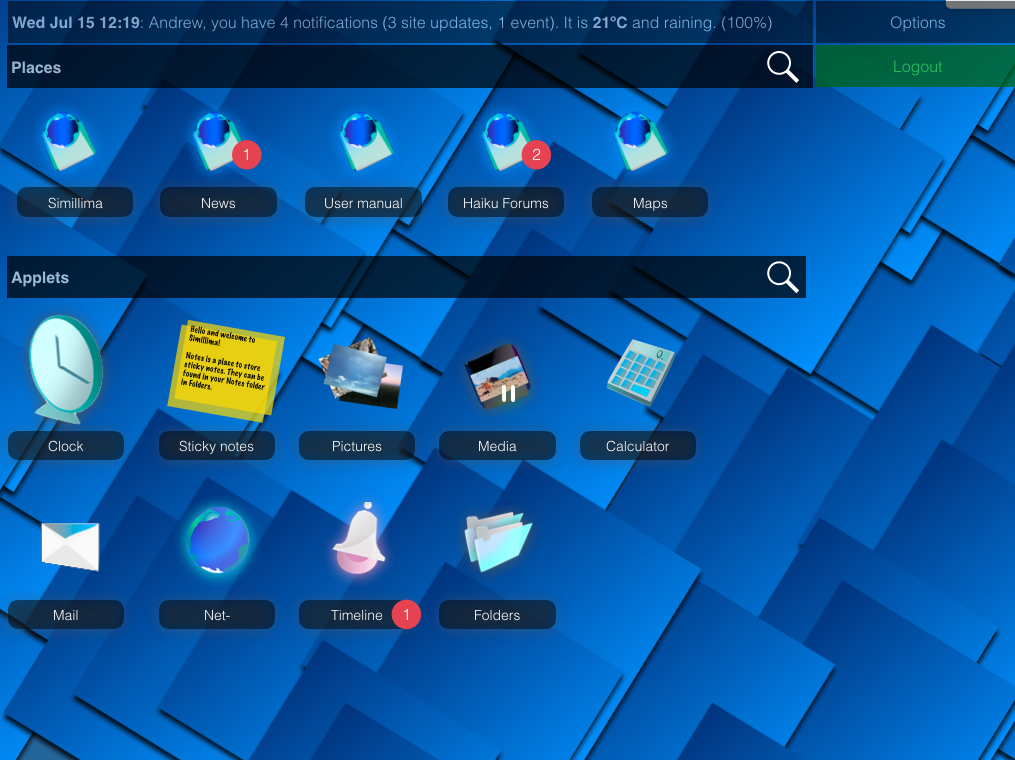 From looking at the “webpad” idea and other old BeIA UIs, there appeared to be designs with bubbles, links, etc. so why not pinch out to make these free floating as a “Cluster” mode? Here, all the stuff would become widgets and could be placed wherever on the home pad: 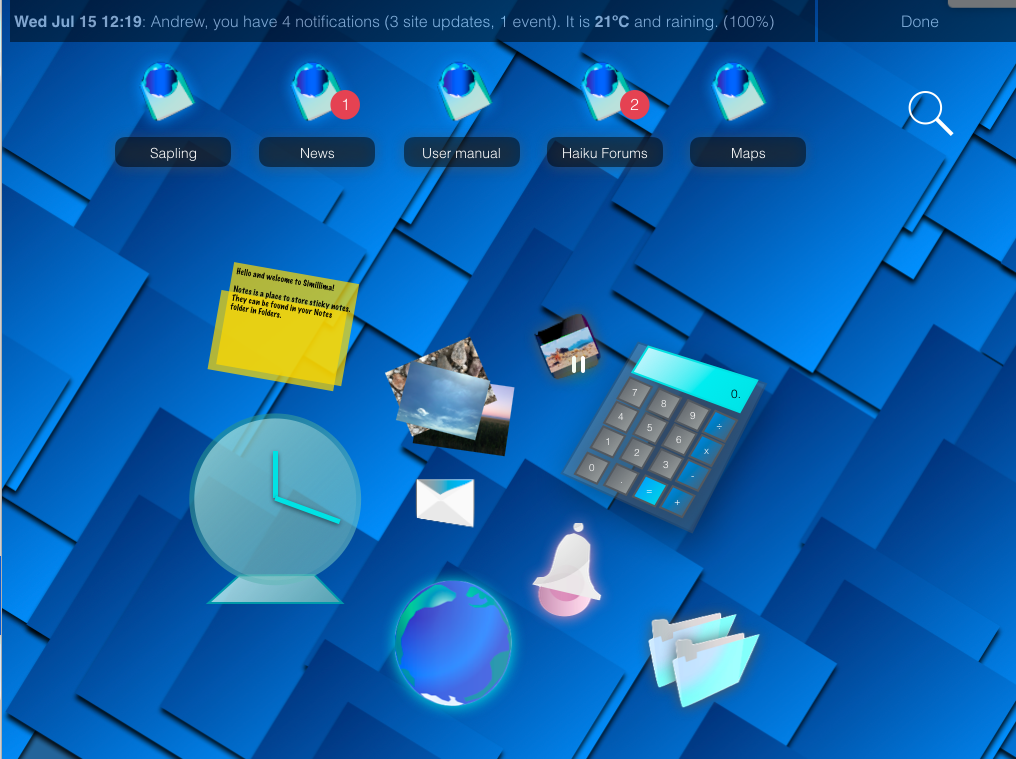 And the other big thing that had me thinking is search – it wouldn’t work like regular BeOS so why make it like that? So this is the second idea for universal search: 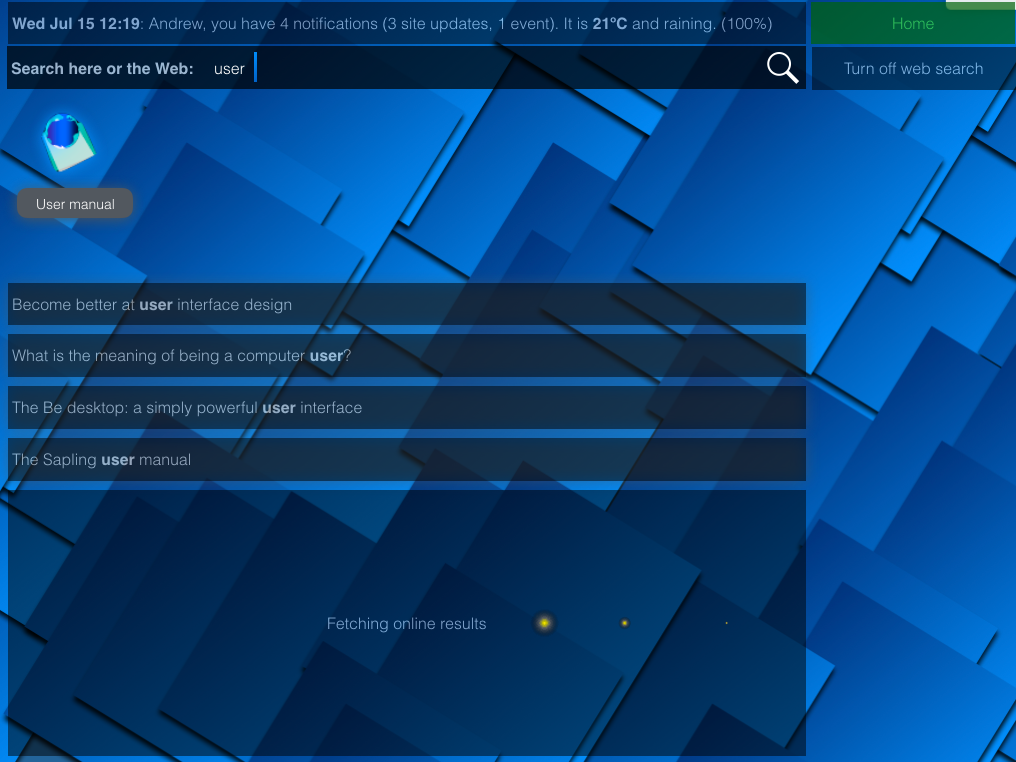 The other big thing that needed a new design since my first concept in this thread are options. Again from what I can tell from the BeIA interfaces, options were very “appliance” centered… so why not make them that way?

But heck, it isn’t the 90s, so let’s give the old options ideas a makeover! This also gives an idea what the UI widgets look like here

and here, there’s ideas for left/right layouts, speech, languages, and a place to set backdrops and the color theme from palettes – with an option to cycle imagined in here too: 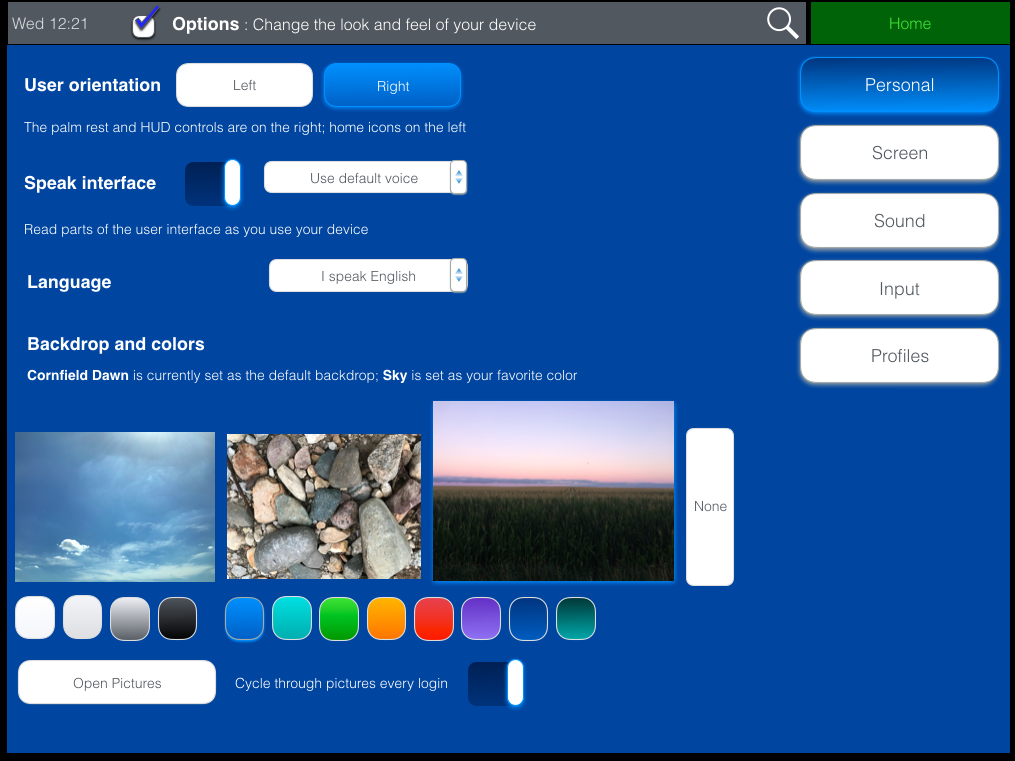 If a color is set, it affects the backdrops in applets and all the widgets so things would change to something like this: 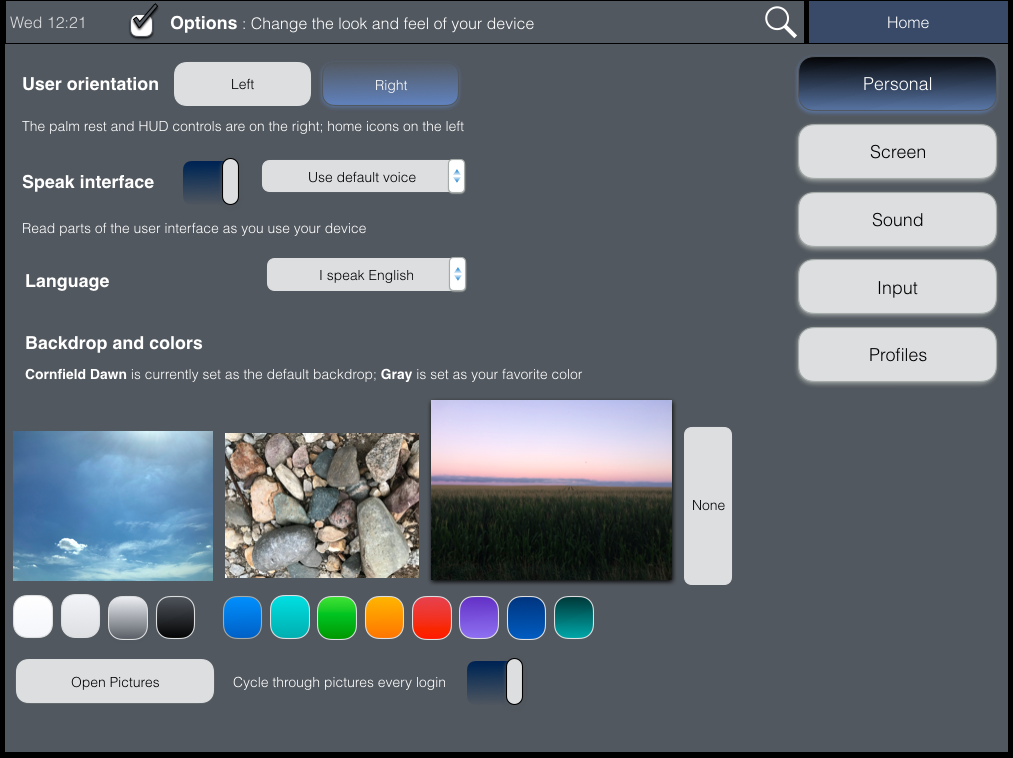 Screen allows dynamically changing the zoom level (DPI scale), screen resolution, output (mirroring), whether to show a slideshow when the screen is locked and also when to turn off device (if sleep isn’t available like Haiku atm): 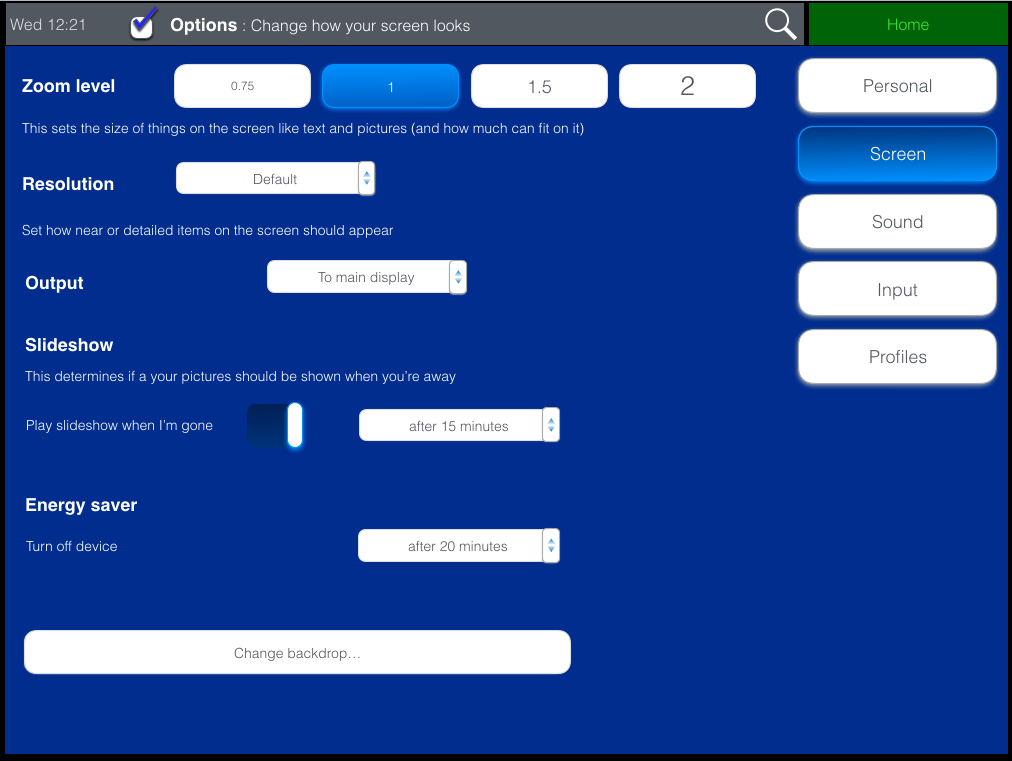 Sound has a volume slider, alert sound choice, output choice (like speakers, headphones, or whatever), a mic access slider and choice (another pop-up) and mic level slider. 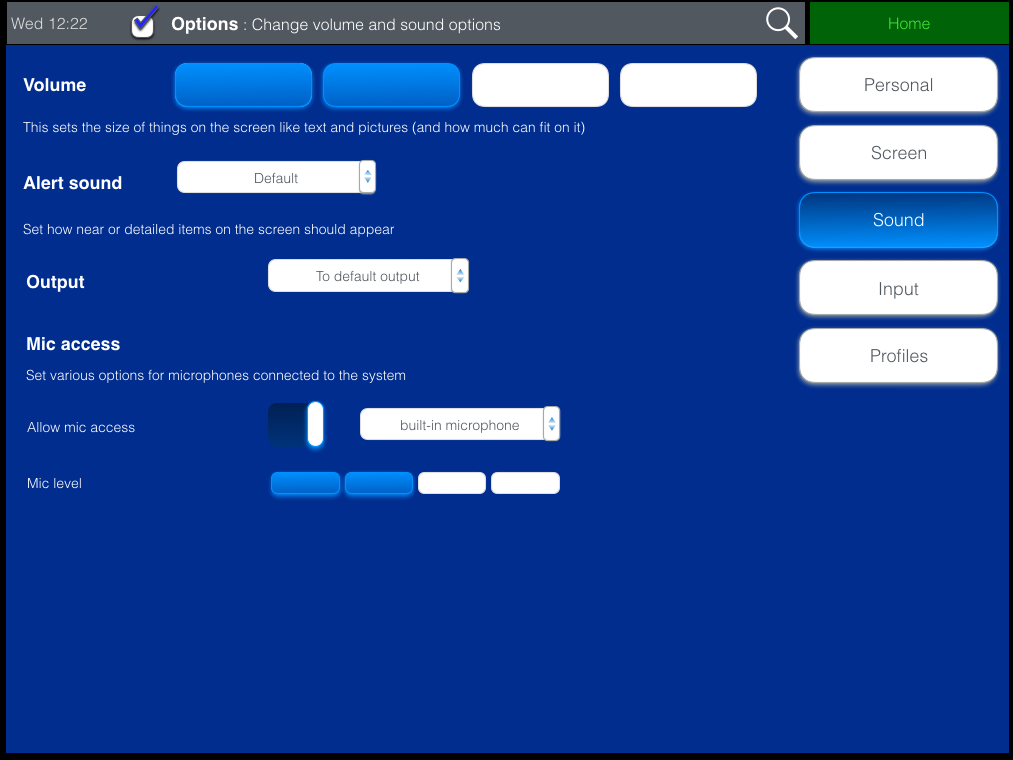 I picture with Input with a universal slider for setting response for keyboards, mice, touchpads, pens, everything and a ‘tap to click’ and ‘scrolling style’ pop-up menu: 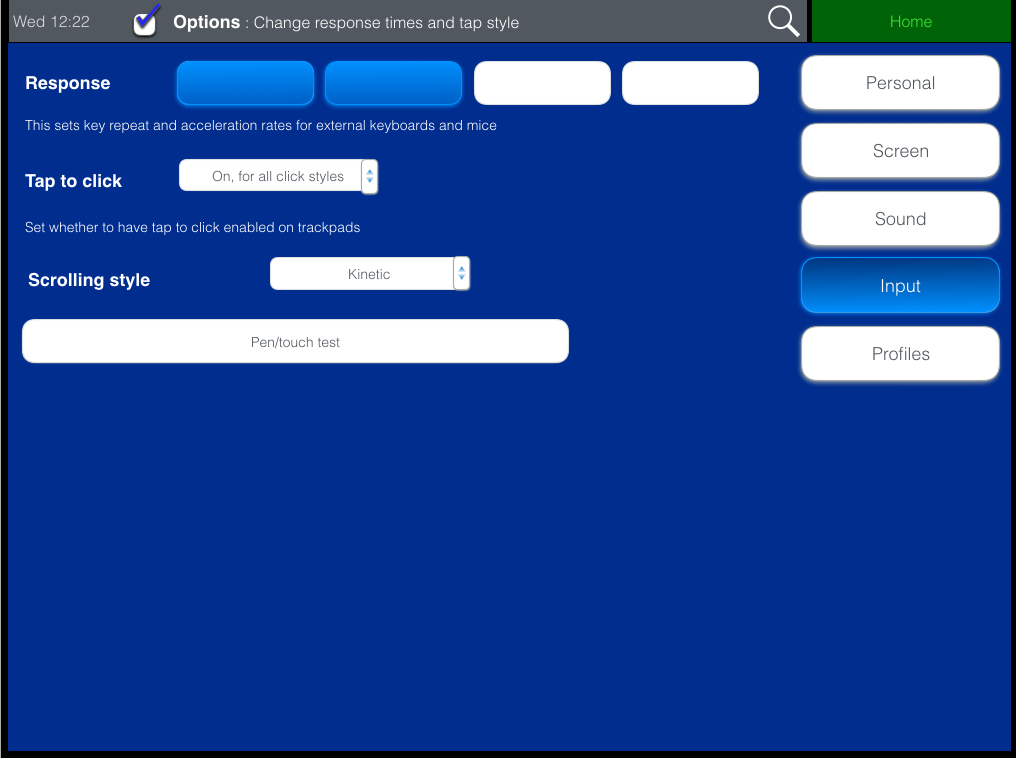 Another idea here is to have a touch testing field like this: 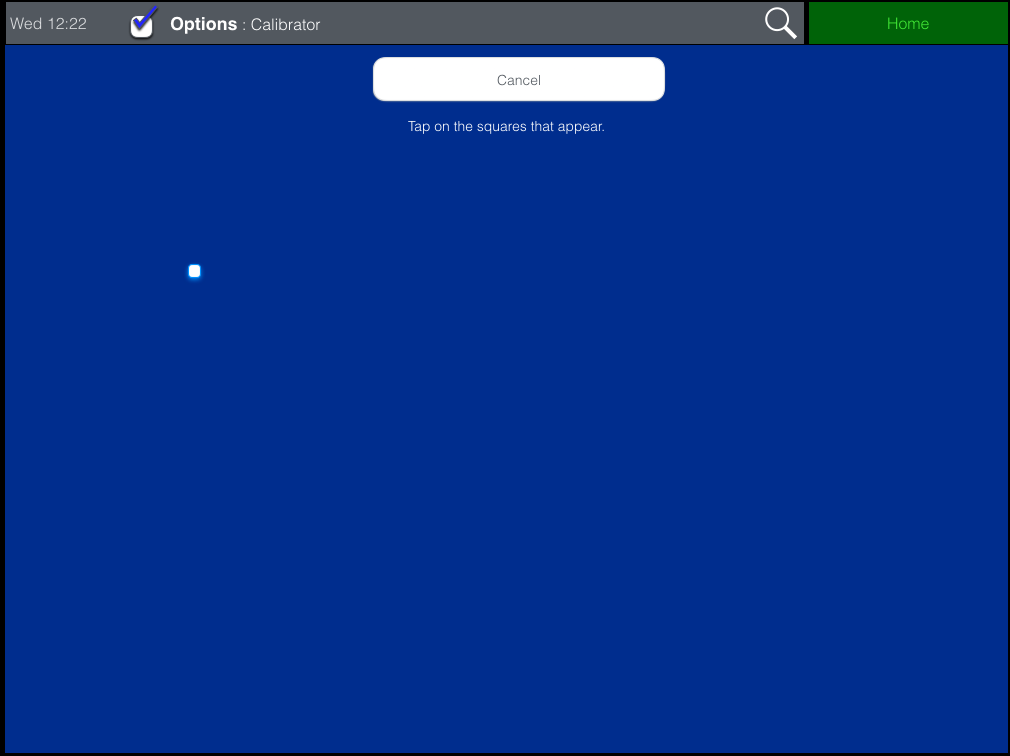 Profiles was the hardest one to do, mostly because I crammed a lot in here. First part is a list of people on the system with buttons to change passwords, make and reset unlock keys, and create and disable profiles or people on the system. It’d also be possible to make and change avatars, set Internet profiles and see access status (to be real, the concept is connected to Ethernet since Wifi on Haiku doesn’t always work great), and webcam access with the usual features like reset, data lock, crash logs (where the outputs of KDLs go), and even an encryption option. 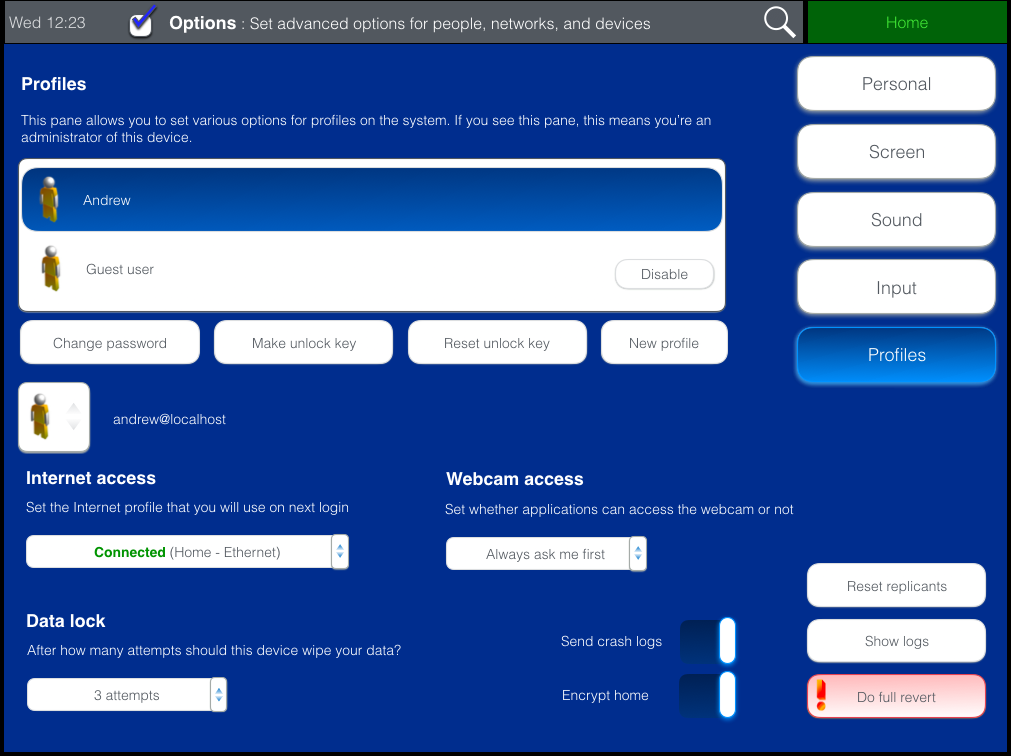 And for setting time? This would just be done with the Clock applet like this: 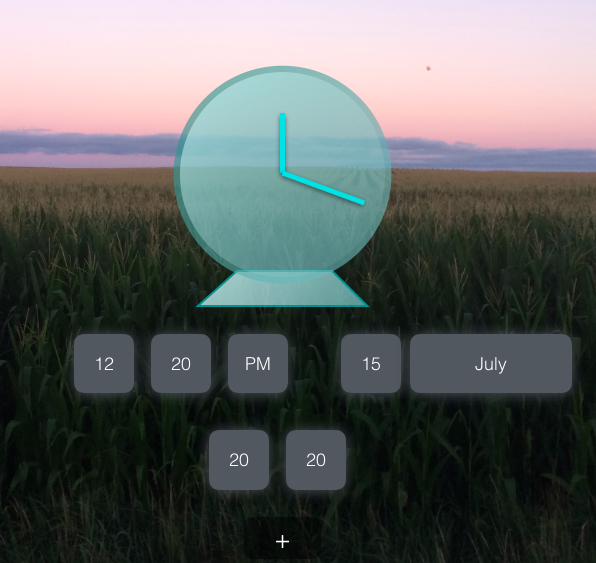 And anyways, that’s all I’ve got for now and hope everyone enjoyed my ideas!