cannot be said of the application menu.

I always wondered, why we do’t have a hey open deskbarmenu like command in the first boot script?

There is a quick tour and userguide icon on the desktop. If people don’t click there, guess what they will do with the quick tour window? My guess is they will go “I know this, it’s a UNIX system!”, close the window, and start messing around. Especially video reviewers who really want to do “I know what I’m doing and I’ll show you guys” type of videos, and not “I just sit there for an hour reading the user manual of an operating system”.

Video reviews are not the same thing as normal users getting their hands on the system. The fix for better video reviews is making a press kit with some help for reviewers (here’s the things to take care of in setting up your VM so you don’t run into network problems, here’s how to start apps, here is a few cool features to show). And also don’t forget to “roast” these people in their youtube comments (kindly and politely of course) so they don’t do such a mistake again.

We can also improve the user interface, of course, but it doesn’t have to be so dramatic. Subtle changes like a little arrow/triangle on the leaf button could do a lot already.

When it comes to the user guide, I fear that they genuinely just overlook the desktop icon or ignore it since there is just so much new stuff to take in, or ignore it expecting a lengthy tech manual. It doesn’t really strike me as a conscious decision to ignore it, more like people being used to there being a lot of random default stuff on their Windows desktops.

If it’s really them actively ignoring the icon to prove how smart they are, then I’m afraid they probably won’t really look at a press kit either,

Perhaps the first time the desktop is started on release builds, the Quick Tour should be automatically opened.

To make people lesrn faster where webpostives quit button is?

The firstbootprompt already mentions the quicktour iirc, if people dont even read that small snipper they will hardly read the quick tour.

I would remove the bebook from release builds, and change the deskbar Icon/UI slightly to make it more noticeable as a menu.

Other than that, why not do some grandmother testing? I did that once and deskbar was not that much of a problem but the german locale removing translated application names plus the untranslated deskbar folders made the system unusable.

Why do we have to have the same discussions over and over again? First search the forum and then inform, then write something.

We can talk about it then we release the first R1 and not for a beta. There is no one who have the time to manage this at the moment. There are enough other problems around.

Maybe people could discuss how to improve the quality of the reviewers , instead.

Maybe the “grandma test” could show some places for improvement, but some self-called reviewer of an operating system that do not try to automatically click on the only thing in the screen that is not obviously an icon ?

We need articles of people wh know Haiku and then explain how to use the system. And not only newbees

The discussion don’t fizzle, they reach a conclusion that someones needs to do something about it, and then nothing is done. Re doing the discussion step everytime doesn’t get us any further. What we need is someone to submit a patch.

It’s not a bad thing to continue discussing relevant issues. Just because no one has time to submit a patch doesn’t mean it’s not still valuable to have conversations about it, especially since different options/ideas can be brought up each time.

A very nice tutorial, video, about Haiku in VirtualBox from “The Retro Dev”:

In this video we will be installing Haiku inside of VirtualBox plus taking a quick look around the operating system. 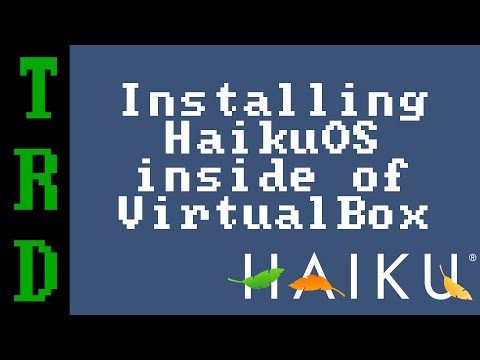