Hello there, im kinda new to Haiku, just installed it on my X220 laptop, everything seems well, but i have no sound.

I saw No Sound on HDA Intel this discussion but nothing helpful for me, i cat even configure Open Sound…

Help me please getting sound work, cuz i like haiku

opensound works for me on the X220. You need to install it (pkgman install opensound) and then blacklist the default hda driver by adding

to the blacklist file (https://www.haiku-os.org/guides/daily-tasks/blacklist-packages). After that you may need to tweak the settings in Media preferences to route the audio output to the right direction (jack, internal speaker, etc).

This is on x86, I don’t know if opensound is available for 64bit Haiku yet.

My MacBook Pro has the same chipset, I need to boot into another OS first, then reboot into Haiku to have working sound (only on headphone jack).

This is on x86, I don’t know if opensound is available for 64bit Haiku yet

Yes, it works great in 64-bit! My story is at No sound with Sigmatel 9205 sound device. Hope it helps you to get your sound up and running!!

This should be Package 'haiku' I think.

Indeed, I copypasted this from the other blogpost. Edited my reply now.

Ty guys for ur replies.
Okay i did this:
installed opensound.

In Audio Settings input and output i see 2 options - HDA and just empty line without any title.

I rebooted my system several times for sure. And now my wifi stopped to autoconnect for some reason and dont see my wifi point ( but see another ones ) ( fixed this by disabling/enabling wifi device several times)

hmulti_audio should not be blacklisted. You just need to blacklist the hda driver, add-ons/kernel/drivers/bin/hda as I said in my previous message. Nothing more, nothing less.

The audio output shows as “Intel HD Audio” in media preferences, and in its settings when it is driven by opensound, you get a quite wide array of settings named “codec1.jack.black” or similar. I have all these routed to “pcm1” and that seems to work for me, with the output channel set to “Output 0 (raw)”. You may also need to raise some of the sliders. 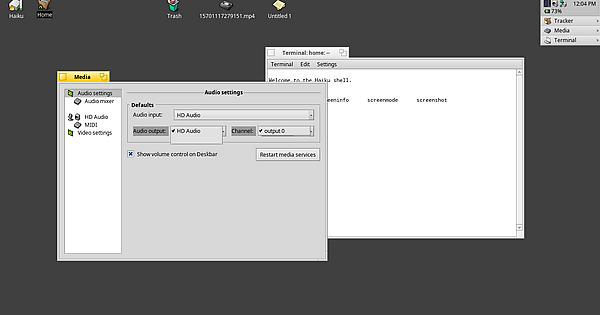 You used my blacklist lines; where if I remove one of these three, I lose my sound. I do not know what the relationships are between these three but I have sound. With that my Audio Settings is as follows: 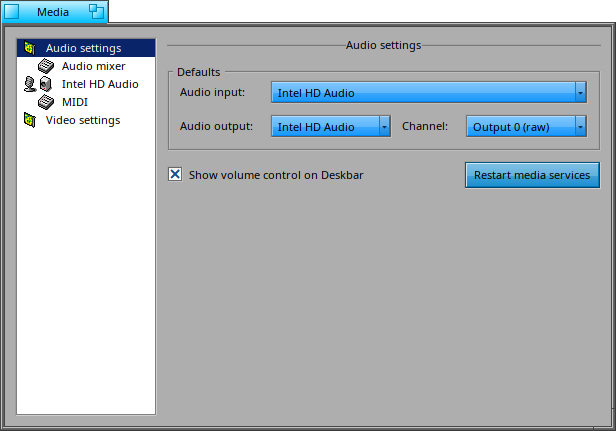 Hope that helps you.

Also, when I execute ‘osstest’, here is the output:

Welcome to the Haiku shell.

My device was busy due to Clementine being active (listening to my audio library).

The only problem - my sound works only in left channel lol. Did anyone have that problem? I tried difference options in media prefs, right channel definitely enabled…

I have a similar problem with an Intel iMac from 2007. There, default hda driver used to work but at some point (long time ago) broke and only one channel outputs sound. Found no way to fix it, all my attempts to use OSS failed, unfortunately…

I do not have that problem with my rig. I have stereo and will soon check if I have 5.1 or 7.1 capabilities later.

My problem is that if I connect headphones via the jack plug, my system still sounds through the laptop speakers and headphones simultaneously. I cannot figure out how to get it to recognize only the head phones…must be a trick somewhere.

And u know what guys? For some reason i decided to reinstall my haiku ( was playing with dualbooting it with OpenBSD) . I did the same configuration and now i have both speakers working. Lol. Feeling really blessed with this and i have no idea why only left channel were working last time

Thanks for this info. I was able to get sound working on HP DV7 6120tx laptop. Intel 6 Series/C200 audio. Have not checked to see if both channels but sound like it. Wonderful!! (Haiku 64 bit)