I know Pentium 4 with 512 MB ram may sound ancient but many people (specially students) still use these machines . Right now many people a stuck with Windows XP .

Can I install Haiku …?

Should I use nightly image on this experiment PC

I believe it should work. You’ll want to use a nightly as we started optimizing memory consumption, the last beta might use more.

Hello! I actually I’m using Haiku in a dual core machine, with only 2 GB of RAM. Take in acount that 512 MB of RAM are a bit “on the edge” of usability.

May I suggest to try to update the RAM to at least 1 GB.

I guess the more hard task in a limited computer like that, could be web browsing. Not because of Haiku itself, but because the most websites actually are a mountain of javascript garbage. In this context, I suggest you to use NetSurf browser, a very lightweight browser, without javascript support.

It shouldn’t be… BeOS only needed about 64MB, and realistically until recently Haiku needed under 128MB. Of course larger applications like Web+ and others need large amounts of ram on thier own but a functional system can be had without large programs like that.

Also despite work that has been done recently… Haiku still requires > 512MB ram to boot the installer. this is very strange though as when I set the ram on the VM to 640MB ram… I can boot it to desktop from the CD and only 168MB ram is used there so… something must be using alot of ram but only duirng boot or startup of the installer.

It shouldn’t be… BeOS only needed about 64MB, and realistically until recently Haiku needed under 128MB.

New features need more RAM. And, as we like to remember from time to time, we have not started seriously optimizing anything. The main responsible for the extra RAM use currently is known to be the package filesystem. If someone thinks that this is really a problem, we will happily accept patches to improve the situation there (except if it’s by removing the package filesystem, which we think has a lot of value).

plese CMIIW …i feel that package filesystem similiar that slax/porteus linux implemented?..(https://en.wikipedia.org/wiki/Slax)
the package is compressed by lzma or xz (newer) 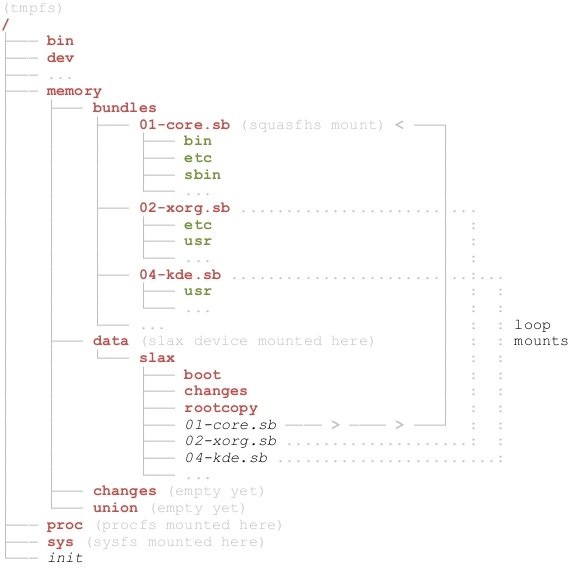 maybe if haiku can borrow compression scheme that use by linux (xz or lzma)… the ram usage will better?

Currently we use zlib, but that does not change the memory usage (it is slower, however). There is support for another compression format, I can’t remember which one?

The compression is done on 4K blocks to allow random access to the package, that is indeed a bit similar to squashfs. However, we push things a little further as we have no “base system” at all, even the kernel is inside a package and loaded from there by the bootloader.

Our packagefs is an all-in-one solution where slax builds a similar thing out of loop mounts, squashfs, and aufs above it.

As I pointed out haiku is only using about 168 or so MB after boot these days which isn’t that terrible… even though it will no longer boot and be usable on my Lifebook P1210 anymore but that is no great loss.

But it still won’t boot from install media without > 640 or so MB for some reason… dunno why probably loading all the pkgfs files in ram or something then unloading them??? Like I said it doesn’t use that much ram when booted to the live desktop so something must be going a miss early on.

I was able to successfully install Haiku Beta 1 on an old Compaq computer running a P4 Celeron processor. I was running Postgresql on it (amongst other things) for a few months until the hard drive recently crashed; now I have to buy an HDD or SSD for it. I tried to get Apache to work on it, but I couldn’t get it working although I didn’t do much troubleshooting to get Apache to work.

I know Pentium 4 with 512 MB ram may sound ancient but many people (specially students) still use these machines . Right now many people a stuck with Windows XP .

It doesn’t just sound ancient, it is in fact ancient. Almost all Pentium 4 cpus are both 32-bit and single-core. There have been mainstream dual and quad core 64-bit cpus for over ten years. = Also Windows XP came out in 2001 (18 years ago). And my old desktop from 2004 (an off the shelf compaq) came with 512MB standard.

Also while I think for someone in that position XP might be more usable, any 32-bit Linux will be more modern and run okay for the most part though 512MB ram would be rather tight in a lot of cases.

The LiveCD runs fine on my Pentium 4 machine (which has full Linux Mint install on the HD),though I have 4 GB of ram. I did have some initial problems with booting Haiku that I think were related to initializing the graphics card. The Haiku boot options though allowed me to get around that at least as far as booting and basic functionality. You will probably find that the basic stuff works okay, but some things may cause your system to choke, like web browsing or trying to stream media.

P.S.
I would like to second the suggestion above that you upgrade to at least 1 GB. At the low end of RAM amounts, anything you can add usually is a significant improvement. If possibly I would advise at least 2 GB though as that would be a lot more pleasant under any modern OS.

This doesn’t change the fact that cash strapped college students won’t spend money on a PC or cannot spend money on a PC. Most P4 PC’s can be upgraded to 2GB for practically free anyway… and even though they are slower they are not so slow as to make simple tasks impossible.

It also does not change the fact that Haiku should work and boot in under 256MB easily (with nearly 90MB free ram) but has a bug somewhere that causes high ram usage and or lockups during booting from the installer.

Unless we’re talking about some third world country that line of reasoning makes very little sense.

In the US for a relatively small amount of money (less than $200 probably) you could just go on eBay and buy a much newer and more powerful machine (3rd or 4th gen Core i3/i5/i7) that probably has 4 GB standard and could be upgraded to 8 GB easily. There is absolutely no reason for anyone to even consider something as old as a Pentium 4 when they can have almost certainly have a 5-7 year old,(instead of 10-12 years old) or newer computer just as easily.

then your aport to this is a “no matter if the software are optimized, i have money”…

Unless we’re talking about some third world country

That’s where your reasoning is flawed. We have users there and they deserve support as much (or maybe more so) as people who can afford a less outdated computer.

Not everyone lives in the US, and the relative cost of computers vs other things can vary a lot depending on import and other taxes, regulations, etc.

Take Brazil for instance… most PCs have an automatic 75-200% markup over what prices are in the USA due to import taxes and gouging. So people end up running old hardware much longer than most places. Hardware also holds value much longer due to this…

I was taking a computer literacy class there in high school in 2005 and they still had 486’s and 16 color displays in some of the PCs in the class. Just as I was finishing they upgraded some of the PCs to Sempron 3100 or so… running Windows 98SE of all things because costs

What about WLAN / Internet speed in Brasil?
Is it fast enough to use Haiku`s SoftwareUpdater?

Otherwise I totally agree. If only time was not moving that fast! Today new Tomorrow old!

If your city has computers and internet then typically there is adequate speed internet available.

Brazil is a bit different than the USA since they have dense cities so… upgrades are easier also WiMax style internet is pretty common not sure what frequency they run on but my dad was using ubiquiti hardware last time I was down there.

Yes, it should be possible. I’m using a IBM X31 on a daily basis with pentium m.
Browsing the web isn’t the biggest pleasure (with 1gb in my machine),
but you can still work “fast” and comfortable. and even if the comparison is unfair
and objective: it boots faster than my new macbook air

Can I install Haiku …? 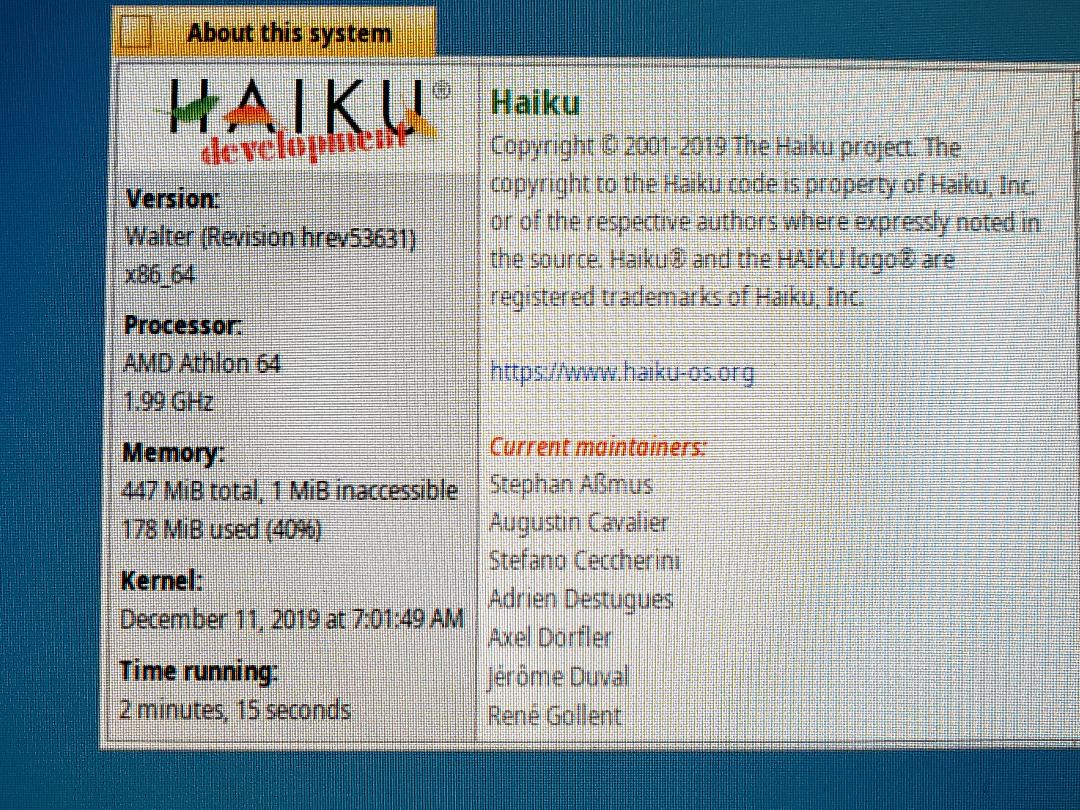 Netsurf is a pretty fast browser for just googling etc… if you don’t need javascript.