Thanks to the work of Diver and a few other dev/maintainers, we are very close to fully using VLC 2.2.8 on Haiku. 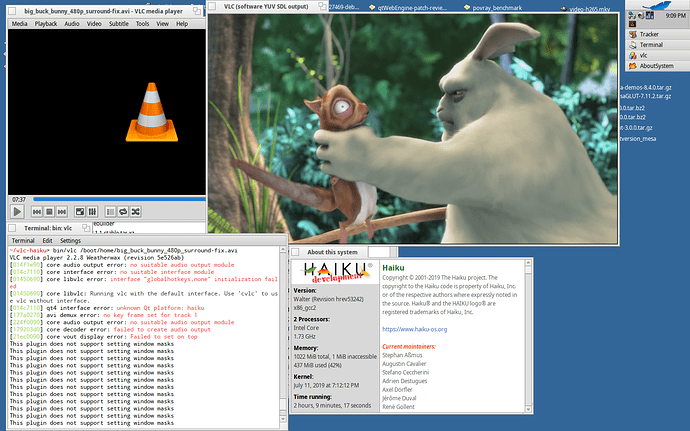 I use it now just to watch certain videos (no sound yet) and utilize some GUI/command features not in MediaPlayer. If the sound driver doesn’t work for you anyway, then no big deal - right?

So far, no more crashes or major showstopping issues (besides the already known stuff). I can say it is pretty stable on my laptop and desktop (both 32-bit and 64-bit builds). We are starting to look into the Haiku audio output module for VLC and then the nostalgia begins. I like to use the subtitles feature too…

I hope to see VLC in the repositories soon… thanks for your work!

Well, this was the status of VLC for years now. Video works in a separate SDL window, audio doesn’t work at all (though there is a WIP support for that by @CodeForEvolution).

And since in its current state VLC is essentially useless I disabled the recipe at haikuports a few years ago. We also can’t update VLC since there is no support for SDL video output anymore so a native video output module needs to be written.

Indeed. So, why post this now on the forums @cocobean?

And since in its current state VLC is essentially useless I disabled the recipe at haikuports a few years ago. We also can’t update VLC since there is no support for SDL video output anymore so a native video output module needs to be written.

I read your previous posts. Well, I actually fixed some of the audio output module yesterday and aligning the headers and code to the current Media Kit and /dev/audio/hmulti/hda. CodeEvolution gets credit for what he has done as well.

Basically, we’d want to get to this point: 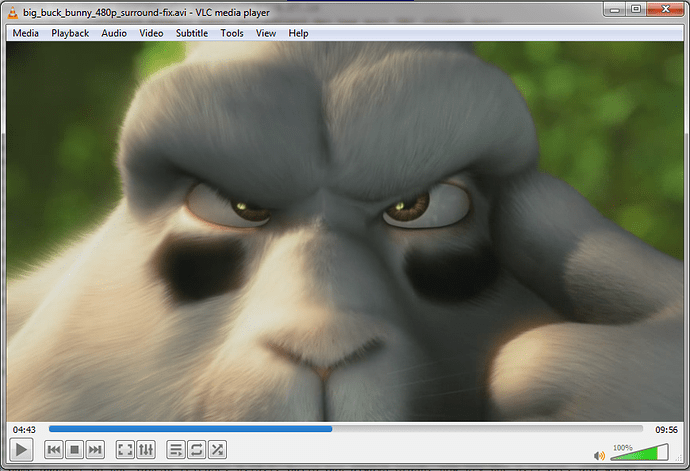 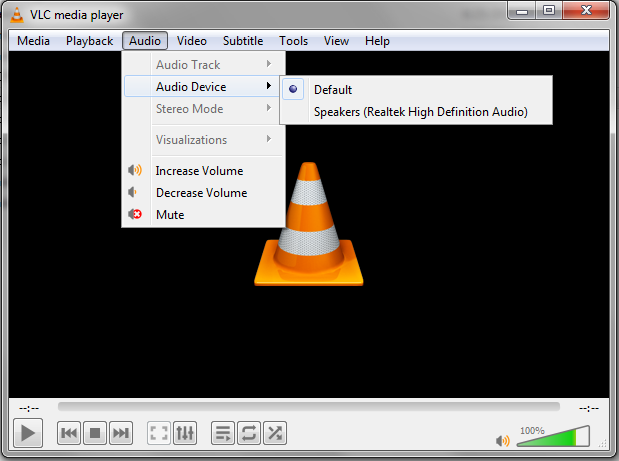 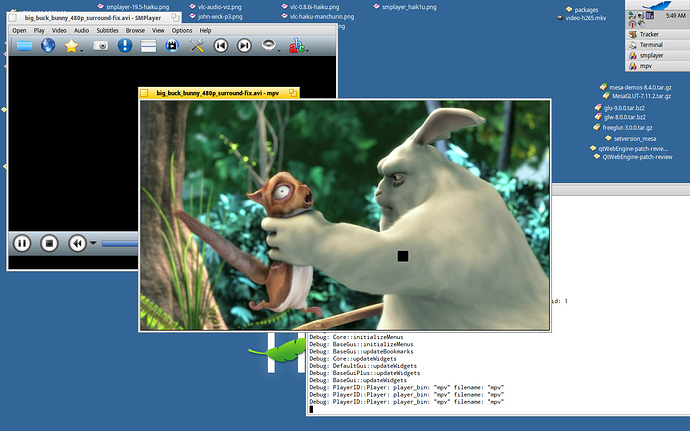 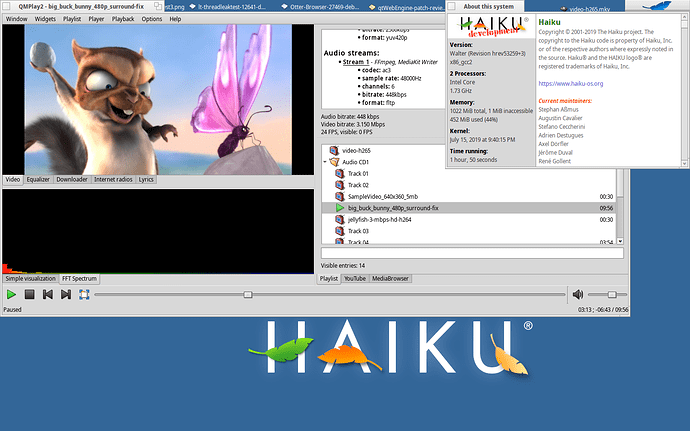 So, I know what you are defining as “not working as it should on Haiku” because it doesn’t look like those two screenshots (video is not within player control frame on VLC 2.2.8 for Haiku nor working audio component).

Yet, that doesn’t matter for me as I needed to use it in a separate window for multi-monitor use and some DVD playback purposes. No audio was needed. Otherwise, I have MediaPlayer, SMPlayer, QMPlay2, mpv, etc. for those purposes (i.e. audio enabled). Otherwise: ‘mpv --no-audio --fs --sub-file=blah.txt blah.avi’
is similar in a basic sense. But, the current video output performance on VLC 2.2.8 is superior on my laptop
when I compared with mpv on hrev53259+3 x86.

Basically, GUI controls on one monitor and full frame video on the second monitor (this is using Haiku’s multi-monitor feature in Screen preflet (not some hack).

I was walking though the VLC bug reports and mentioning if we can start making the improvements to
VLC 2.2.8 to retire the BeOS vlc 0.8.6/1.0.4 builds used for Haiku and fix those old VLC bug reports.

I have the audio output module code still on my printer from yesterday. Just need some mocha…

How is it relevant here? Did you changed something in the hda driver or…?

Btw afaik YUV video output will show up always as an extra window. Even on other systems, according to google.

I was walking though the VLC bug reports and mentioning if we can start making the improvements to
VLC 2.2.8 to retire the BeOS vlc 0.8.6/1.0.4 builds used for Haiku and fix those old VLC bug reports.

The bug reports on the tracker are Haiku bugs VLC uncovered. Updating to a new VLC will not fix these, so they must stay open.

@extrowerk - Thanks for your help overall. I’m speaking on the VLC audio workflow: VLC -> Media Kit -> native/OSS drivers -> audio hardware. There is a OSS plugin. Pulkomandy and korli are the great Oracles here. I expect <=3 minutes of their IRC time solves the VLC audio input/output plugin ‘bugs’ with Media Kit? I’d work with CodeforEvolution (and Diver) on any audio issues. You can jump over into the walled garden too if you want. I admire your multi-platform OS emulation expertise…

Btw afaik YUV video output will show up always as an extra window. Even on other systems, according to google.

This was the old VLC 1.0.x Xvideo output style on Ubuntu/Linux/BSD…

Please stop relying on the same people doing 99% of the work. I have more than enough things to do already.
And I’m not “great oracle” or whatever, I’m just trying to fix the bugs I hit. I watch few videos on Haiku and if I did, I’d rather spend time on the nice, simple and already working MediaPlayer than on VLC.

Please stop relying on the same people doing 99% of the work. I have more than enough things to do already.

We’re not. But, feebly paying some RESPECT.

CodeforEvolution is doing massive work on a VLC 4.x port. So, users can follow him. I manage to get the
audio code somewhat working/compiled so: inch by inch, row by row, … just needed a rake and a hoe…

Speaking of which, VLC 4.0 now compiles and runs!

However, it can’t play anything at this point and needs more work. (Even the GUI looks broken) 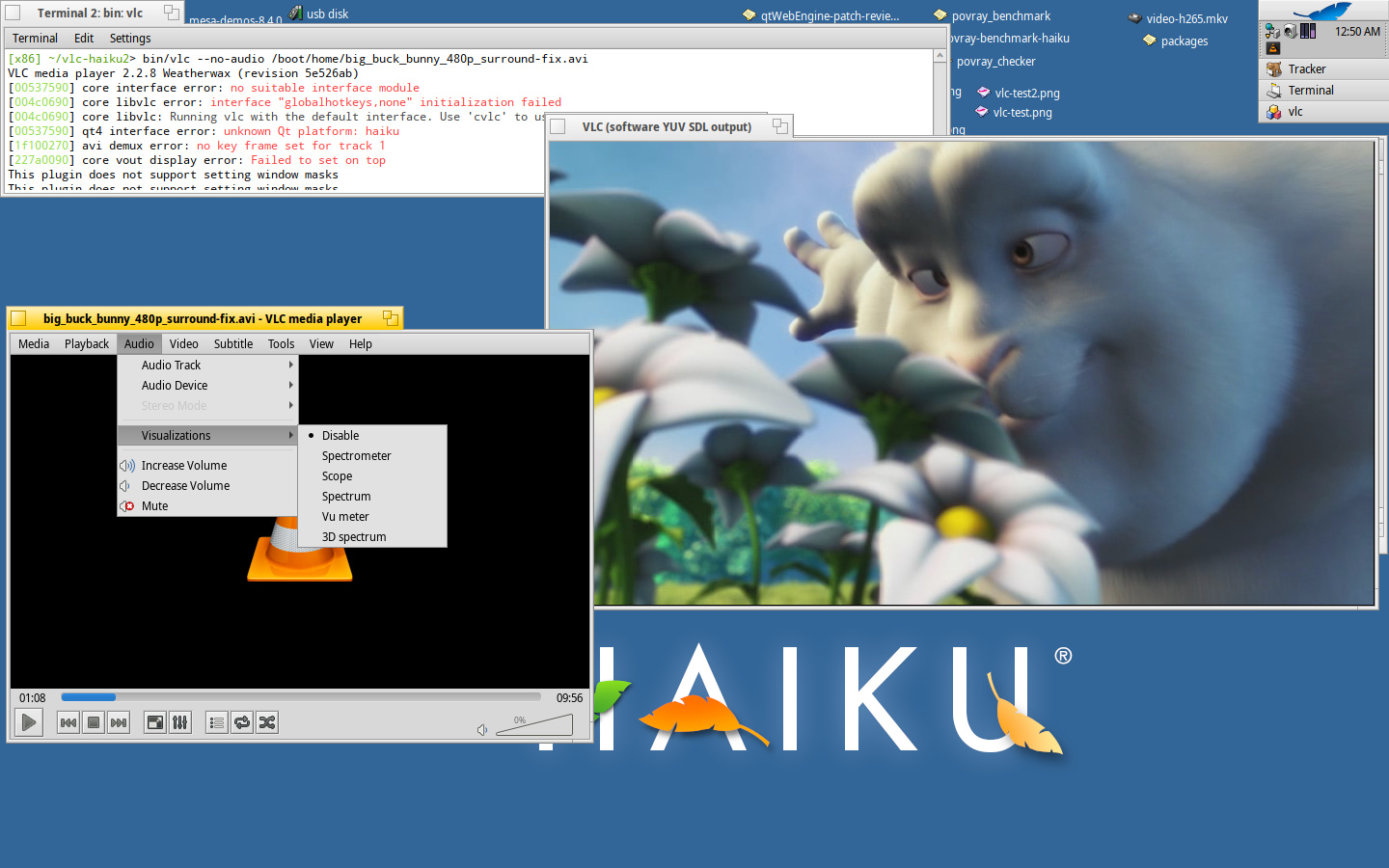 @CodeforEvolution - I think we have liftoff… I fixed it enough for now. A few minor things to debug
but no audio module missing error. The audio GUI shows visualizations and the volume control options now…

Where can I get it to test?

After looking at VLC 0.8.6i for BeOS, I noticed it was basically doing a similar video output in its own window - as it does in VLC 2.2.8 on Haiku. Audio works fine. GUI works fine enough. DVD/Blu-Ray playback, and DVD/Blu-Ray GUIs work fine. Very easy point and click the DVD entry in the VLC GUI and it works great as a media player (just File->Open Disc->DVD, then use DVD/Blu-Ray GUIs or it autoplays). VLC 2.2.8 changed with a more advanced setup (like MediaPlayer) - but you can still play the DVDs. Good/bad here.Tested on hrev53280 x86_gcc2

NOTE: MediaPlayer still requires finding the right video file on the DVD/Blu-Ray disc. You can play the DVD/Blu-Ray, but this is moreso a hunt-and-peck method with VOB files than working like a standalone DVD/Blu-ray player and brought to the DVD’s GUI… MediaPlayer has issues with some DVD GUIs. Otherwise, it works fine on playback, but DVD/Blu-Ray GUIs are still an issue. 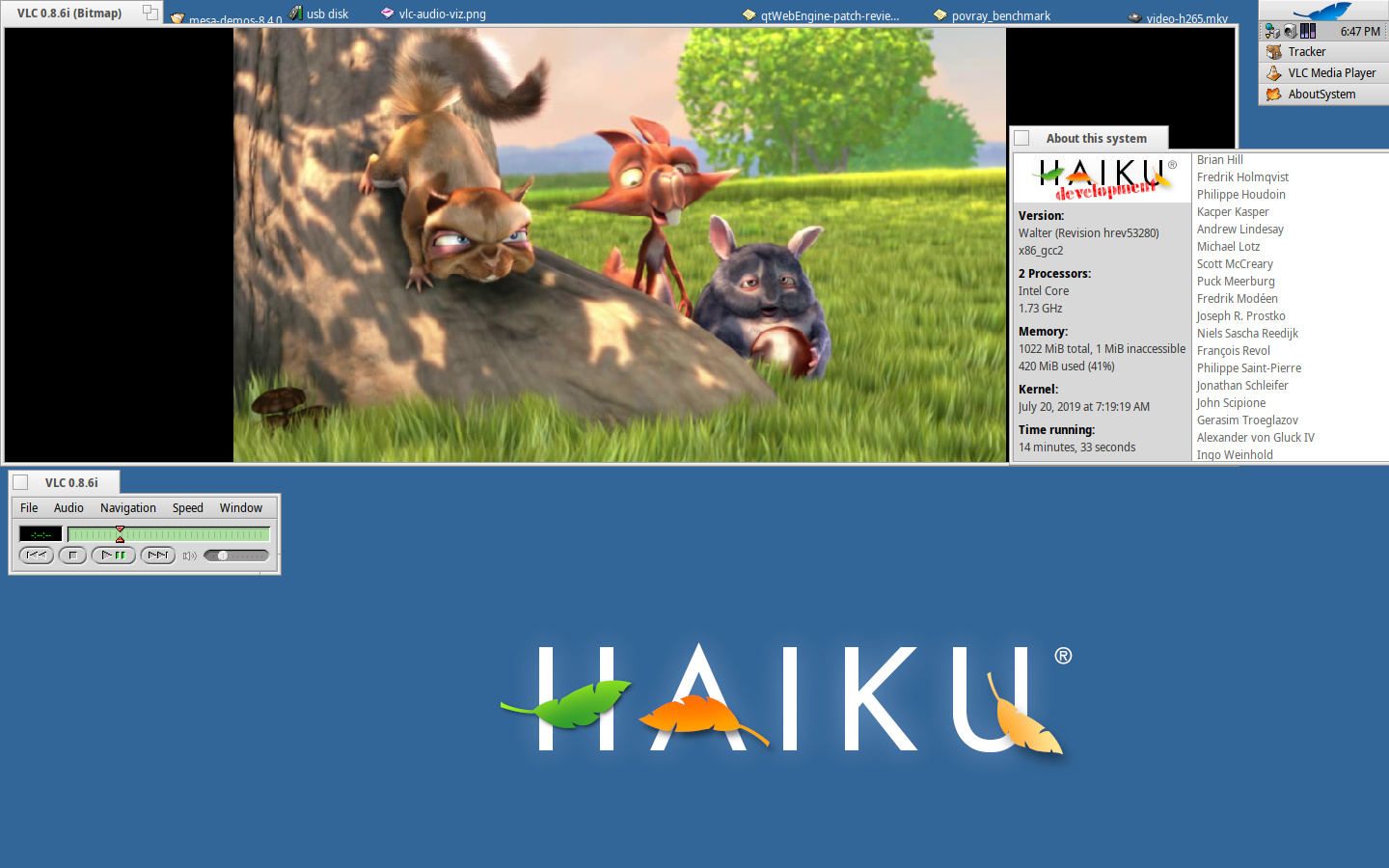 So, I now have a better feel for how things worked on VLC 0.8.6i on Haiku and isolated a few current issues.

It is not available because audio output doesn’t work yet. 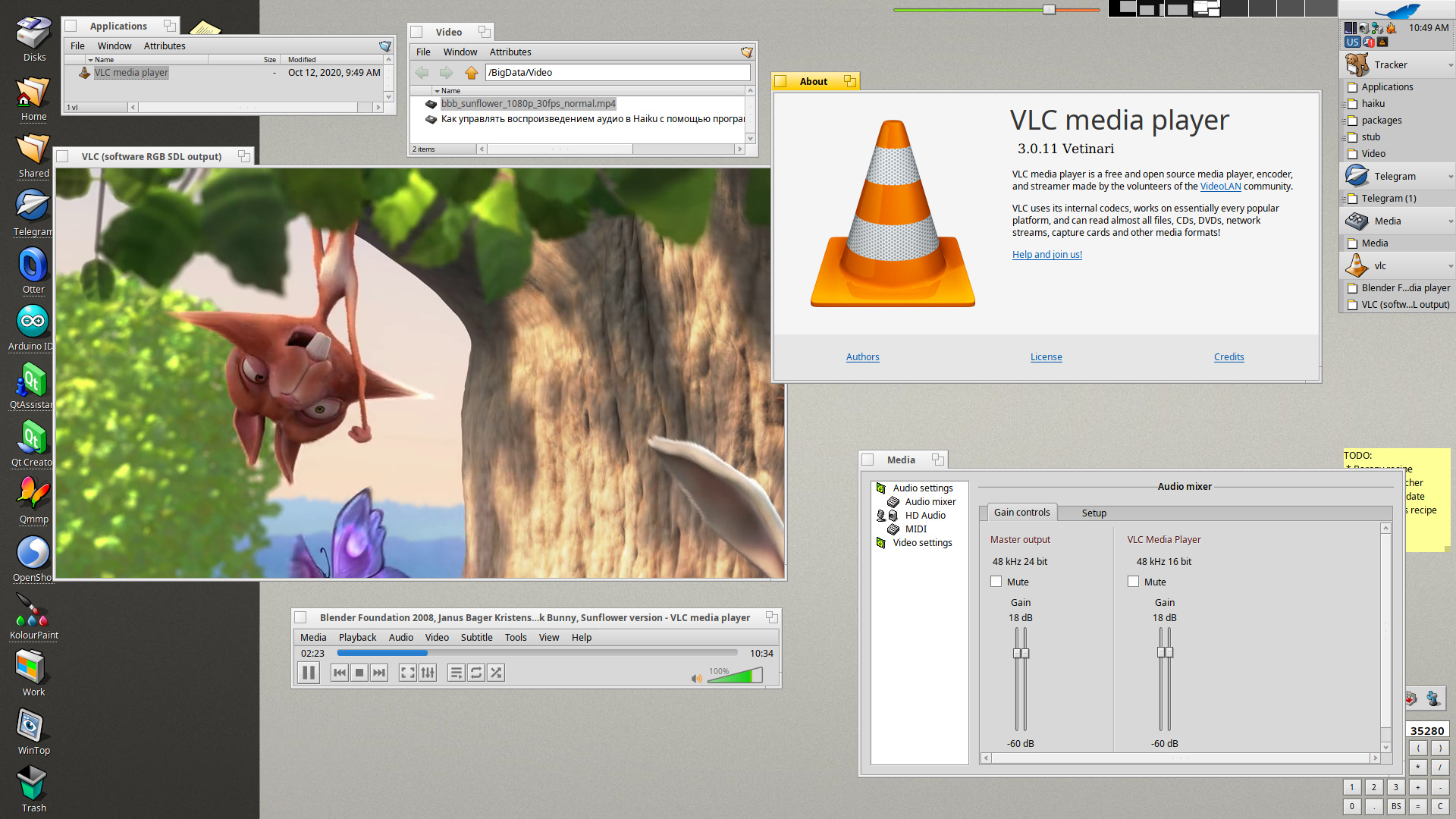