Has anyone had experience with display tablets yet?

I am using Huion KAMVAS GT-191 … it is not even recognized as a secondary monitor, so no signal on it at all

I remember there was a Linux kernel driver written for it 2-3 years ago (called Digimend driver, something like that) … later on it was implemented, so it is automatically recognized upon boot (except callibration, that needs to be done separately).

No signal because Haiku does not support dual monitors yet. That is what is keeping me from getting a Huion pen display. I use the pen tablet, the Huion W1409 and works fine with Haiku, but it’s not a pen display.

You’ll have to wait until the dual monitor is fully supported. And, you could do a test, which is only plug the Kamvas as a main monitor, and disconnect the other monitor, and test if the pen display behaves properly as a pen display. I mean, you can draw and do stuff. I presume the touch screen would be recognized as an USB device and might behave as mine. Let us know.

Turn off the computer. Unplug your display, plug the Kamvas with all the wires, Video and USB. When everything is set, turn on the computer and test the Kamvas.

Beware of the USB cable connected before turning on the computer. I always get KDL crashes if I plug my Huion’s USB cable once Haiku is running (already ticket for this).

I have tried that too … Huion is recognized, but only as a screen.
So the pen is not working at all

With that setup again, and even if the pen is not working, launch the terminal and run the command listusb :

That command will list all usb devices connected to your PC. As the Kamvas has an USB cable, I understand that the touch/pen input will be managed by USB. In the screenshot I posted, the third line says “Pen Tablet”. That is my Huion W1409. Theoretically, you should see something similar, indicating that your touch/pen screen is there. If it’s not there, then might need to file a ticket.

If it’s there, that’s a first step. I’m presuming your pen does not need charging nor battery, so can be used 24/7 unless mine, as sometimes I forgot the pen’s battery drained out and of course I get no input whatsoever. If the touch/pen is there and not responding to pen movements, then will need to file a ticket.

In my case, I don’t get the click on tracker though I get clicks on Krita and other software.

Let us know how this is going.

It has listed the tablet itself, but pen is not recognised . 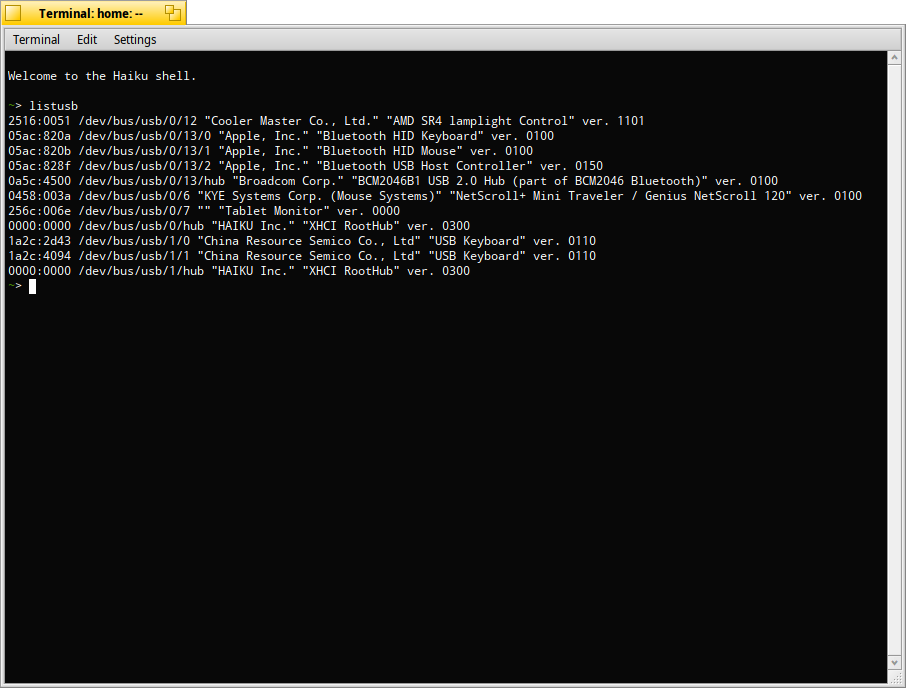 Yes, you’re correct, it doesn’t need charging or battery.
I remember that upon running the equivalent usb listing command on Linux, it shown them separately ( something like Tablet Monitor and Pen Pen )

Not related to this, but kudos to Haiku, it registered Apple’s Magic mouse and keyboard

That’s “normal?”, there is no “pen pen” on Haiku. At least with my Huion there is none either and I can use the pen. The tablet also should appear inside the Input preferences, though not identified as tablet. Good thing the identifier is the same, I presume.

Therefore, I asume you should file a ticket, but before, check out these two:

Those are the ones I filed regarding mine. Check them out, mainly the first one, as in that one there is a procedure you can follow in order to get more info to add to the ticket.

Yep, tablet appears in the input preferences as well. I guess that’s normal that it doesn’t show a pen separately.

Btw, how can I ‘‘install/implement’’ your patches? Maybe they would work for my device too

Thanks, but I’m not the dev, I’m just a regular user, so I haven’t developed any patches

. Those patches referred to in the ticket might be already included in latest Haiku nightlies, and might be because of that that I can use the Huion to “paint” right now. Also, USB XHCI is getting better too, so hopefully

soon you will be able to use the GT to paint.

So are you suggesting upgrading to nightly? I am currently on the Beta 2 (btw, I had a first crash yesterday lol … I was watching youtube in Webpositive + Haiku community opened only )

Maybe not move to nightly, but test with nightly and see if with the nightly it works. I’m on nightly everywhere… Maybe I should move to beta?

Just need to install nightly onto an usb pendrive and test it out.

Crashes happen sometimes, even on other oses too

Just remember what the “smart one” said: Be watel my fliend

Good day @roiredxsoto ,
Stupid question, but how do I actually get nightly images?

What I could find searching in the browser seems very confusing

Blockquote Crashes happen sometimes, even on other oses too

Got it after all … I will give it a go. Maybe it supports GT already somehow.

I have booted into latest nightly live.
Pen still doesn’t work … I have even tried my Wacom Intuos Draw, that doesn’t work either

Both devices are still listed though, but no idea why Wacom is not functioning.

Looks like my old Wacom does work, and does not report the pen either:

And opposite to the Huion, with the Wacom I can do a Click with the pen, and can plug/unplug with Haiku running without KDLs. This with the latest nightly up to date:

Check it out and see if now it works for you.