RC0 is a potential candidate for the final R1/beta3 release.
Please perform testing and provide feedback in the usual places.

As usual, please test and report issues to https://dev.haiku-os.org

Otter does not allow me to browse the forum though (I get a blank page) so not sure it can really be recommended.
Problem is not related to Otter but to Discourse (somebody on IRC mentioned that the completely blank forum issue also happens with Safari on MacOS), so something may be wrong with our Discourse/Haiku theme.
Looks like newcomers testing this release will find it difficult to access the forums

Maybe an explanation on how to update R1B2 to the RC? (so far it’s only mentioned to change the repository for haikuports).
At this moment there is no way to install for instance VLC (as someone also mentioned on IRC) or update the system.

Changing the repos and doing a full-sync should be sufficient.

after adding those in repository preferences and disabeling the old ones just running SoftwareUpdater should update the system.

If you go this path please comment on this ticket if you encounter any issues: https://dev.haiku-os.org/ticket/16126

EDIT bumped both 32bit (VirtualBox) and 64bit (native) to the new RC, 32bit WebPositive doesn’t seem to suffer from text disappearing where on 64bit the issue is still there.

maybe dumb question… Is it possible to test the beta3 just by using a nightly?
Or do I have to make a usb-stick and install it again?

Wow that would be very helpful and great, because Web+ runns great now!

You can follow the instructions I provided above to go from a nightly to beta3 aswell.

You can upgrade in place.

Update all packages to r1beta3:

I’ve tested the upgrade from nightly and R1/beta2 releases. No issues so far.

I think you already mentioned it that on 32bit it worked OK (at IRC and here) ?
EDIT my bad, that was @BrunoSpr

I have reports WebPositive works “better” on 32-bit images. The text disappearing happens more often on 64-bit. Unsure of why so far.

I have reports WebPositive works “better” on 32-bit images.

No. I can reproduce it on 32-bit (using physical hardware, not VM software). The web page text snaps back with a little mouse scroll click or highlighting text. So, it is not just a 64-bit thing (I was hopeful last nite on that being the issue).

GraphicsContext changes were made as well.which I mentioned during upgrading to Webkit 612.1.x->612.1.25. The HTML(5) feature check points out something is amiss. I’ll post some comparisons with Webkit 610. The Haiku Webkit+ patches need a double check on web page Font/GlyphPage handling - but I think the HTML(5) test issues is part of something as well…

Why are you not adding stuff to the ticket on trac? It’s really hard to follow what you mean, especially if you bring up so much different stuff…
if specifics have regress compared to older haikuwebkit versions please open specific tickets for single issues, forum posts of saying that something has to be checked doesn’t help much, especially if i do not understand why you want it checked, what should I be looking for in GlyphPage handling for example?

should I be looking for in GlyphPage handling for example?

This is moreso reviewing BView for clipping issue(s) during window resizing, re-rendering or text scrolling.
I was focused on GraphicsContext and the Haiku patches surrounding BWebView->Bview-> (/Font*/Glyph*) and the buffers used (UChar32 (buffer)) etc…

NOTE: The testing for the text disappearance issue on Haiku R1B2 x86_64 is not reproduced with haikuwebkit 1.7.0.

if specifics have regress compared to older haikuwebkit versions

I’ll put the details in a ticket.

I see, I thought you were reffering to webkit tests… It’s not that important what we score on that test, it only tests for general features webrowsers could support, some of which we don’t and maybe don’t need at all (device rotation, geolocation, drm)

Then there is stuff we support but safari, e.g on iOS does not (per default): webp vp9, vp10, ogg theora.

The test doesn’t check for it but there are also features we don’t support because webkit doesn’t want to. for example webmidi

Anyhow, the score itself is not that usefull, maybe specific tests are though.

Not exactly Web+ related, but with Medo I have noticed that some of my BViews fail to be marked dirty (in order for Draw() to be called) when I move another BWindow over the app. Changing focus and doing anything to invalidate the BView chain (eg resizing which invokes FrameResized) resolves the issue.

It is possible thate both Web+ and Medo run into the same view hierarchy repaint bug. 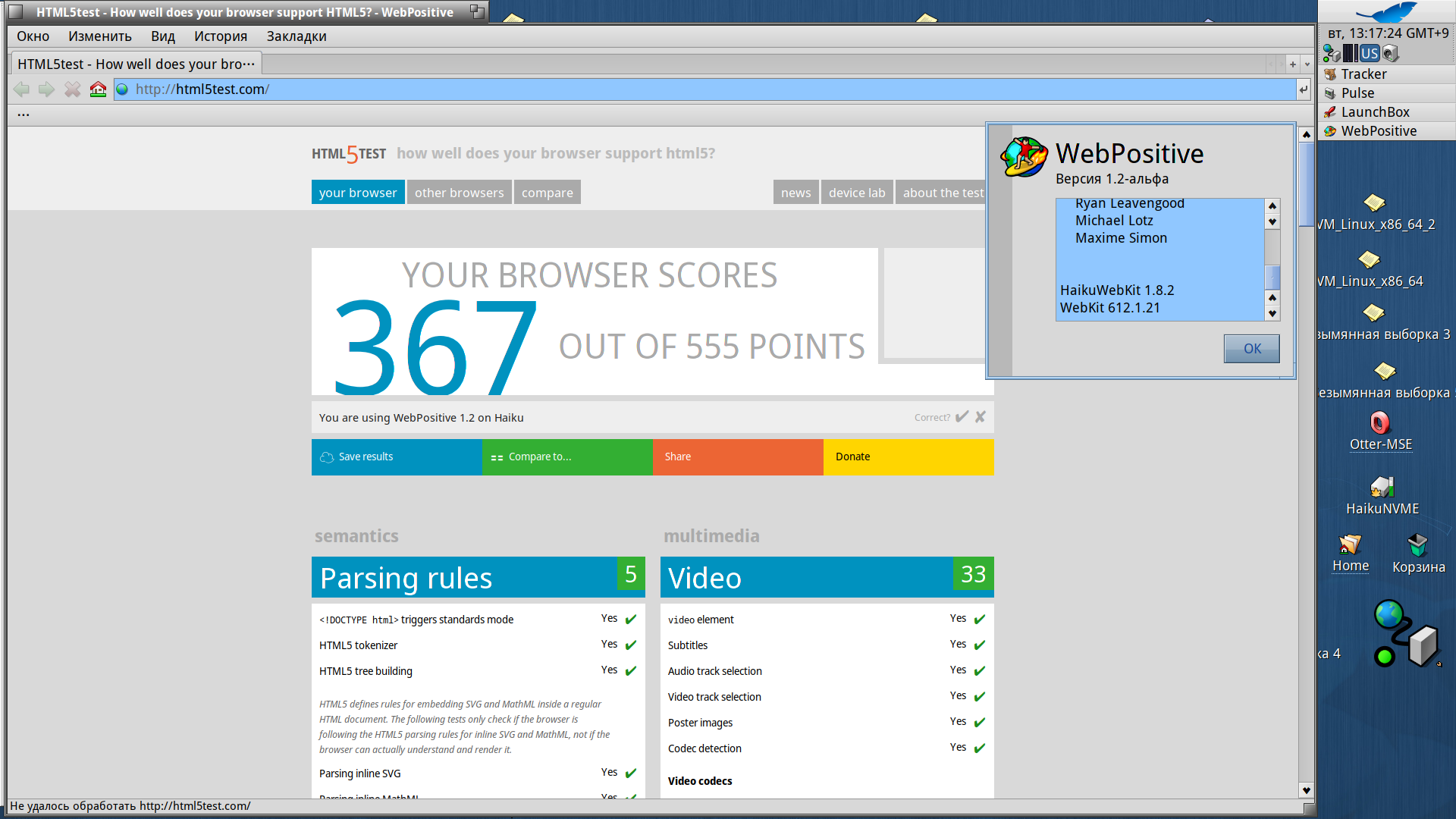 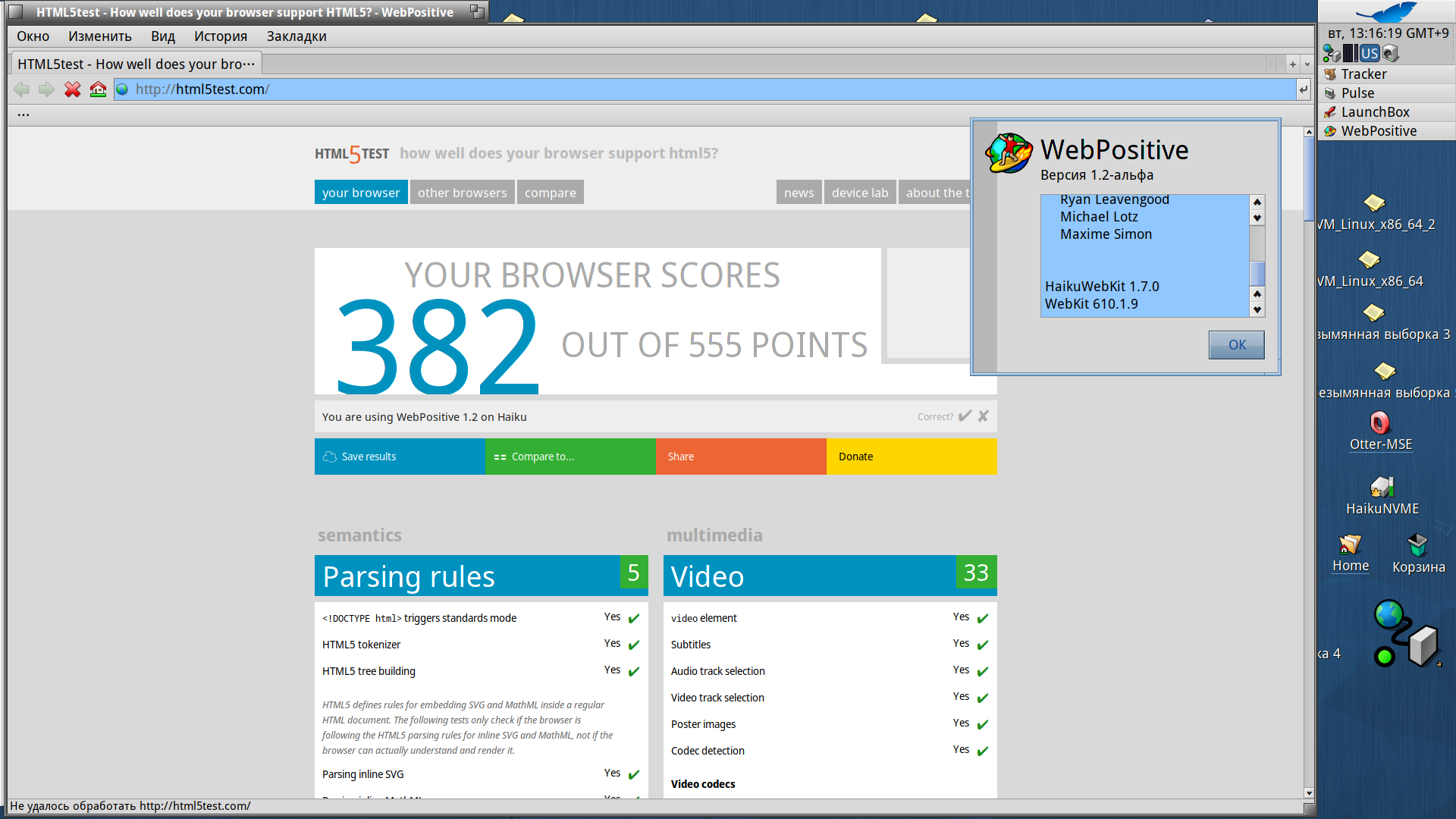 I see, I thought you were reffering to webkit tests… It’s not that important what we score on that test, it only tests for general features webrowsers could support, some of which we don’t and maybe don’t need at all (device rotation, geolocation, drm)

Also, it does not do any test to check if the features are actually working. It just asks the browser “do you support this?” and the browser says “yes” or “no”. That’s all. So that is often not very helpful in finding bugs like this.

I see in your screenshots that the logo got its shadow back? I had removed it in a few places because it doesn’t look that great (mainly on the boot screen, I think).

@humdinger (since you designed this, you are now officially responsible for it), what do you think? Should we keep the shadow in the logo? Doesn’t look so nice to me and removing it would look a bit better, I think?