You can change the language in the link

@Begasus To be honest, it’s not easy for everyone to figure out and the language menu should appear on all site pages.
@DFergFLA Normal donation to Haiku goes by Haiku Inc. The Inc will then pay for infrastructure, boots on events, hire a dev for a specific task etc. Without that, there’s no forum for example.
A donation via liberapay on the other hand is a direct personal donation to people that are also Haiku or Haiku community devs. They may use this way to get retribution for other things than Haiku. This said, it happens that people are glad when a bug that was annoying for them is finally solved and they want to give something directly. But devs don’t want to enter a game where people would turn it the other way and pay to get something fixed. So it isn’t hidden but not advertised partly because not directly linked to Haiku.

To be honest, it’s not easy for everyone to figure out and the language menu should appear on all site pages.

A quick search on google revealed some info for this

Only took me about 2 seconds

@Starcrasher Ok, makes since. OTH, I have setup my monthly donation for the devs. They may even be able to buy a 1/4 gallon/liter of gas/petrol with it… maybe…

Anything to help the devs keep going. Even if it just buys them some extra caffeine.

Keep up your great work !

Anyway there’s an official place (aka github workspace) to spread ?

Some other (maybe inspiring) suggestions:

Last but not least, it would be great - and may help to speedup the project evolution - to establish some kind of collaboration with other NLE projects.

Thanks for the suggestions. At this point in time, I have one primary feature left (sound record via mic-in), and tons of bug fixes to do after that. I’ll also go through the motion of editing a fully featured sequence, to identify any pain points when dealing with a proper project. I was planning to open source it once it is in a respectable state, since you only get to make a first impression once, and I want to create a decent first release. Its harder to get contributors when the project is in a rough state.

I expect to start preparing for initial release in 6-8 weeks, so maybe if all goes well I can time a release for Christmas.

Thx again for the kind words of encouragement.

At this point in time, I have one primary feature left (sound record via mic-in), and tons of bug fixes to do after that.

I guess there is nothing wrong with the following development shortcut:

The menu item will spawn the built in application SoundRecorder, and I rely on the user to save the recording somewhere and import that into the project. Not as clumsy as it sounds, and this moves the project closer to release. Later on we can worry about inter application messaging to skip the save/import steps. Moving on …

New screenshot. I think I’m feature complete, now just ironing out the major bugs, adding polish, pixel alignments, things like that (ie. the other 90% work). One major obstacle that I must fix before release is getting everything working with mixed resolution sources. I’ll planning initial open source release before the end of the year … 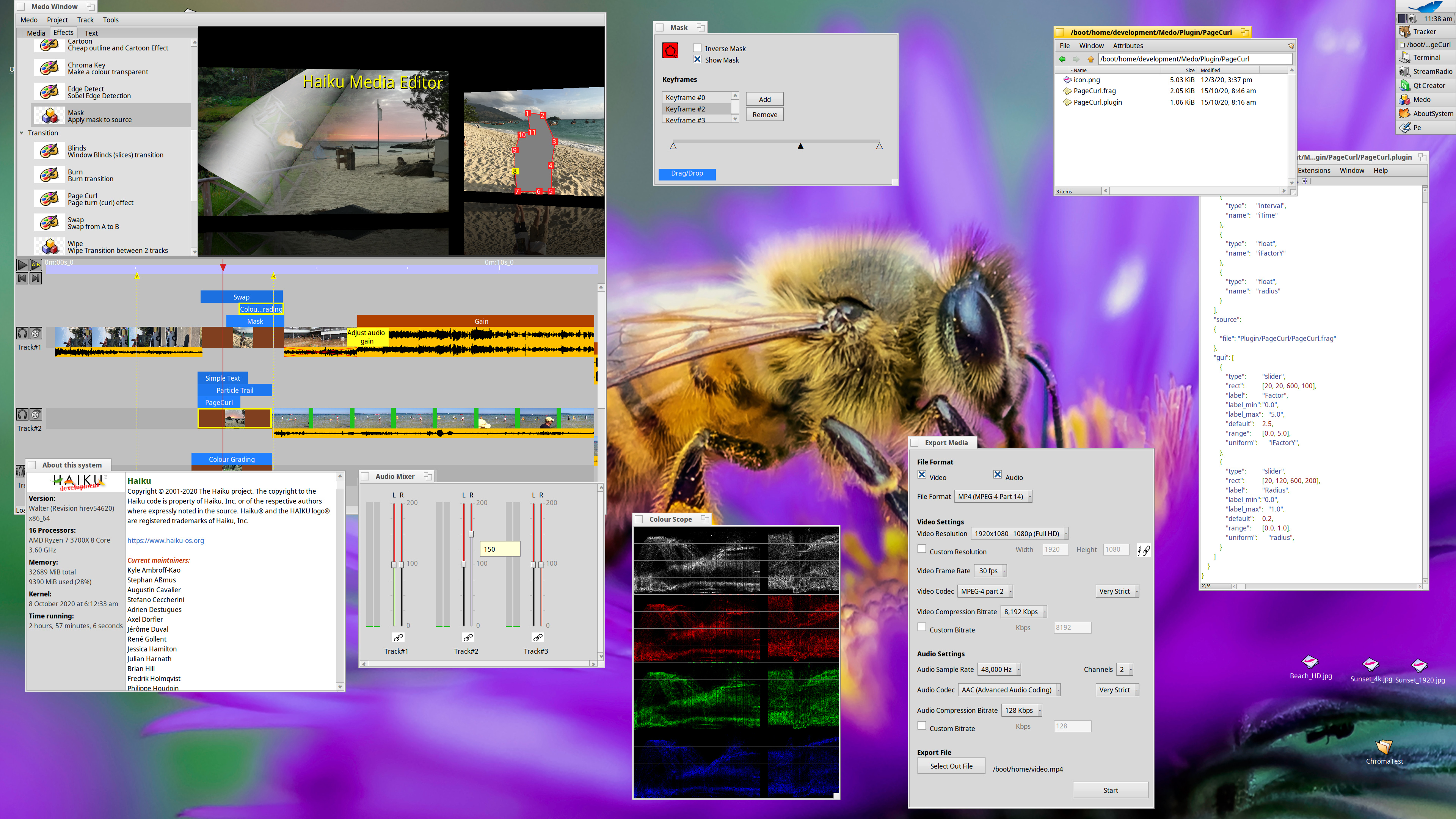 Some major bug fixes and we’re getting closer to release. Latest screenshot:

Notice how the effects are stacked: 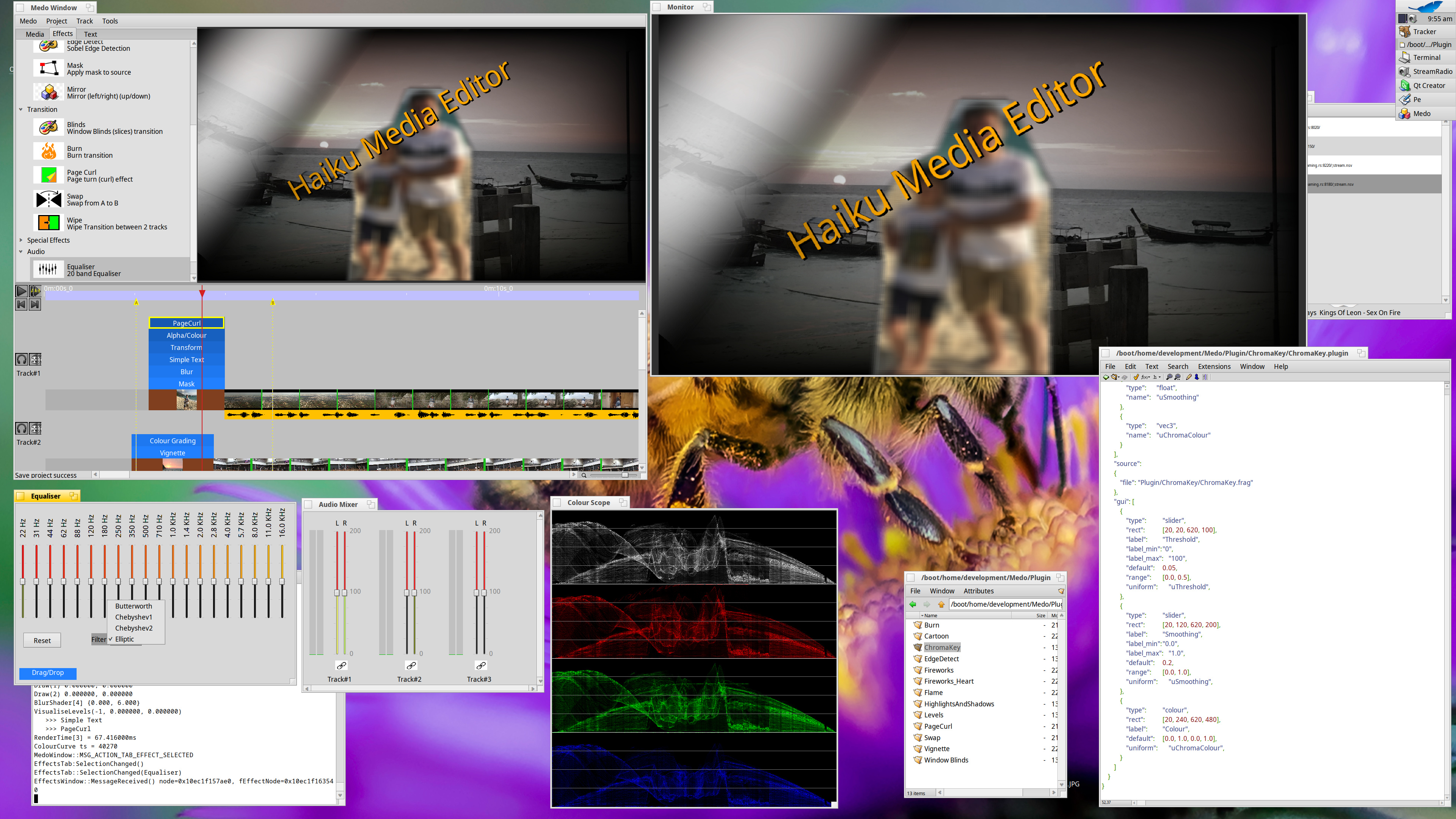 Expect release just before Christmas, so in 3 weeks or so. 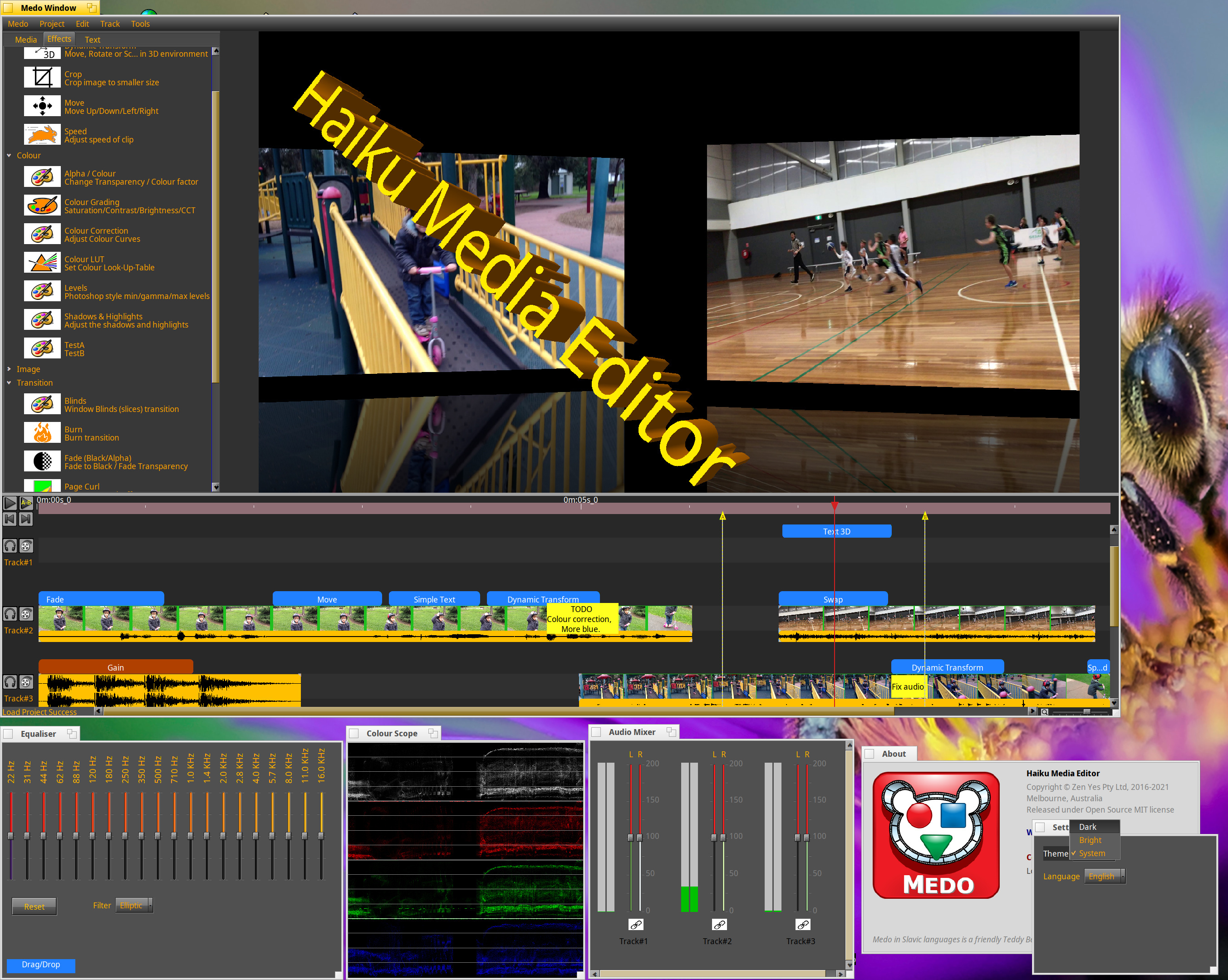 Anyone know how to configure the Tracker text colour?

It is always black as it is intended to be.
You can have it of a different colour (panel text colour) but it is a trick (In Background app, for DefaultFolder check icon label contour then Tracker icon view will have colour but not list view unless you switch to icon view then back to list view) so I’m not sure that you can reproduce it calling Tracker from an app.
Maybe this other trick will be easier to reproduce. Create a folder in icon view, make a shortcut to it on your desktop, start to navigate from there.

Expect release just before Christmas, so in 3 weeks or so.

Wow, that’s sooner than expected. Congrats!
Hmm… since you used to announce that your first release will coincide with Haiku R1, does that mean…? j/k

Try to imagine Haiku devs faces if you were the project leader and you just announced that. Scary.

Anyone know how to configure the Tracker text colour?

Try to imagine Haiku devs faces if you were the project leader and you just announced that. Scary.

Good thing we have no project leader!

Currently beta3 is scheduled on Trac for early 2021. We’ll see how things go.

The first release is a beta, one of many, so obviously the final “release” will coincide with Haiku R1 final

My two reviews pulkomandy mentioned above are now merged in hrev54742, it should now respect B_DOCUMENT_TEXT_COLOR.