I have to use Haiku beta 2 with Vesa driver. My intel driver is not supported so far. I liked to watch some mp4 videos with Haiku and some problems.
Using the Haiku MediaPlayer ends with normal sound but with pictures in slow motion (half speed?). So the videos could not be played with the MediaPlayer.
The next try was using Qmplay2 with the same videos. Qmplay2 is much better to use for mp4. The sound and video are both in normal speed but unfortunately the sound was a little tick before or after the video. It was really not much but this little mismatch is in the whole video. Much better than the MediaPlayer.
My last try was the VLC media player. Et voilà! Sound and video are synchronized and the videos were all played well. The VLC Media Player is even on FreeBSD, Linux and Windows my favor.
But I don’t know why the Mediaplayer has this problem. The mp4 codec is available, evidenced with VLC. I hope that the Mediaplayer will play mp4 in future as well.
I like to use the default system apps for any use and only look around for other software if I have to.

Please give more info about the used video codec.
In VLC you can look into the video codec info!
use Ctrl or Strg + J
…to get the needed Info!
mp4 is only a container and not the video codec!
Thanks for investigating…

The mp4 codec is available, evidenced with VLC.

I’m watching online videos from the https://mediathekviewweb.de. These are videos from TV (ARD, ZDF, ARTE).
I played them also with Mplayer in the terminal. It works fine too. Here is a screenshot of the codec: 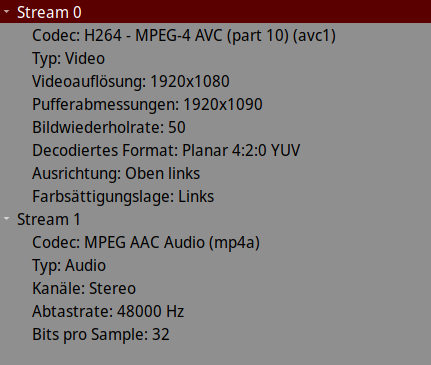 This is the video which causes the problem in MediaPlayer.