Attempting to transfer files between two remote Haiku machines. They’re both running SSH server. I can connect to both of them using FlashFXP, but can’t transfer files etween them. According to the FlashFXP documentation, they say:

"Both FTP servers must support PASV and PORT mode and allow PORT commands to foreign hosts.
In recent years many FTP servers have started shipping with the default configuration set to deny site to site transfers due to possible security concerns. So its left up to the server administrator to explicitly enable it."

Are these settings possible in Haiku? Thanks,

If you just need to transfer files you can use Telegram, or just use BeShare, but sure you know already.

I gather you have FlashFXP on a Windows machine, and are trying to talk to two Haiku boxes to directly transfer files? (I don’t know the app). There may be another problem, independent of FlashFXP. The other week I was installing beta 2 on an ancient Thinkpad, and I wanted to grab stuff from my usual Haiku laptop. I was using FtpPositive, but it failed even to see the files on the other machine properly. I tried in the other direction with the same result. Transfer to/from my Pi or other Linux was fine. Just Haiku-to-Haiku didn’t work.

Sadly the Thinkpad died shortly after, so I can say no more, but there may be something odd generally.

Yep, same problem here. The two Haiku machines can connect to each other using either FtpPositive or NetPenguin, but no files show. It was mentioned in the bug tracker a few years ago, and there’s apparently a fix, but I can’t figure it out. https://dev.haiku-os.org/ticket/10074

I’ve been able to transfer with MediaTomb (32bit), didn’t check myself at 64bit 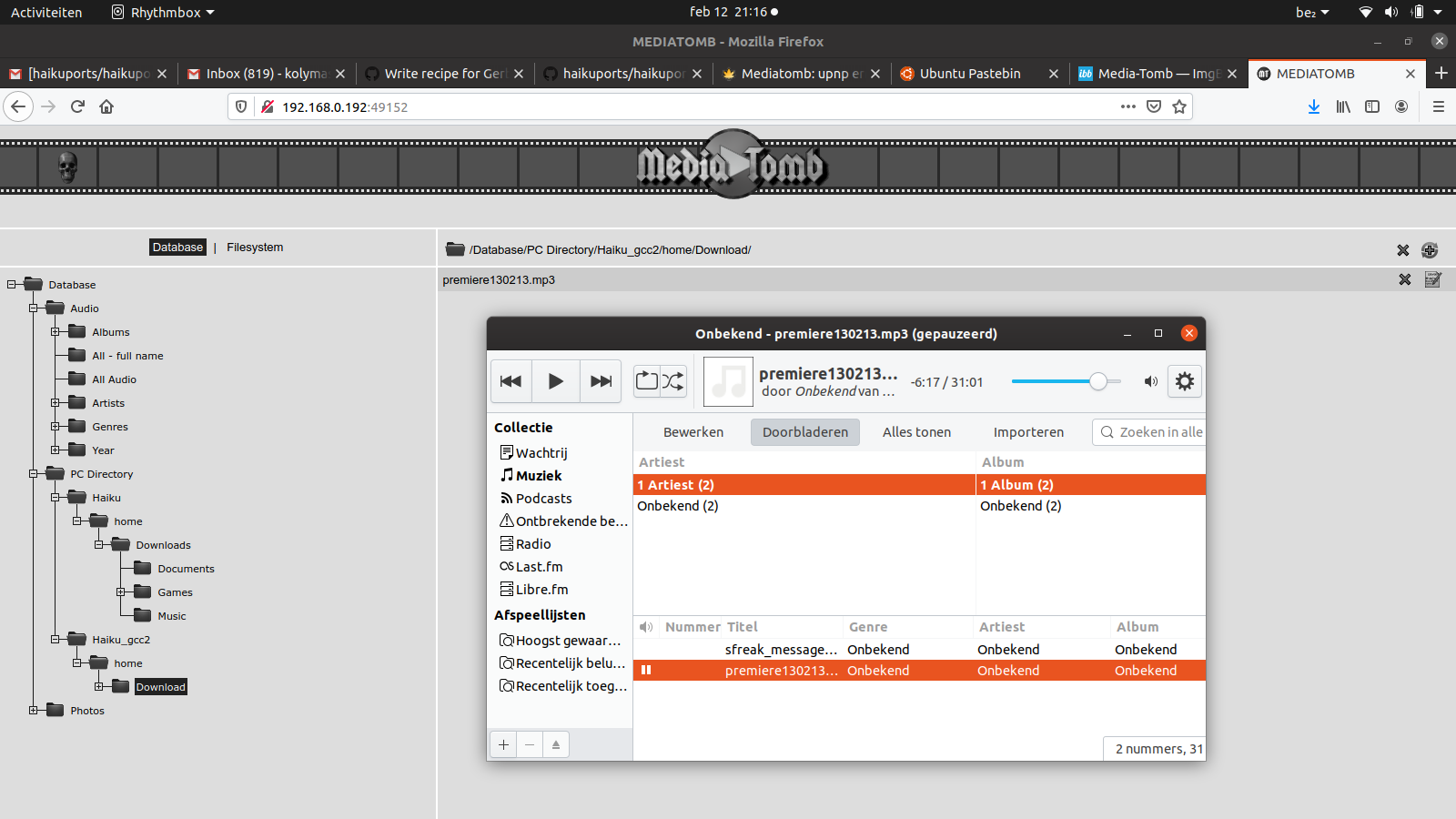 EDIT Have to correct myself, this screenshot was from a 64bit running with a mounted 32bit image from VirtualBox

Well if you still have this problem with a modern version of HAiku the bug has to be reopened, because there is no fix there, just “we replaced the FTP client and it seems to work now”.

Which version (hrev number found in AboutSystem) of Haiku are you using?

Things are becoming a little clearer. It begins to look like an FtpPositive strangeness.

Looking at that #10074 bug, he tried something I’d never thought of – FtpPositive’ing to ‘localhost’. So I tried too, on my beta 2 partition, and yep, exactly the same two-entry garbled list I was seeing when I had two machines.

I can’t find any sign of a plain FTP in beta 2, but going back to my 4-year old beta 1 system, it has one as part of the basic package. ‘ftp localhost’ works perfectly with that. But FtpPositive to the local system doesn’t! I’d of course never had a need to try that before.

I grabbed the ftp executable out of the beta `1 package, and copied it over to beta 2, and – hah! – it works just as well there too!

So it looks as if there’s no fault with FTP per se. It’s something very odd with Ftp+ itself.

Which leaves one outstanding question… where the

is basic FTP for beta 2? It was part of the basic beta 1 package, but I can’t even find it in the optional packages, nor is it in HaikuDepot. Luckily I could copy it from my old partition, but that’s not everyone’s option!

What the heck is “MediaTomb”?

Con’t see it in the depot…

Which leaves one outstanding question… where the

is basic FTP for beta 2?

‘ftp’ was removed in hrev53288 in favour of ‘tnftp’. Apparently, adding the tnftp package was overlooked. Until added, it’s available through HaikuDepot.

OK, thanks. I guess it’s HaikuDepot’s ‘Search’ that’s deficient then. I explicitly searched for “FTP” before, and only wget and wput (!) showed up. Just tried again, and nothing appears! Never got pointed to tnftp.

Weird. Works here every time. I get 28 packages when searching for “ftp”. 32bit Beta2.

Well, integrating (adopting/porting ?) this lib could be interesting…

FXP.One is a whole new system to FTP and FXP. It is not just another FTP client. It is in fact a very flexible FTP/FXP engine. This engine does all the hard work with dealing with FTP sites. Built into that is a very simple but powerful API protocol. The idea is then, if someone wants to do an FTP, or FXP, client they can then make one without the FTP hassles. Currently there already are multiple clients. They all talk to the FXP.One engine, and you can interchange the clients.