Picked up a 6500/275 since I wanted a tower system and there was one for a non-confiscatory price. It works fine in Mac OS 8.6, including audio. It has the AV inputs, but no AV out (other than the usual audio jacks).

In BeOS R5, it mostly works great. The Twin Turbo card works, the DEC 21140 NIC works, it’s nice and zippy with a 1MB L2 cache card, but … the audio doesn’t work. I even tried turning SRS surround off in MacOS to see if that was affecting anything, plugging in headphones, external speakers, nothing. It’s silent as a post in BeOS.

Just a followup, though this is still not fixed yet:

Like I say, audio works just fine in Mac OS 8.6. The only thing that makes me hopeful is when I click mute on and off in Media Preferences, I can hear a pop like the volume got initialized when I wear headphones.

Does this point to any particular issue? What should the kernel debugging output look like with working sound on a Power Mac?

Since I now have a PCI slot free, I suppose I could add a sound card, but I suspect what the x86 and PPC builds support is rather different.

You could try enabling the old Audio Server (or disabling it.)

I don’t have one of these, but the two Macs I do have both have sound (9500 with multiprocessor card and a UMAX C500 clone.)

How do I do that? Never had to before

I’ve actually been talking with him in E-mail, but he has a 5400. I wonder if the difference between Alchemy and Gazelle boards is the problem. I have a TAM also, which is the same board, but it has a L2 G3 and runs 9.2.2 and I don’t feel like breaking that all down just now to try to boot BeOS on it.

The L2 G3 should work in BeOS; but I’ve not been brave enough spend the $500 they now go for plus shipping plus customs to try. 9.2.2 is still an issue of course.

For what it’s worth, the 6500 is noted as unsupported but compatible in the official compatibility list, as are others you mentioned (5400/5500/TAM).

I’m aware, and I’m suspecting the Gazelle boards just don’t work completely with BeOS at this point. I suppose I should look at PCI card options since I’m not going to junk this after the time and money I’ve sunk into it so far.

There’s some specific handling for Gazelle cards in the Linux driver; although I knew a 5500 owner that had no issues in BeOS.

Someone running BeOS on a TAM and no audio: 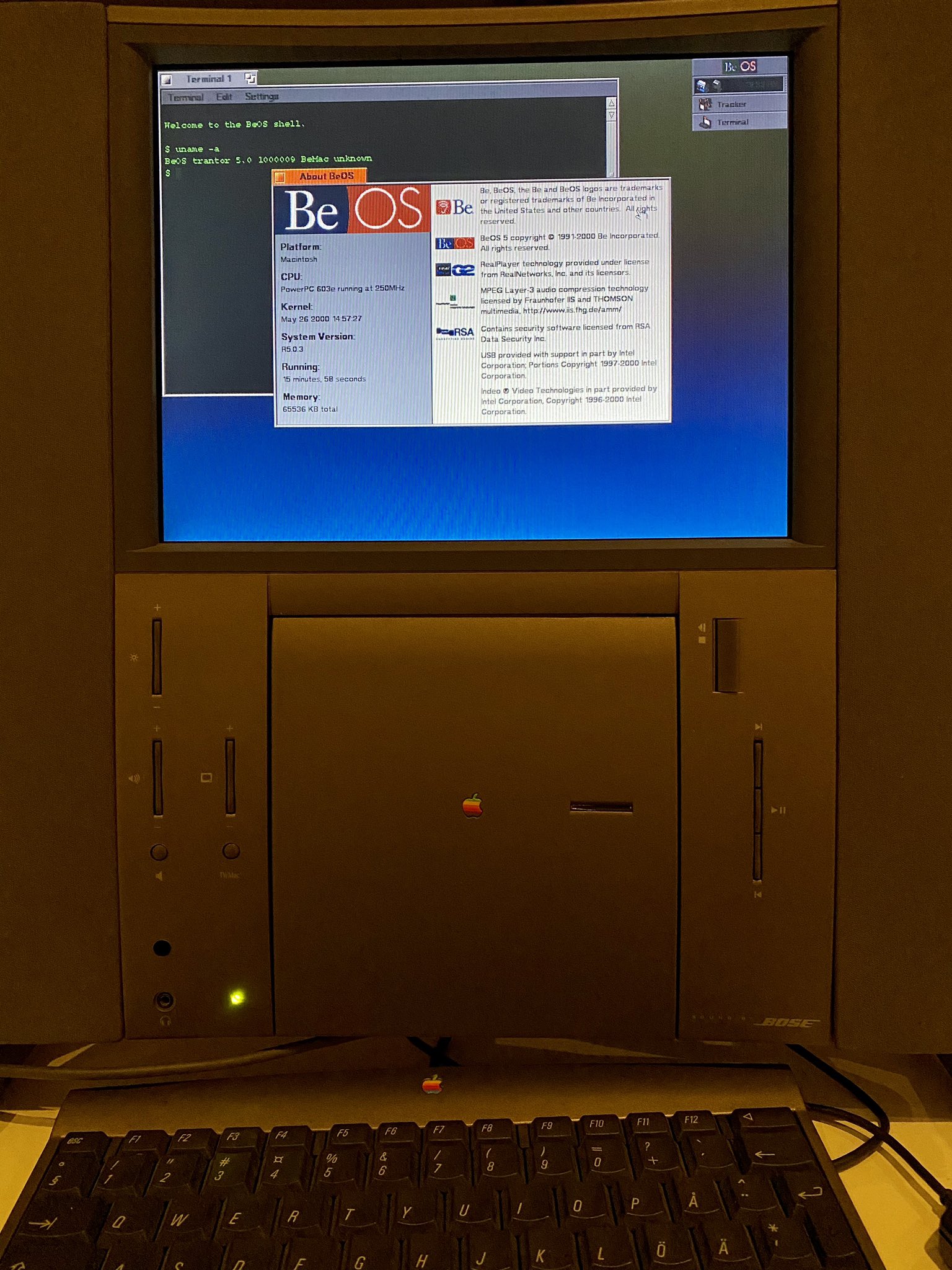 An intermediate followup. Since the sonic_vibes driver is built on PowerPC, I got an S3 Sonic Vibes PCI card and installed it, and nothing happened (it wasn’t even detected, even when I blew away the AWACS driver to ensure it wouldn’t conflict). Bringing up the kernel in debug mode showed no output.

After some thrashing around in the kernel debugger, I found the issue is that the Mac kernel doesn’t seem to support the gameport or MPU-401 (the BeBox does, so it would load there). Monkeypatching the driver to work around this – after recovering from a kernel crash on my first attempt – causes it to load PCM and mixer support, but the machine is still mute no matter what output I connect to on the card. It’s possible it never worked with anything but the BeBox.

So I guess I’ll thrash around some more with the AWACS driver and see what I can do with that.