"Open with" in Qt5 application

I am trying to get the “Open with” feature working for an application written in Qt5 (MusicBrainz Picard). When I right click a supported file and choose “Open with… > Picard” the application launches, but it does not receive the file path. Apparently in Haiku the path is not passed as an argument but by some other means.

I know basically nothing about the Haiku / BeOS API, but looking at BApplication there are two candidates I think could be used for getting the file from “Open with”: ArgvReceived and RefsReceived. Is this right? Which one? My guess goes to ArgvReceived since RefsReceived is handled by qthaikuplugin already and should do the correct thing.

Can I get the file passed to “Open with” using Qt5 somehow? Or would this need to be implemented in qthaikuplugins first by implementing ArgvReceived (if that’s actually the responsible handler)?

Does your application handle QFileOpenEvent? (Many don’t.)

I would be very surprised if it’s sent to Argv and not Refs, that would sound like a bug in Tracker or the Roster to me.

Also note that you can use the “spybmessage” utility to watch all messages sent to an application, this should allow you to see exactly what is going on.

OpenWith (and double click in Tracker) works fine for Qt5 application. It works for many text editors (Kate, KWrite, Notepadqq, etc), media players (qmmp, audacious, qmplay2) and browsers (qupzilla, otter). But it doesn’t work for pyqt5 apps, because there is no handler for the refs recieved event in python BApplication. In my opinion, the only way to implement this is to write a native launcher. Launcher will receive REFS and run python apps with command line parameters.

Thanks both of you for the clarifications. Yes, the app handles QFileOpenEvent. But I naively assumed having this even handling in qthaikuplugin would make this also available to PyQt based apps.

But implementing a small warapper BApplication sounds like a good plan to handle that. I think it also resolves some other issues (e.g. better setting of resources for the file), having a Python script as the main launcher for a Haiku app does not seem to be ideal. In the end this would be similar to how launching the app already works on Windows or macOS.

I will look into this, it also gives me some possibility to learn a bit abut the native Haiku API

But it doesn’t work for pyqt5 apps, because there is no handler for the refs recieved event in python BApplication.

Where exactly is this BApplication instance created then? And doesn’t this also cause other issues? E.g. in qhaikuintegration_haiku.cpp the haiku integration connects to the applicationQuit signal, but that’s only provided by the custom HQApplication implementation.

I started looking more deeply into this issue. In general there is actually not much special about PyQt app and I probably misunderstood your previous comment. The BApplication is just created as expected by the qthaikuplugins and in general the event handling also works.

With the first two issues fixed dropping supported files on the deskbar icon works as expected and the application receives the QFileOpenEvent. But there is

I tested with audacious and clementine, it doesn’t work there at all

Not even with my patched qthaikuplugins. Even the drop on deskbar icon action doesn’t work (even though the icon indicates a drop target).

“Open” or “Open with” from tracker still has no effect. It does not even call BApplication::RefsReceived . So far all my debugging was unsuccessful.

Did spybmessage help at all? 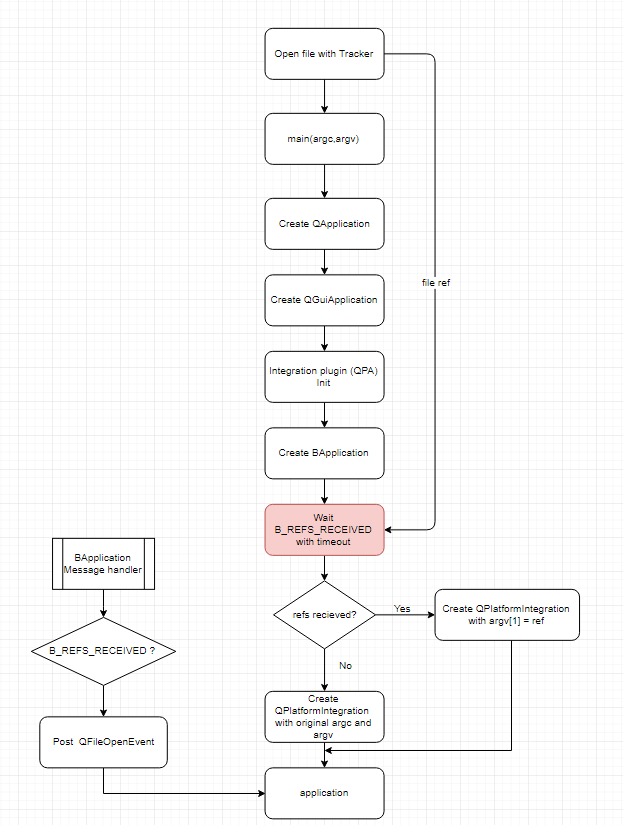 The problem block is highlighted in red.
Many applications do not use QFileOpenEvent for open files, but use command line argv[] parameters.

Did spybmessage help at all?

It helped me understand the messages on other applications. But for debugging my PyQt app I ended up patching qthaikuplugins to write debug output to a file.

Thanks. Turns out Audacious is actually working fine now after a fresh boot, not sure what was happening. Same is true for my PyQt5 app, open with works, but only with the patch from https://github.com/threedeyes/qthaikuplugins/pull/14 applied.

Can you take a look at the patch? I’m probably missing something here, but I see no reason why it should block the very first B_REF_RECEIVED message or do the obscure dance at https://github.com/threedeyes/qthaikuplugins/blob/master/platforms/qhaikuplatform/haiku/qhaikuintegration_haiku.cpp#L177 . Bu it’s your code

Can you take a look at the patch? I’m probably missing something here, but I see no reason why it should block the very first B_REF_RECEIVED message or do the obscure dance at

I test it and i have a problem. Without prevention first B_REF_RECEIVED i have twice opening files. KWrite for example. Open any text file with KWrite and this file will be opened twice.

I test it and i have a problem. Without prevention first B_REF_RECEIVED i have twice opening files. KWrite for example. Open any text file with KWrite and this file will be opened twice.

Ok, I now see how this is working out. So the existing code tries to turn the first ref send to the application into a command line argument by waiting for the first ref to arrive, suppressing the event for it and copying it over to argv.

I think we should remove this workaround, IMHO it causes more trouble then it solves:

I think the proper way would be to remove this workaround and instead see to patch affected applications for FileOpen support. I have updated my pull request to remove the workaround completely.

If you think we should still keep it I would suggest making it opt-in instead. E.g. we could set an attribute (e.g. QT:REF_TO_ARGV) on the executable and only apply the workaround if this attribute is set. Or if you really want to have it default, at least have a way to opt-out of this behavior. What do you think?

¹ I previously reported Audacious would be working, but that was not true. I fooled myself because Audacious as a player remembers the files already opened. Actually Audacious does not work with the current approach, as it parses argv to early, and also not with the patched version, as it does not handle FileOpen. Proper thing would be to patch Audacious for FileOpen support.

Patching/requesting other Qt5 apps support that event sounds good to me, yes. We like deep, systemic solutions around here instead of work-arounds

Patching/requesting other Qt5 apps support that event sounds good to me, yes.

For starters I will see if I can look into providing a patch for Audacious next week. This is a kind of change projects might also accept upstream, especially if they have some ambition to also support macOS.

I think will be problematic to add QFileOpenEvent support to all these applications. We need a simple solution imho.

I think will be problematic to add QFileOpenEvent support to all these applications. We need a simple solution imho.

I would like to see a simple solution, but the current hack unfortunately isn’t one

It has numerous issues:

To emphasize the last point, what this code basically does is something like this:

This is not a safe thing to do, it writes outside of the space allocated for argv. In practice this will actually overwrite the first environment variable, which are placed in memory behind argv. But this is an implementation detail. And it is even unpredictable. When I ran this it overwrote LC_MONETARY variable on my system. Could be anything else, could be something different next time something changes. Could crash the app or cause any kind of unwanted side effect. Who knows.

I know that my workaround is bad solution, but I don’t see how it can be implemented.
The only thing that comes to my mind is a separate launcher for applications. But this is also a bad solution.

Perhaps as a temporary solution (until we come up with a better one) I will implement a solution with an extended attribute in a binary file. The workaround will be disabled by default. If you add an attribute (QT: REF_TO_ARGV as you suggested) it will intercept all refs, form a new ARGV array, and not replace elements in an existing array)

How will it be passed on reliable to the application?

Another thought I had, but this goes a bit outside of the scope here, is whether Haiku itself could implement some launch flag for this. If that flag is set Tracker would pass the file paths as arguments instead of sending ref messages. This would allow applications without the messaging support to work with the Tracker open feature.

I originally expected B_ARGV_ONLY to trigger something like this, but this only suppresses the messages? Not sure what it does really

@waddlesplash Do you think this is this something that could be considered?

From BeBook: B_ARGV_ONLY: The application can’t receive messages. Information can be passed to it at launch only, in an array of argument strings (as on the command line).