Regarding @haikunauts (on Twitter) and haikunauts.home.blog (wordpress site), maybe I should have written this long ago, so a bit late, here it comes.

Take this with some teaspoons of humor and happiness

Everything that surrounds Haiku, including but not limited to, the hardware Haiku runs onto, the peripherals that can be used with Haiku, software designed for Haiku, ported software, people who use Haiku, dressing of Haiku with themes, icons, wallpapers… reviews, be them written or video, scattered everywhere… websites dedicated to Haiku…

Reading through the forums it can be seen that a great number of people around here have some sort of tech background or, at least, aren’t scared of digging in here and there to get things working. While “regular” is some term that is subject to discussion, I’ll say here that regular, as non tech aware/ non tech savy/ tech indiference, users want to see/find things easily, in an easy to understand language in order to end up doing things, also in an easy way. I might be mistaken with what I just have written, and while generalize is never a proper approach, my personal experience has more of these than tech freak cases.

Because of that, I thought of gathering tips that could be useful for regular users that come to Haiku as first time users, in order to ease in the process of using Haiku. By no means is evangelism in the sense of trying to get people to use Haiku saying things like “Haiku is the best OS” or whatever. The idea behind is to offer the info, and let users decide by themselves without pushing people around, trusting their common sense, if they find Haiku useful for them, welcome, if they don’t, thanks for dropping by.

Both the twitter account and the website try to be Honest about Haiku, acknowledging that Haiku has plenty of flaws, but not being ashamed of them. Flaws are chances for improvement, as I see them, and while some might get in the way, in many cases there are shortcuts to circumvent them that regular users might not know. Certainly some of said stuff might be part of the default Haiku User Guide, some might not. But, then again, who RTFM? nowadays?

Also, tried to write down those things in a simple, easy to understand, language (others should evaluate if this has been achieved), so anyone, regardless their age or knowledge could understand what is shown without brain damage

I’ve been told that if you write things in a way that a 6 year old kid can understand, anyone could understand it. (experience proved that wrong in certain cases

, but in general turns true)

Twitter account is used basically to post new stuff that comes up on the forum, new software availability, releases, reviews, hardware support… whatever that has anything to do with Haiku, though sometimes hashtag #haiku ends up in groups of people who write Haiku Poems…

I’d like to point up that the content found on the website as well as the tweets all try to blend respect, politeness, happiness, humor and simplicity, while being objective though sometimes might be a bit biased towards Haiku

The Haikunauts characters are designed loosely “following” the icon guidelines to have a sense of a whole thing with the official site, without trying to draw attention away from it. While far for complete, these Haikunauts try to represent anyone (there is a lot of WIP on that matter yet to be released), or that anyone can see themselves as a “potential” Haiku user? Way too overweening?

The website uses the colors of the default Haiku theme, yellow, blue and grey, trying to get a sense of familiarity with the desktop the users are going to find when they launch Haiku for the first time. And tweaking the looks of an OS is something that new users don’t usually do, until they get a grasp on how things work on the “new home”. Usually people is afraid of changes, and having a similar color themed environment might help to lower the entry barrier and make them feel more comfortable.

It’s clear that the site is far from complete, and that the twitter account could be posting more stuff, still, as with many people here, free time is limited, reducing the posting rate.

Actually, I just discovered recently that a single twitter account can be managed by several users. Same for the wordpress site. So that is when I posted on the Haiku Promotions Twitter Account? topic about it and well, it could help improve the experience, and increase the valuable content.

Using the parallelism with the universe just seemed straightforward, Haikuverse/Universe, Haikunaut/Astronaut. Also tested with Космос and 太空, but these two didn’t seem to be as suitable for the purpose. And it seemed as a nice choice for marketing purposes without interfering with the official accounts, that was never the point. This was created as a complement, same as there are other websites/twitters (macuarium, windowscentral, thisweekingodot, blenderdev… ) that are also ‘sidekicks’.

If you have any questions, feel free to ask. I might have left something floating around.

why a new page for tips and assistance if there is already a knowledge base?

I don’t want to stop your creativity or prevent what you’re doing, but we’ve been writing and collecting instructions and assistance for haiku for years.

The graphics on the WordPress site look fun! If it is designed for a younger audience, it could complement other sites in the Haikuverse, rather than replacing them.

By your definition, I am not a haikunaut yet. I consider Haiku to be an up-and-coming independently-developed operating system. It looks more promising than AmigaOS because its multithreaded kernel. With some healthy graphics acceleration it would be an outright winner but that appears to be the hardest part to add.

I’ve tried out Paladin and Koder and with the stack and tile features of the GUI, it seems to be really slick as a development platform. It still needs some sort of intellisense like Visual Studio Code has but leveraging the smartly-designed GUI has gotten farther than other platforms at least.

Maybe I’ll become a Haikunaut yet!

Hey @haikunauts, just noticed that your site lists Beta3’s release date as March 2021 - Beta3 will release sometime in late July (the date is not fixed), so it’d be really appreciated if you could correct that! Thanks!

Thanks for your efforts in making more people explore the Haikuverse!

We really appreciate the work you’re doing. As for the Twitter account and potentially sharing it with the marketing team, plus maybe expanding the blog a bit, I can totally get behind that. First though I want to settle our discussion on the official Twitter account, as once that’s complete we can figure out how we can blend our efforts.

@lelldorin, so it is stated in the haikunauts.home.blog, (From BeOS to Haiku) and has been there all the time since the beginning of the site 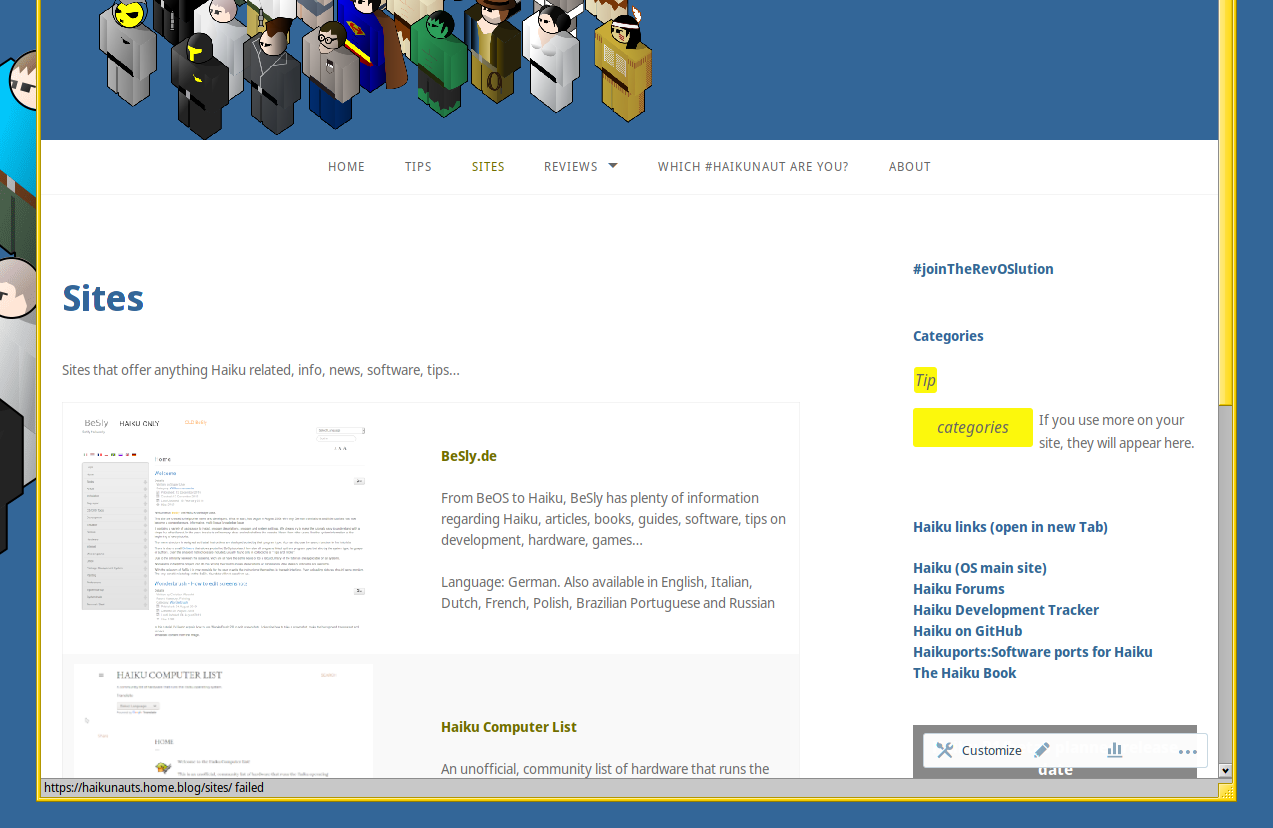 @SamuraiCrow, you are never too old to be a ‘padawan’, this is not Star Wars

It’s supposed to be fun, and for the kids… inside ourselves… or…

Isn’t it true that one grows old the moment stops playing like kids?

@jt15s, after the release of Beta 2, the Haiku Roadmap page had it written March 27th as the release date, if I remember it right. So now that date is long overdue. Just recently read about the new expected release date. It’s already added.

@PulkoMandy, no need to thank. Glad to help.

I got more planned after beta3 comes out, like a redo of the list, redo of the retro reviews, and finally finishing Isometric Leaves so totally looking forward to being worth the mention

I have no problems with mobile using besly. The old.besly.de are bad to use but the besly.de are created for mobile and other bowsers.

thanks for putting in effort to spread the good gospel of Haiku:)
Reminds me of the wonderfully weird indie game “Psychonauts”, somehow fitting for all the positive eccentricism and general geekiness among us:)