I’ve been playing around with the fantastic synth SyncModular and got myself a nice little MIDI controller (Akai MPK miniII) since I had a birthday recently.

It’s only a 25 keys controller and I’m not a musician at all (just learning a few cords, painfully…), but nonetheless, I’d like to ‘record’ and edit my masterpieces. I understand that I need sequencer software for that, right?

Unfortunately, MeV apparently doesn’t feature midi input.
Sequitur, as it’s currently available, doesn’t seem to provide any of the tools to set/edit notes (icons are missing). I also didn’t manage to see my MIDI input anywhere. PatchBay doesn’t show Sequitur either. Could be a user error, of course. Sequencers seem to be quite complex and confusing apps…

Is anyone using any MIDI software under Haiku (for MIDI input, of course)?

As I have no experience with music software, can I control sample files (WAV etc.) with my MIDI-in with a sequencer app normally? Under Haiku as well?

Hmm… I use Sequitur quite a lot – and reasonably successfully

. One of the main things I do in Haiku is MIDI! In fact I’ve been playing with it all morning… (Trying to write an emulator for the Novachord

)
I think the Sequitur available on the depot is the one I fixed up for Haiku, but I’ll go check. [And yes… Sequencers are in general hideously complicated beasts!]

Mnyehh… Looks like a) the version on HaikuDepot thinks it wants a brand new hrev, so I can’t look at it directly, and b) I did my updating pre-PM, and that version doesn’t run in PM. However they are both 2.1.2 (I bumped that rev), so they should behave the same.

With the version I have, I can record MIDI, and can edit the resulting tracks. What seems to be missing?

As to playing things like WAVs with MIDI, it can be done, but not with a sequencer (with Sequitur anyway). I use software called ‘Csound’, but again I ported it pre-PM. I have it working in my PM partition, but it’s a pain to set up; I haven’t got round to making an hpkg yet, as there’s some effort involved there, too. FTR, Csound has been around for decades, based on work by the pioneer Max Mathews, but is still being actively developed. [And I can’t keep up… The main repository is now at 6.07, and Haiku is still stuck with 5.19. I’m not too bothered, as 5 has enough twiddles to keep me busy for years.

And for generally playing with MIDI, I of course recommend the MusicWeaver…

(Not available as an hpkg yet, but it runs fine in PM. Only available from my site, I guess. http://goodeveca.net/beos/musicweaver.html

If you can explain your problems in more detail, I’ll be glad to try to help.

Heh… Dunno who packaged the current 2.1.2-5, but it is indeed missing a lot of essential stuff!! (I downloaded the 2.1.2-5 hpkg direrctly from repository and unpacked it manually. Works fine on my earlier system of course… One of my beefs with package management!)

Anyway, a number of essential folders are missing, and therefore you’re right – so are the icons!

I’m not sure what the best course is. On the HaikuPorts site, all the versions of Sequitur seem to have the same (lack of) content. I made the original package, and it has everything, but it uses the original build of 2.1.2 – which no longer runs on current systems! It looks as a quick check, though, that restoring the missing stuff from that earlier package is perfectly compatible (they’re not executable files), so one can merge the two.

I guess the only place to get the missing stuff is again from my site: http://goodeveca.net/Sequitur/ or the zip version is on BeShare. You’d have to unpack the current hpkg in some writeable location to get the working executable and merge in the missing bits. As long as everything is in the overall Sequitur folder, the app will run anywhere, so it doesn’t have to be “installed”.

OK… I’m going to rant here! I really wish that whoever packaged Sequitur on HaikuPorts had contacted me first, to find out how it actually works!!! Things were switched around in such a way that nothing works! No Tools, no Devices,… NO DOCUMENTATION FROM the APP’s MENU! [OK – looking at the packageinfo I see it was actually you Humdinger, but I think my rant still stands…

(There is a nice little gotcha with PM. The documentation for the Filters and Tools is “auto-documented” (from the relevant files themselves) and is supposed to be written into the app Documentation folder. Not possible on a read-only system… Not too important if things stay as downloaded.)

I’m currently trying to straighten things out, and create an up-to-date hpkg that actually works. I’ll let you know.

there are a lot of points you bring up. I may come back to them later…

Just quickly, concerning CSound and possibly your MusicWeaver: Currently I’m looking for really just a layman’s GUI app to play around and record sounds and little tunes. I’m not trying to program music. :slight_smile
It looks like for my shallow needs, Sequitur is the only(?) choice. Maybe LMMS as well. Let’s talk about that later, after we’ve fixed the Sequitur package.

[quote=“Pete, post:4, topic:4304”]
OK… I’m going to rant here! I really wish that whoever packaged Sequitur on HaikuPorts had contacted me first, to find out how it actually works!!! Things were switched around in such a way that nothing works! No Tools, no Devices,… NO DOCUMENTATION FROM the APP’s MENU! [OK – looking at the packageinfo I see it was actually you Humdinger, but I think my rant still stands…

Well, the original recipe was from someone else, I just stripped unneeded resources a while back, and recently pointed the source download to the latest commit in the Sequitur repo, because the old code didn’t build anymore, and the old Sequitur refused to launch (some runtime_loader symbols error).

It would be nice if you could either fix the haikuports recipe, or document how you build Sequitur. Going into the “Sequitur” folder and doing a simple “make” or “make release” as it’s written in the readme doesn’t seem to cut it. There are no “tools” to copy etc.

Quick reply, as I intended to head for bed half an hour ago…

I think I have built a fully working hpkg. I uploaded it to my site, but haven’t had a chance to reference it in the html yet. [And I can’t seem to type in the URL correctly, so please wait 'til tomorrow!]

I’ll have a better chat later!

An alternative to using a sequencer is to use a tracker (no, not the file browsing one). Jua did a great work in porting MilkyTracker, and looking at the sources, I see there is some MIDI input there. However, I don’t see any MIDI output, so plugging it into SynC Modular isn’t possible. You will have to work with the built-in sample based system.

It would be nice to have such a tracker with MIDI out support as well, still.

[quote=“PulkoMandy, post:7, topic:4304”]
An alternative to using a sequencer is to use a tracker[/quote]

I know trackers from way back on the Amiga. I never really could warm to their usage…
From a quick look at MilkyTracker, besides the expected trackerish usage, being confined in a tiny camped window is a big turn off to me.

Thanks for the suggestion though.

Tiny window? You can configure it to be a lot bigger. 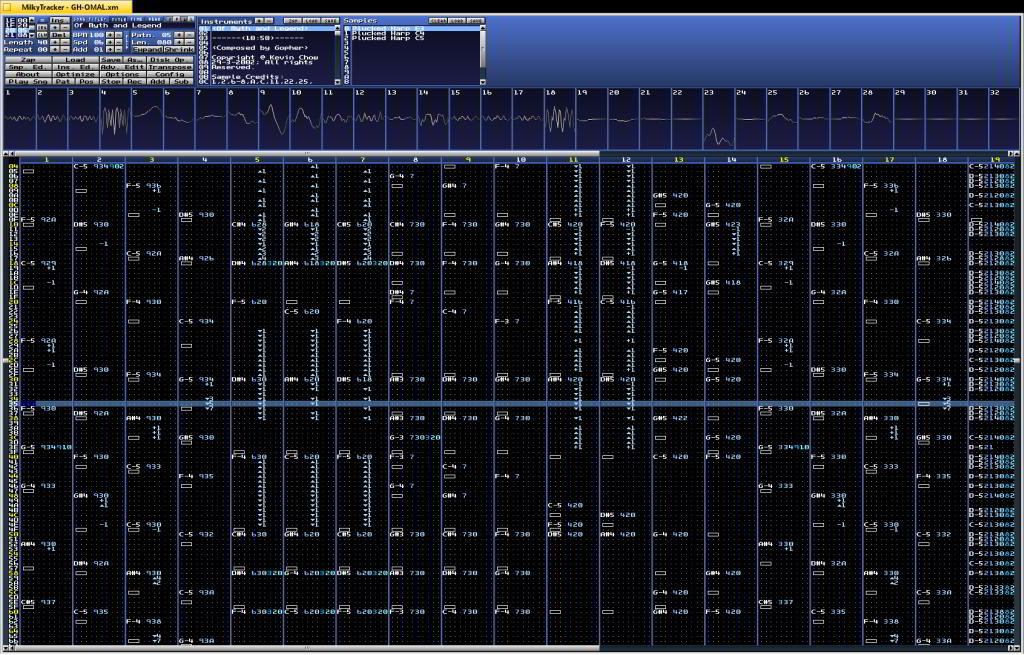 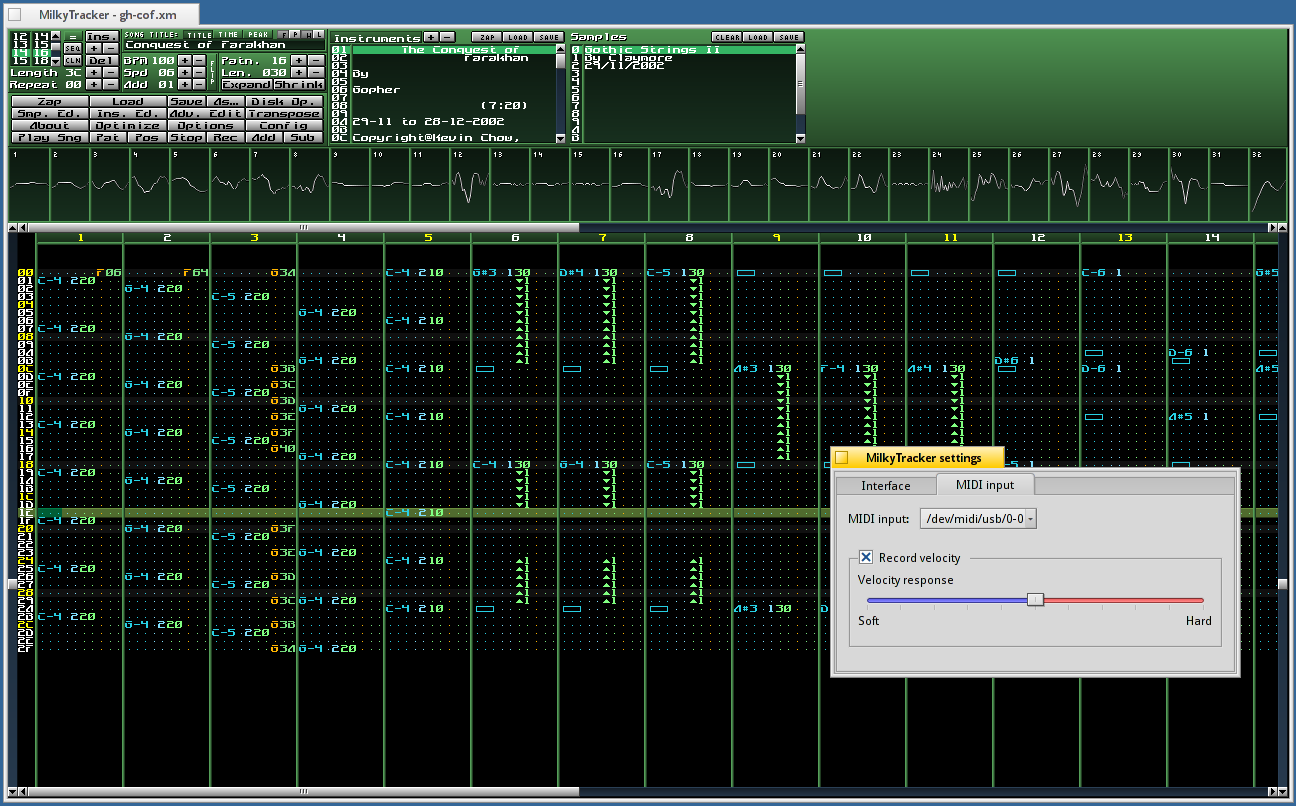 I still seem to be rather rushed at ther moment, so again this will be brief. I have a seems-to-be-working hpkg at http://goodeveca.net/Sequitur/sequitur-2.1.2-6-x86_gcc2.hpkg

For some reason it isn’t finding the Haiku synth in my test partition – in fact I don’t have any audio at all, so something’s wrong. It’s not a clean partition though, and it’s hung me up with conflicts before, so I’m not blaming the OS at the moment. I’ll dig more later. Meanwhile if anyone runs the fixed version, you should expect to see two “Be MIDI Synth” initial tracks. If you don’t, please let me know.

BTW, one bit of advice: if you ever ran the non-working version, you should go into ~/config/settings/AngryRedPlanet and delete the Sequitur folder, as it will have bad settings that persist. Sequitur will create a new one with the correct defaults on startup.

I’ll come back to your other concerns, Humdinger, later.

Update: I’ve fixed my test-partition problems. It was something left-over interfering with the latest installation. No idea what, but I zipped up all the old stuff lying around and deleted the folders. Now I have both audio and midi.

I have also found that the master source I supplied pre-PM does in fact no longer compile in PM. No clue, but investigating…

I’m curious what exactly you do when building so we can repair the recipe. BTW, I have created a vector icon for Sequitur, but have difficulties spotting where in the buildsystem to replace the Sequitur.rsrc with the new Sequitur.rdef, see isuue #7.
Maybe you have an idea for that as well, otherwise we’ll have to compile rdef -> rsrc and replace the old one.

Just thought I’d mention that, with some Herculean efforts from Humdinger, a fully working PM-friendly version of Sequitur is now available on HaikuDepot.

Well… the effort wasn’t exactly the heroism of ancient Greek myth. And I did have your untiring help, of course. So, well done us!

Thanks to both of you and everyone involved! Sequitur is a great app and it will find some uses here

Currently LMMS is ported to Haiku but I do not know how to connect MIDI input as with Sequitur. Is the MIDI input for this program implemented?

Hey folks, I checked out the first Beta and I m in love with haiku

I m looking for a tracker with focus on midi and stumbled upon this (not yet ported) app http://www.nongnu.org/tutka/ . It seems like it uses qt and is written in c++. Maybe someone knows how hard this is to port.

Any hope of getting a music score editor like MuseScore, RoseGarden, Canorus or Finale working on Haiku?

Musescore is available for 32bit Haiku. No idea how well it works though.

I’m trying Musescore from the pkgman repo. It’s the latest version (3.6.2), which is cool. However, it seems to be only able to display partitions, and not to play them. The play button is greyed and the “synth” option (which is used to set the soundfont) as well.

In the advanced options there is a io/portMidi/outputDevice option, into which I’ve put /dev/midi/usb/0-0 (this usb-midi device is working with sequitur). But nothing more. I suppose portMidi is not working with haiku and therefore MuseScore was compiled without this option. (I’ve also tried to compile portMidi for another project, it requires Alsa and Java)