A default Haiku install currently uses English text for both Applications and Preference panes, to enable localised names, it should be turned on manually.

However, it can be argued that providing English strings for applications and preference panes would not be ideal for some users, since it requires English knowledge to navigate around Preferences and eventually find this setting.

Another argument is that Preference panes should definitely be translated, since they are tied into the system directly, but Applications should be optional. Maybe some applications which can be regarded as essential utilities, like ActivityMonitor and Expander can be included in this category as well.

What do you think? Please let everyone know with the poll below!

… should be translated to the choosen language in Installer.
Maybe I did not understand your question right! Sorry.

@brunobastardi, no, you got it right.

Voted for ‘both’ in the list, but I also think the ‘first boot prompt’ comes really close to the idea in Setup Assistant from the Mac where one can choose a keyboard and locale out of the box, but (at least to me) for it to really be useful to everyone around the world, the first boot options really should be listed like: “I speak English”, “Yo hablo Español”, “Je parle Français”, and so on, so the user can select the right language (with a matching popular key layout) by sight. The Installer in Mac OS X (and more recently, macOS) does something similar to this; example below (shown as a scaled down screenshot under Fair Use): 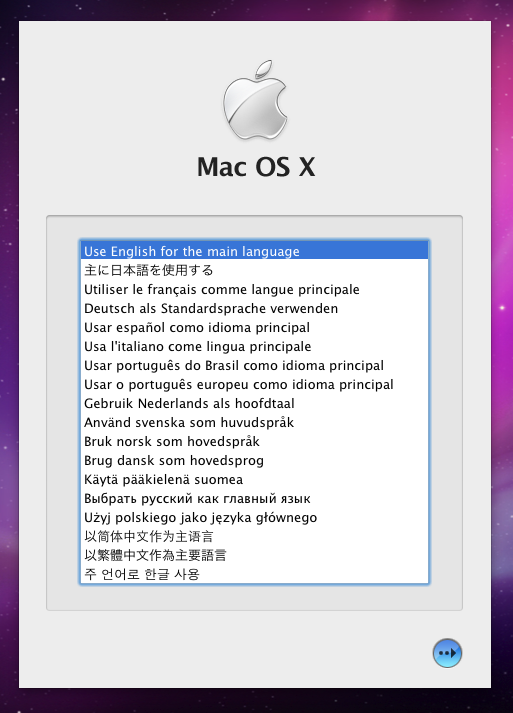 Additional ideas (for R2, most likely) would be to also put in a speech synthesis part to it too where Haiku cycles between the entries in the list after a delay and the user can press return (or enter). But that’s just me

The real question is:
a) do we need more fine grained settings in the Locale app to toggle those three areas individually?
b) which of these settings should be “on” by default?

If a) were implemented, it wouldn’t depend on each language’s translation team’s decision what to translate. They’d just translate all (however awkward they now think that is…) and the user can decide what area they’d like to see translated names for (apps/prefs/folders).

(IMO folder name translation makes the least sense. It clashes in Terminal, in some apps, and only a handful of folders are even translatable.)

There should be two separate settings, one for applications, one for folders.

Preferences should be translated at all times, it’s a core system part. For the applications, we can flag application name strings in Pootle for translators to consider translating if it only makes sense.

There were some discussions about this in the past, the arguments I remember are:

Also, by asking the questions in english here, the results are biased towards not translating. But it looks that doesn’t matter much.

I would still run such a poll in each language community to see what they think.

For directory names and applications, there is the problem of Terminal which won’t handle translated names, unfortunately.

Having both names used in the system results in much confusion. So if that’s the only option I would prefer that we don’t translate them.

Translating folder names is useful for the non-English speaking folk to familiarise themselves with the internals (in Tracker), and User Guide covers the translated folder names as well.

For Terminal it makes no harm to leave them in English. We can assume that if someone is proficient enough to use Terminal, they’d probably know the English counterparts (it’s always a ls away).

I’d prefer we wouldn’t have any settings for this at all, but if we want to give users a choice, well, okay then.

As italian translation team lead (well, the unique team member actually :D) and following what I’ve seen in other languages on Pottle, in the past I’ve chosen to not translate. But I can admit that I’ve mostly changed in mind. Haiku is targeted to personal computing, so user experience is imperative, here.

These should be translated IMHO

Although we’ve a problem here. In BeOS fashion, Haiku apps have a personal touch. If you’re going to translate an app name, it is to make its function clear to a wider, non-english speaking, audience. But we have names like People, CodyCam and PoorMan. These won’t be more clear when translated.

And if you’re arguing that most of them are (like CharacterMap, Magnify and so on), I would answer that the translation strategy should be consistent.

Let Alone that even those that seems to be obvious have proper name, too. Ie., it is “CharacterMap” and not “Character Map”. For example, the latter in Italian is “Mappa Caratteri”. It is a functional name, while “MappaCaratteri” is a proper and definitively a non-alliterative one, instead. Too bad.

Yes, there will be ambiguity when going Terminal. But who does? Hardcore users. These users won’t be surprised or puzzled to see that ambiguity in names anyway. This is exactly what happens in OSX, for example.

Yes, the typical Haiku user is going Terminal all the time, today. But that’s because the community is made of developers and enthusiasts. Not the typical user the OS is targeted to be (personal computing etc. etc.)

Conclusions: to have a slighty personal user experience you must translate in local language. But to do so you must be consistent.

(let alone the accessability topic about the non-english spearkers which is mandatory, but it was already discussed above in the topic)

macOS does this distinction between the translated/non-translated apps beautifully. There is a separate Utilities folder, and all the apps there are translated (except the words Boot Camp and ColorSync).

Remaining apps are mostly translated, except App Store, Mail, and TextEdit. So in my case I translated following apps:

All above apps could be argued that they should be concise, and their purpose should be understandable. Most of them carry a “utility” value.

But for instance, PoorMan, Pe, CodyCam etc., there is no harm if they stay the same. That’s why reminding translators about this as application name string comes up on Pootle is important. @humdinger, can we do such a thing?

macOS does this distinction between the translated/non-translated apps beautifully. There is a separate Utilities folder, and all the apps there are translated (except the words Boot Camp and ColorSync).

This could be a way. I mean, not to have a separate Utility folder but:

I won’t say I love it, but it could be a way to be more consistent BUT…

…as the above example suggests, we’re going to lose the personal touch of Haiku, here. I’m not saying it’s necessarly wrong on its own, but it’s a fact.

Anyway, without translating folders names, translating jsut apps name is a nonsense to me

…as the above example suggests, we’re going to lose the personal touch of Haiku, here. I’m not saying it’s necessarly wrong on its own, but it’s a fact.

I see what you mean, but I’d definitely prefer users to find out easily what that application is about.

Anyway, without translating folders names, translating jsut apps name is a nonsense to me

Which reminds me of the fact that we have four untranslated menu entries on the main operating system menu.

What is being overlooked here is that we’re talking about individual terms/names/words and not full sentences or pieces of text. The problems that come with understanding sentences or pieces of text are mistaken here as problems that come with understanding individual terms/names/words.
Imagine you’re a tourist that visits another country that uses a language you don’t know. Within a few days you’ll know a set of local words for things like ‘taxi’, ‘train station’, ‘restaurant’ etc., even without help of a local or a tourist guide. It’s as simple as that, really.

I don’t think the point is that it is hard. The point is that you cannot force a user to learn even a few words in a foreign language while using an operating system. The Haiku user is not a tourist in a foreign country. And more than that Haiku is technically targeted to the average user.

Yes, there will be ambiguity when going Terminal. But who does? Hardcore users. These users won’t be surprised or puzzled to see that ambiguity in names anyway.

Well, I think I qualify as poweruser, and I’m annoyed by this. Having two names that points to the same thing confuses me. Even more so if I end up having both a “Downloads” folder and a “Téléchargements” one, with “Downloads” showing as “Téléchargements” in the user interface. This is, in a way, solved in Haiku, as we don’t really privide that kind of folders.

I think we should keep “/boot/home” as home, and “/boot/home/config” as config. No translation here. For the DeskBar menus the matter is different, but, these are not really folders, anyway. I think these should be translated.

For preferences, yes, it makes sense to translate.

For apps, it’s more complicated (for the reasons mentionned above, the apps have a “personality” which translators may want to preserve). And this is where I think we really need a locale-dependant default. Depending on the expected familiarity with English, translating may make sense, or not. And we probably also want larger icons so even with unfamiliar names, you can still figure things out easily. No solution is going to be perfect here, anyway.

No giant icons, please. 16x16 and 32x32 icons should be available. I hate that in new Windows versions 32x32 icons can’t be selected.

Storing localized infos in attributes was not done because it doesn’t work well when you switch to different languages (ok, this may not be a too common use case). But we have a working solution for that already: we can use locale catalogs to translate things, that’s not a problem. And yes, when doing it this way, nothing on the filesystem is actually localized, it’s just Tracker and DeskBar hiding the real name of things. Note that this will cause problems to apps not using native interface. How will Qt know to show localized names? What about ncurses, should it localize, or not?

No giant icons, please. 16x16 and 32x32 icons should be available. I hate that in new Windows versions 32x32 icons can’t be selected.

It would be done in a way that does not waste space. Maybe 24x24 icons is enough, and we could arange them in a better way (not a boring vertical menu) to improve density. This of course needs some experimenting and careful consideration, but I don’t think Haiku is known for wasting screen space

Note that this will cause problems to apps not using native interface. How will Qt know to show localized names? What about ncurses, should it localize, or not?

Qt should use native file open dialog. Terminal based utilities are not to be used by regular users, only power users and developers, so name localization is not needed.