I downloaded Haiku and installed in a VirtualBox VM. After installation, I opened SoftwareUpdater and installed all of the available updates, and then rebooted. Now, anything I try to do that uses pkgman crashes (pkgman update, running SoftwareUpdater or HaikuDepot). If I click “Debug” on the crash dialog, the debugger fails to load the debug info for several libraries, but at the end of that it looks like the stack trace dies somewhere in libssl.so. How do I fix this? 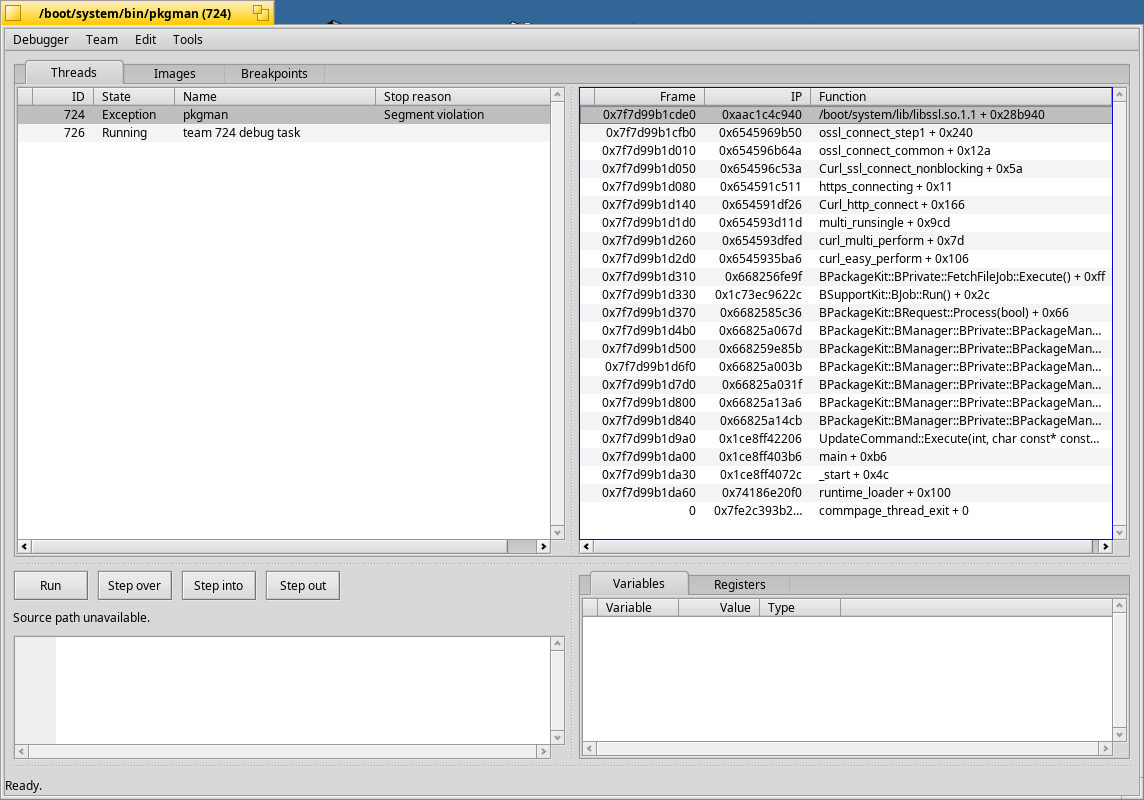 Album of all error messages: https://imgur.com/a/toedW82

Please report issues in the bug tracker, not the forum. There is a ticket for this already, now: https://dev.haiku-os.org/ticket/15837

The problem was caused by an OpenSSL update, which apparently is incompatible with beta1 somehow, which is odd. I guess we may have to backport some fixes.

I guess we may have to backport some fixes.

Can we instead release a beta2, please?

Well, I guess the existing regressions (EFI) can probably just revert the offending commits, so maybe?

I really would like to fix the NVMe disk corruption – I’m becoming more and more convinced that the disk cache is actually to blame, so I’m trying to get the bug to reproduce on a ram_disk.

I really would like to fix the NVMe disk corruption – I’m becoming more and more convinced that the disk cache is actually to blame, so I’m trying to get the bug to reproduce on a ram_disk.

We are already 6 month late on the scheduled date (a year after beta1 was the initial goal, that would have been October). So, we should try to ship it as soon as we can. All the fixes are nice, but they could just as well go in beta3 or be backported to the beta2 branch.

How do we fix a R1B1 system that will not update with pkgman?

You can revert to a previous state via the bootloader (or by swapping packages in a state file out, but if pkgman will not even start, that will be trickier).

That may be but what if there is no previous state available? What is the best solution? Is there a way to insert previous hpkg’s from Haiku repositories into a system?

If it’s only ssl you could check https://depot.haiku-os.org/#!/pkg/openssl?bcguid=bc235-HBMM for instance (for previous versions)

IIRC previous versions links used to work at some point but now they just 404.

is there some sort of workaround for this? it’s getting a bit annoying having to manually download apps

Maybe you can download Haiku image, mount it and get packages from there.

yeah, i managed to do that, but it turns out my issue is a bit different.

When I try to install something with pkgman or HaikuDepot, it crashes. The debug log says some stuff about a Segmen violation.
here’s the logs for pkgman https://gist.github.com/benclarkk/cf98f2b085f05fb4e6506dbcb9792921
and the logs for haikudepot https://gist.github.com/benclarkk/0593bb25adc530d4e4f871bdec8a7b03
this happens all the time, even when using local files.
60% sure this is different from https://discuss.haiku-os.org/t/installed-haiku-ran-updates-now-pkgman-crashes/9346/3

At this point we are just giving up on repairing the problem, and instead working on releasing R1/beta2, which hopefully will be out in about a month and a half. Switching to a nightly build for now will resolve the problem.

this happens all the time, even when using local files.

No, I think it generally happens on OpenSSL startup due to symbol conflicts. It’s just unavoidable unfortunately, as that version of libnetapi was not linked against an OpenSSL with symbol versioning.

OpenSSL 1.1 has symbol versioning by default, I think, so future upgrades should be smoother. Or we’ll finally ditch OpenSSL entirely; but they’re finally getting sane, so maybe not.

I would have done that a long time ago already if I could find a non-GPLed implementation of these things. There’s Botan I think, but it needs C++11 so we can’t use it for gcc2. All the others (CyaSSL/WolfSSL, GNU TLS, …) are GPL or similar, I think. Well, NSS is under MPL which is a bit less annoying, maybe that would be acceptable.