It boot fine on my UEFI system with Legacy boot enabled. Without legacy boot enabled, it will not boot. I could get into the desktop and Haiku could use my screen’s native resolution. It also supports my Realtek Ethernet card. I opened WebPositive and tried to type something in the address bar, it seemed Haiku still has trouble with drivers, as when I typed only one letter it displayed a series of this letter. e.g: h becomes hhhhhhhhhhhhhhhhhhhhhh. I can’t get my keyboard to work properly. What very strange is after that the mouse stopped working, too. I can’t reboot normally using the menu but have to reset the system because random windows appeared and I can’t select the menu I want.

It seemed there is still a long way for Haiku to be usable on real system.

Are you sure it is not your H key that needs repair?

I have Haiku on five different laptops (Dell, HP, System76, Toshiba, ThinkPad) and one I7 desktop and have never seen a problem like that with Haiku.

On the other hand I have done lots of repairs with struck or sticky keys.

I’m sure that my keyboard is fine. Haiku has problems with the drivers, I think. When I use Haiku under VirtualBox, also with this keyboard, everything worked fine.

Hello. Could be useful if you fill a bug report at:
https://dev.haiku-os.org/

Including the output of the listdev command.

Before filing a bug report, is it possible your key repeat is set too high or sensitive? What happens if you lower the repeat rate (even if all the way to 0)? Will keys repeat when pressed after this?

Well, you have some alternatives:

For keyboard problems listdev is probably useless. The keyboard will not even be visible there.

What would be relevant, maybe, is the HID descriptor found in /tmp in Haiku when the keyboard is connected. One possible problem is with keyboards implementing N-key rollover with N > 8, because that is usually done by pretending to be multiple keyboards with low number of keys (USB HID was not greatly designed in this area) and I think our driver is not too happy with this, yet.

I can’t make my keyboard to work, so how could I enter this listdev command in the Terminal?

Makes sense if your keys are repeating… the l would do lllllllllllllll before any of the rest was even typed:

it seemed Haiku still has trouble with drivers, as when I typed only one letter it displayed a series of this letter. e.g: h becomes hhhhhhhhhhhhhhhhhhhhhh. I can’t get my keyboard to work properly.

So since my suggestions in an earlier post were passed right over – have you tried turning down the repeat and delay rate? In the latest Haiku, these sliders can be found in Input preferences (as shown here from inside VirtualBox): 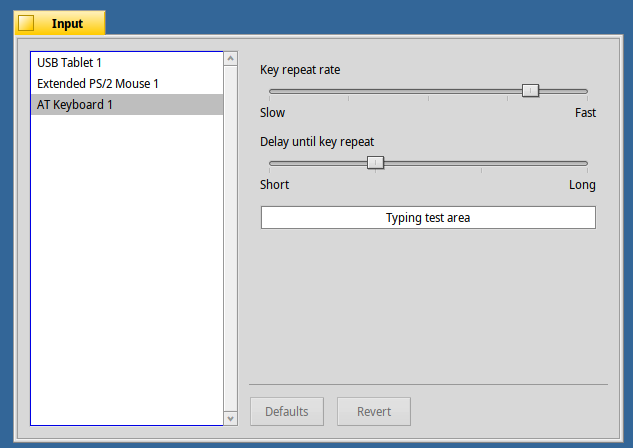 Just bringing this up as a helpful hint before blaming Haiku’s drivers or filing a bug report.

Hi. I didn’t blame Haiku’s driver. It’s just my guess. And it could be wrong

I dismissed your reply because I no longer have the spare HDD to install Haiku. After I failed with Haiku, I tried with OS108 (NetBSD based) and it worked fine for me. Because this reason I don’t think I would write Haiku’s image to my USB stick to test again (because of laziness and lack of interest). As I have no idea about what happened I didn’t fill a bug report. I don’t report something that I don’t know or unsure.

Haiku still lives happily under my VirtualBox on Linux, though. I think it’s better this way

I think for a while Haiku will be a system which requires some research to determine whether hardware will be compatible, this is especially true if someone is buying something from eBay or similar.

I don’t think people should really expect every piece of hardware to work flawlessly with Haiku. That isn’t even the case for Linux which really is probably the only OS with driver support that is even close to Windows.

I believe it might be nice if Haiku could get more organized in listing supported hardware, or starting some specific efforts to make a small set of hardware well supported. The forum topic managed by @apgreimann is nice but kind of hard to use.

I actually wonder if Chromebooks and Chromeboxes might be good targets since there is a wide variety of hardware from very cheap to quite nice, and maybe the hardware would be easier to support since maybe more of the drivers are open source (though they might not be.) Of course just because drivers for Linux are available doesn’t mean they are trivial to get working in Haiku, but it might be easier than random hardware which only has Windows drivers.

I have better memories about x64 Haiku system than the x86 here. I have some bugs in apps from Haiku Depot…I think more than in the x64 version of Haiku. The x86 version is less maintened for now? (I’m on native x86 system)

The work of @apgreimann is not just a forum topic. He has a nice webpage with all the info as well (linked from the first message in the topic): https://sites.google.com/view/hardware-list-for-haiku/home and the data is also in a github repo (however not in an easily computer-parsed format?) https://github.com/apgreimann/haiku-computer-list/tree/master

It is Def not better that way, you have to do your research when building a box for haiku. Really loving mine, and Haiku is getting better every day.

Thx to the Devs.

The work of @apgreimann is not just a forum topic.

Thanks for the shout out

the data is also in a github repo (however not in an easily computer-parsed format?)

How could I make the info on GitHub easier to read back (i.e. more computer parse-able)? Open to suggestions

you could use yaml format, it is esentially common text and uses only three delimiters spaces, hyphen and colon

Yes, yaml or json (which is a bit better for computers but less good for humans to read - but easier to write I think) would both be fine.