I have installed Haiku R1/Beta 2 RC2 on a Sony Vaio VGN-S4HP laptop. When I Power-off the system, the OS starts shutting down and then it freezes while showing the “Shuting down…” message. I tried bring up the debugger, but I believe the keyboard in unresponsive at this stage. Does anyone have suggestions on how to debug this problem?

Its an old issue, i have the same all over the years on my old laptop.

Do you happen to use the “disable ACPI / APM” function in the bootloader safe settings or in the kernel settings file?

@lelldorin, it is an old (and anoying) issue indeed.
I tried @extrowerk suggestion but unfortunately did not have success:

I checked the bios (Phoenix) but it does not have any power management related settings.

Do you mean to say that ‘Haiku will not shut down’ in a proper manner and only way to power it off is to ‘pull the plug’?

Why would it? It’s a bug that happens to be reproducible on selected systems. And since no devs had this happening for them it is not fixed yet.

I was looking for ideas on how to debug the problem, since the system becomes completely irresponsive.

Make sure your BIOS/EFI is the latest one and update it if possible.

Same error here when I close Haiku with a HP Pavilion dv5000…Message box stay about closing the system but nothing append. And Wifi card seem not recognized (Intel Pro Wireless normaly). I have tested with Nighty build and the new Beta 1 R2…Same trouble.

Well, the best thing to do I guess would be to find a machine which reproduces this and has a serial port. so we can see what it’s doing. Or use KDL and check the syslog from there, if KDL still works.

Probably then we will need to add extra syslog traces to the shutdown process, and find where it’s getting stuck.

With the developper version (Nightly build) I have screen error after a bad shutdown Message with black text on white/grey box in up of the screen and it can’t boot Haiku so I have try with the new Beta version and I don’t have this box message for now but I can’t shutdown it correctly without push the OFF button.

Here is a HP Pavilion dv5000 (intel chipset familly inside this one…).

I have try a BIOS update but nothing change it. The BIOS here is relatively old (2007)
but not find an other update for this computer. (HP & Phoenix BIOS ver F24)
Can’t tweak a lot in this BIOS.

Thanks that’s trick solve this shutdown trouble for me.
I boot up Haiku in safe mode with “Shift” key and check ACPI and APM. After it the shutdown of the Haiku system is complete and normal.

KDL is the “Kernel Debugging Land”, it is accessed by pressing alt + printscreen + d. From there you can type commands and investigate some things. In the current case, especially the “syslog” command would be useful. You can run that, go through the output (it asks you to press a key after each screen of output) and take a screenshot of the last page (you have to do a physical screenshot, with a camera or phone or the like). Hopefully there is some hint in the syslog about how far in the shutdown process the system is.

Thanks for your reply.

yes I see what is it now. I have this kind of box when this error occured. I solve it by making permanently the safe boot options PCM and ACPI set to false. 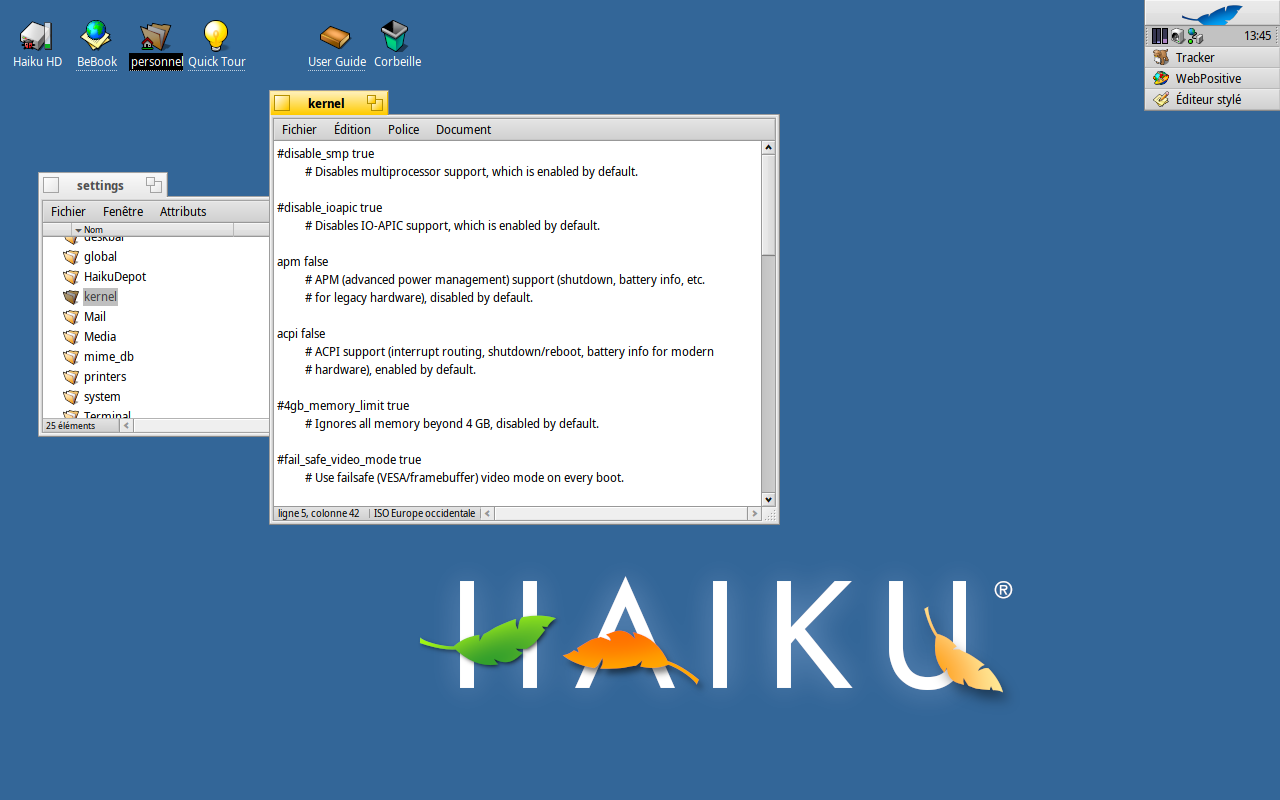 “kernel” file.
This file is in /boot/home/config/settings/kernel/drivers/ path