Those who want to download my packages through HaykuDepot can now do it.

Now all the decors and controls for the Haiku 32bit are available.
Maybe I’ll post develop-version freepascal and Lazarus to the repository.

On the addition of interesting programs to the repository, I will report in this thread.

Awesome! Thanks for sharing all your work! I’ll definitely give it a try!

Not sure what I did wrong, but upon trying it, I get an error in the output:

I think everything is fine. Refresh and look for packages named “haki …” in HaikuDepot.

If you see the haki_decorator_pack and haki_controllook_pack packages, then everything is OK.

Hey everyone, just wanted to write back and mention to the community that his themes work! This is really incredible, @s40in!

I followed the advice and searched for ‘haki’ in the Depot after adding the repo, and there it was! 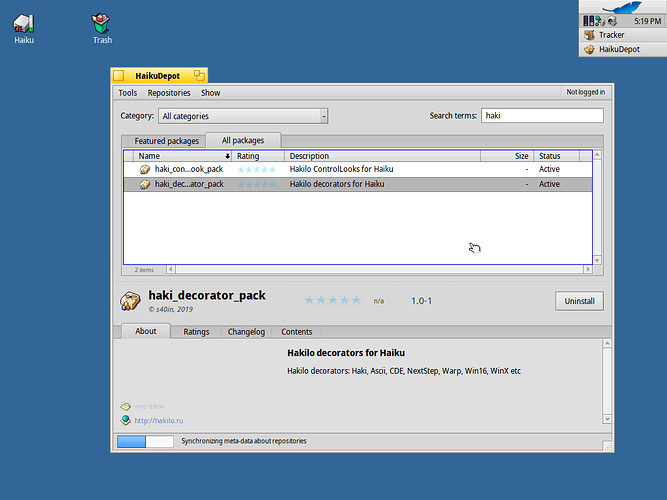 From there, I got to play with a few of the decors and control looks – these are super cool! Reminds me of the fun decors that Dano used to have! I first tried the game decor (I got the M and L reference after seeing the red and green) 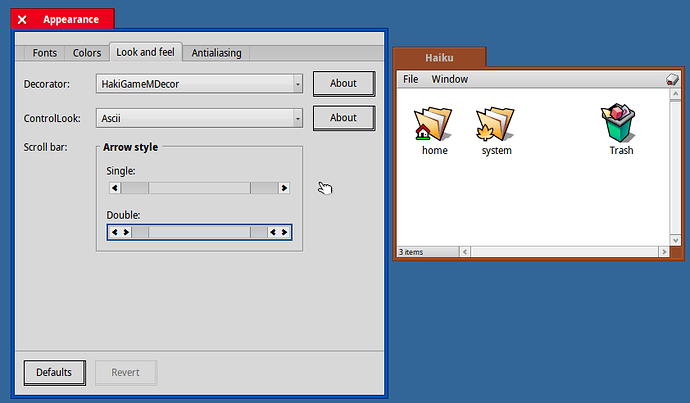 was the NS theme. Now, everyone in the community knows I’m a Mac/NS lover as well as Be, so seeing this one was super cool!

The square look and medium grays of Haiku’s default decorator goes good with it too.

I also tried out the CDE theme – wow! This looks righteous as well! 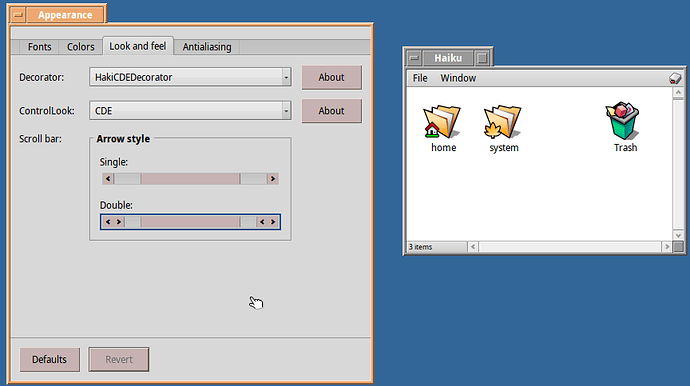 And heck, just for the fun of it, I gave in and tried out the Win16 theme, and hey, it looks kind of like Redmond’s 3.x stuff actually. 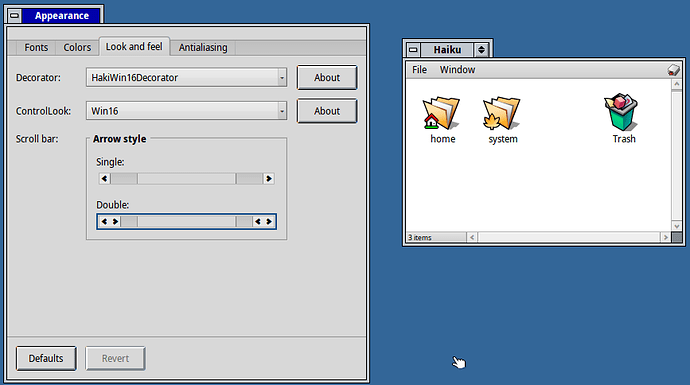 But my favorite one I tried out (saved the best for last) was the Hakilo2 and HakiDecorator. These are really nice! I instantly saw some Dano inspiration in here! 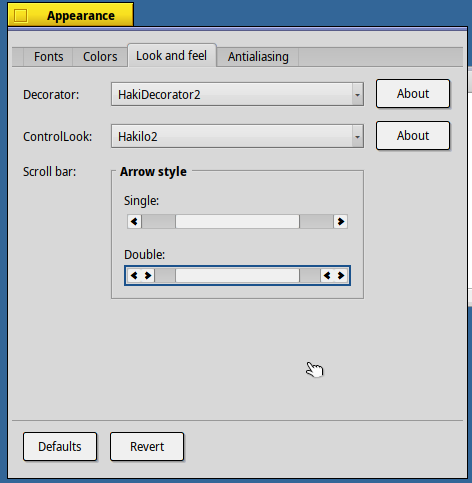 Add a dash of Dano’s lavender blues in there (RGB: 118, 120, 184… iirc), lighten the grays a bit, and voila! Definitely keeping this look! (I love how it merges the good parts of Origin with the classic BeOS/Macintosh close buttons, btw). 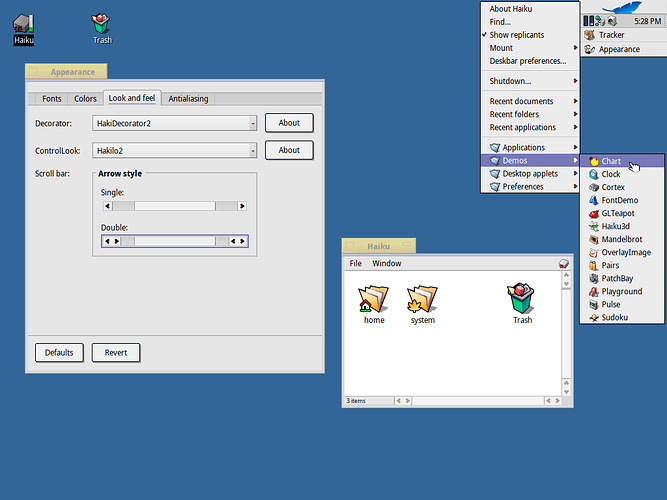 Definitely recommend everyone tries out the themes from @s40in! This is my first time giving them a whirl, and they’re really cool! Kudos and thanks for creating and sharing them!

Can someone make the SkyOS decorator?

@apgreimann, thanks for the detailed review.

Lazarus and freepascal in my Repository.
See the long description of the fpc package in HaikuDepot how copy freepascal settings. This needs to be done only once.

thanks for your work @s40in

Hey uh, your packages cannot be installed on updated Beta 1 anymore. They seem to have a hard requirement for a certain older Beta 1 revision. 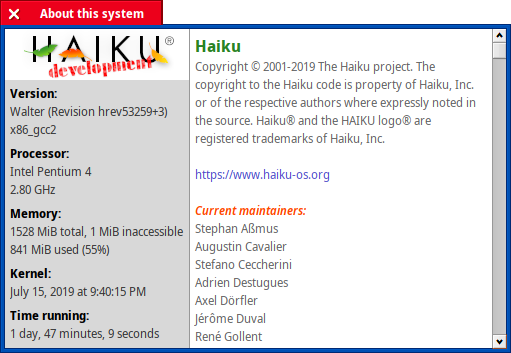 Here’s what comes up when trying to install a package from the repo:

Hey uh, your packages cannot be installed on updated Beta 1 anymore. They seem to have a hard requirement for a certain older Beta 1 revision.

I did not check it with Haiku B1. I think B1 is no support for changing controllook.

Here’s what comes up when trying to install a package from the repo:

It is strange that you can not choose to “ignore” and put the package. Why then add this element if it cannot be selected?

Well, changing control looks is only supported starting with hrev53116 anyway, so it won’t work on beta1.

It is strange that you can not choose to “ignore” and put the package. Why then add this element if it cannot be selected?

Well would be a fine to have this funktion to ignore this error but it is not wanted. You need to create your packages right. In the most times you get a error like this a package is broken and does not run. To try it, copy it by hand into system/packages.

Repo for Haiku 32bit is not updated and will not be update.

Thanks a lot of your work @s40in. Was reading the thread without realizing it was old until I reached your comment. Very interested to try it in latest 64bit nightly. Some of @apgreimann experiments were amazing and I want to try them

OK, this is the result trying to re-create one of @apgreimann favorites which I also like a lot: 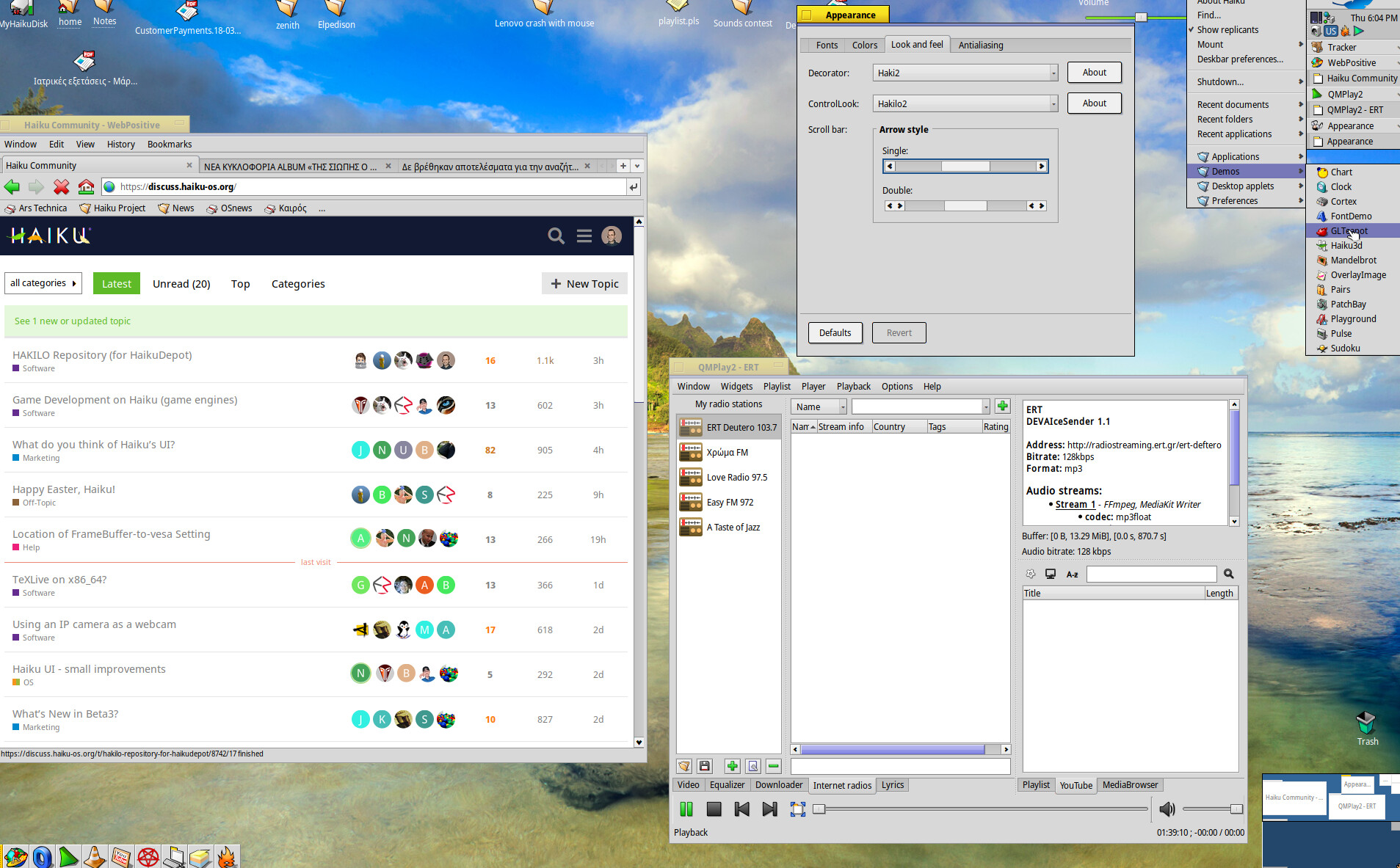 In any case I am glad I have the ability to experiment with this. Thank you @s40in !

I think you’re referring to the work by s40in, his Hakilo projects are where all the decorators came from.

… the only experiments I ever did (that weren’t concepts or mockups) were in a distribution called “Soliloquy”, where I’m pretty sure my brain hadn’t fully settled in yet haha and stuff like this would happen: 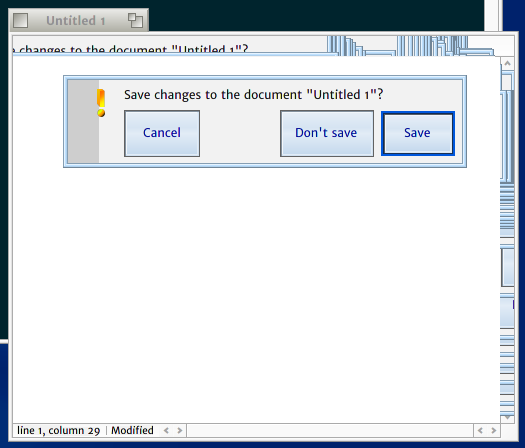 Still, when Soliloquy actually worked, I really liked the experimental look I gave it. Here, I have Terminal and StyledEdit open: 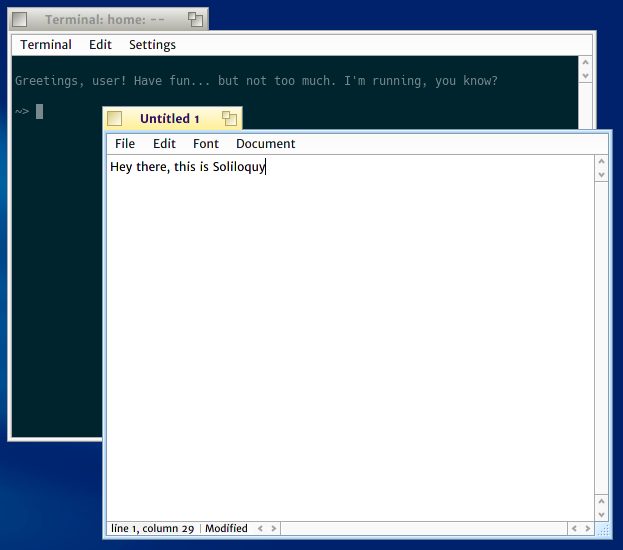 And here’s what sliders and a scroll bar looks like in DiskProbe:

Check boxes and regular sliders looked like this (Deskbar prefs), and here’s also a lit up button: 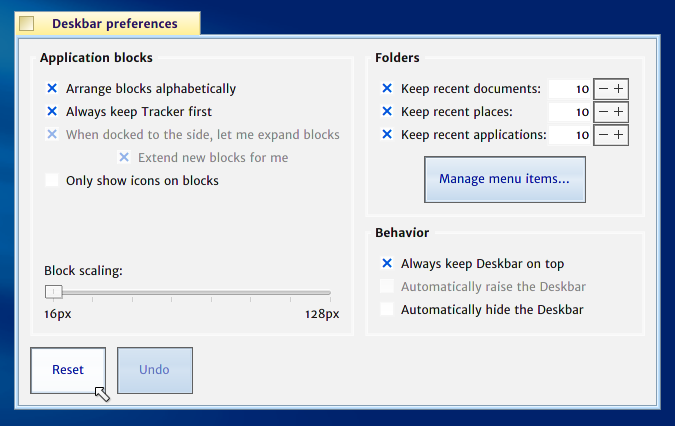 Pop-up menus looked kinda like this, inspired by Leopard: 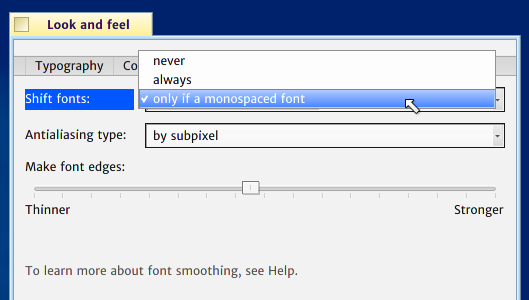 And here’s a another menus pic in the fonts part (showing what panes and closed menus look like too): 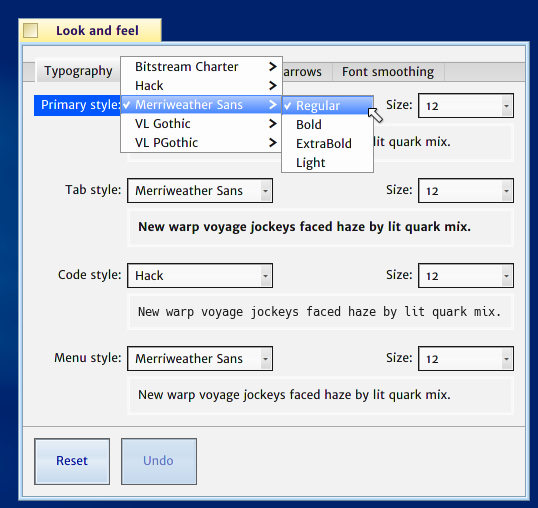 And here’s what a Tracker window looked like with this style: 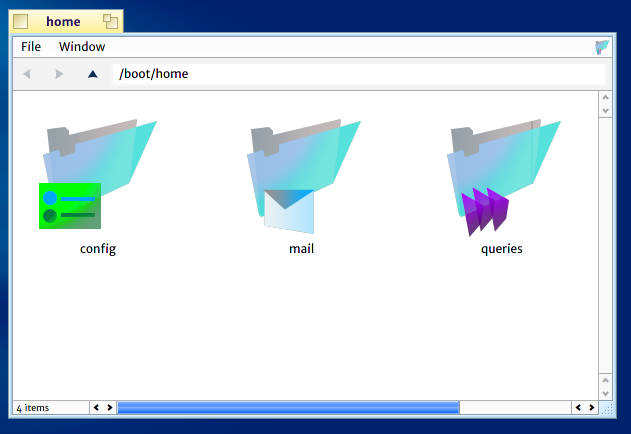 ), in getting to the best part of the messing around I did

buttons are not only taller and have a glass feel but light up when the mouse is over them too:

Out of this fail, I think the part of it that I like (and plan to keep and use in my future projects) were the icons. I wanted to keep the Be legacy, but make them with a more modern style. So here I have a red laser shining through the bottom of the translucent trash with some items in it. 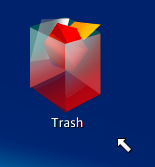 The desktop looked like this, and overall the idea was to make Soliloquy feel more modern with everything. The disk is called “Vintage” because it was meant to run inside kvm with a nice frontend on a Linux-powered thingy called Couplet, which only made it to its first alpha and failed. While it totally failed on itself I think the idea kinda helped me learn a lot (def a lot more than a stack of boring textbooks would 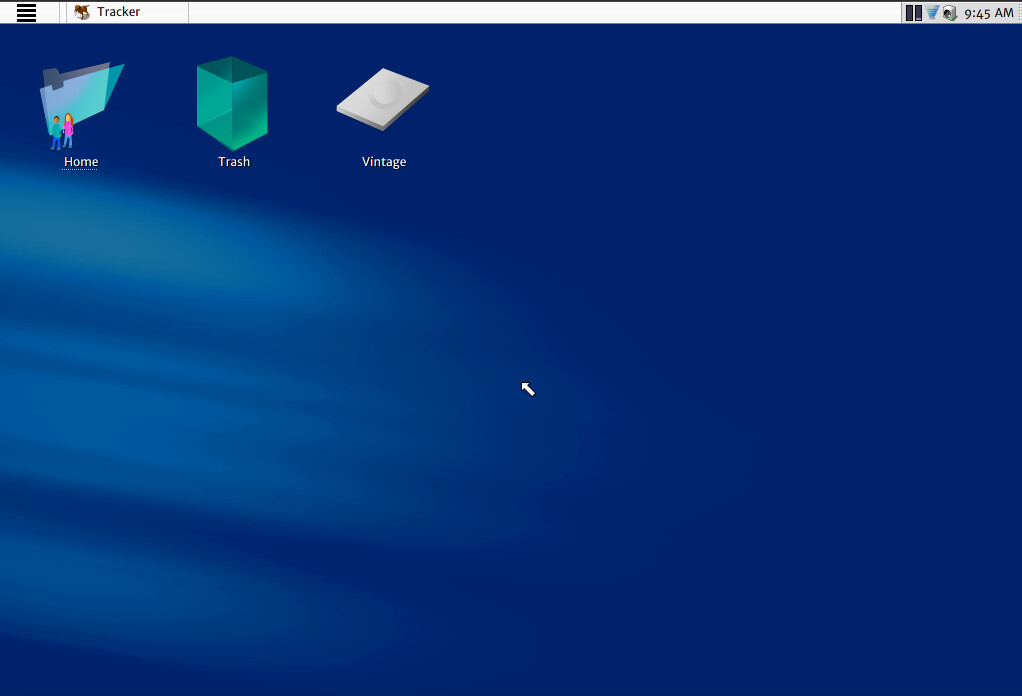 … and as a last thing, if anyone’s curious, this is what Soliloquy looked like starting up: 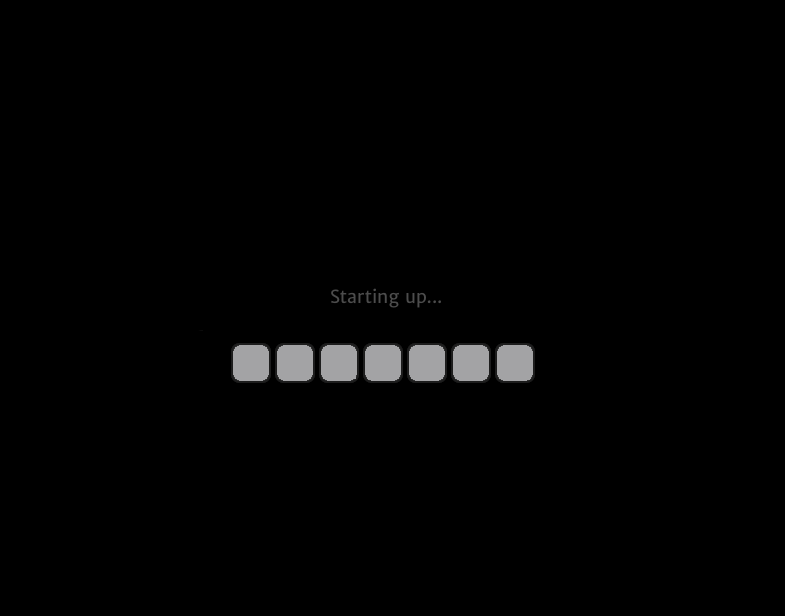 So there it is; thought I’d show everyone for fun

And yeah… even though I’ve got a series of fails (like Soliloquy) behind me, the good news is if I can find enough free time with a computer somewhere, with no gf with a dose of dropout-y 20s magic left as a crazy computer-loving misfit

(what I’ve learned from history seem to be the right mix of ingredients for building stuff) so even though I don’t plan to work on any Haiku distros anymore, there’s still plenty I plan to mess with, like a next generation tablet shell inspired by BeIA/OS on Linux

because I think mobile stuff is the future. But whether it turns out any worse or better than Soliloquy did, I have no idea. But anyways… thanks all.

OK, this is the result trying to re-create one of @apgreimann favorites which I also like a lot

Thanks but this wasn’t me, all @s40in, I reviewed his stuff in a post and like the themes, but this is all his work

The only experimental theme I’ve made was in the failed Haiku distro I made called Soliloquy (a part of a project called ‘Poem’ where Soliloquy was a Haiku distro (which would run inside a VM), and Couplet was a Linux distro. Some pics of Soliloquy are in the last post