Hi, I found a retro digger game on Clasqm repository I’m Trying use a game options from terminal. On game description writing: “Here are the options when you start from Terminal: digger [[/S:]speed] [[/L:]level file] … etc.“ Nothing works. Maybe someone play that game and know how to use these options. Specially I won’t run a “/U = Allow unlimited lives”. Please, someone explain to me how it works.

I agree that we should promote gaming on Haiku…but…

this could become a boomerang due to the fact that Haiku is not ready to satisfy the general gamer. They could eventually come and be disappointed due, for example, lack of nowdays-standard 3d experience and so…

I think it’s better to focus on some specific niches of gaming that we know runs ok in Haiku and could offer great experience. Adventures, for example.

ScummVM runs great I guess. We could eventually try to contact those guys at Thimbleweed Park to see if they are interested in porting a proof-of-concept (not a complete game, let’s be realistic). Others enthusiast fanmade adventures are ready to be played outside and so on…

Oh yes, i remember also the FPS shooters i.e. Quake2@BeOS and QuakeIII-Arena, even Doom and that Duke Nukem port (named “Dave Gnukem” on BeOS). Also a FreeCiv clone and OpenRaider (free Tomb Raider clone from a russian developer iirc) and so on

Hi, I’m the main original author of Dave Gnukem, glad to see the interest in it.
Would be nice to have it running on Haiku. Dave Gnukem has since reached ‘version 1’:
https://djoffe.com/gnukem/
Note it’s not really a ‘port’ of Duke Nukem 1, as the game is quite different - the idea was to have ‘similar look and feel’ to DN1, but is more like a parody of DN1 (I didn’t want a strict clone for two reasons, firstly legal, secondly wanted something a bit original … if anyone’s hoping for DN1 on Haiku then something like DOSbox is probably better). I’m new to Haiku and don’t know it but just by chance I was trying it out the other day in a VM (before I saw your post), as I like to follow alternative OSs, and of course I gave it a quick try to get Dave Gnukem running (in theory I don’t think it should be difficult), but I got stuck on a small issue unrelated to the game (following the instructions to try set up haikuports in order to try set up SDL I got some error where the latest haikuports git scripts seemed to say they needed Python 3 but Python 2.7 was what came installed with Haiku, or something like that, I didn’t see an obvious way to fix it so I gave up … I have limited spare time but if someone wants to help get Dave Gnukem we could give it a go and I could try assist (eg if someone tries to get it building and you get C++ compile errors I’d be glad to try help fix), or if someone knows how to easily fix my haikuports Python version problem I could give it another quick try in a VM.

The source code is relatively straightforward C++ make project which compiles on almost any Linux, basically just needs two dependencies (libsdl1.2-dev and libsdl-mixer1.2-dev) - then basically ‘git clone’ the source code, git clone the data, then use ‘make’ to compile (the project readme on github has instructions). The sound can be disabled with a simple compile option if libsdlmixer is a problem. I imagine there might be slight Makefile tweaks needed.

You do not need HaikuPorts to install SDL libs, just install the devel packages using HaikuDepot or pkgman (pkgman install libsdl_devel sdl_mixer_devel for sdl 1.2). Most SDL based games compile pretty easily. I can give it a shot later today.

There is an open source engine for Thimbleweed Park (though it is still work in progress). Alas, it doesn’t use SDL as backend but SFML which is not ported to Haiku yet. The engine to run Thimbleweed Park is called Engge and can be found on Github. I looked at the SFML code and it seems like it wouldn’t be too hard to port to Haiku. I’ll give it a shot and if I can get a crude port done I’ll try to get that Engge to work too, which would give us possibility to play Thimbleweed Park on Haiku.

You do not need HaikuPorts to install SDL libs, just install the devel packages using HaikuDepot

When I tried this, it didn’t seem to install the libSDL .h files … maybe I missed something, I’ll try again.

EDIT I got it working

I had to make one change to the Dave Gnukem Makefile - the “INCLUDEDIRS=” line should read:
INCLUDEDIRS=sdl-config --cflags
(Edit4 I’ve now committed a small update to the official Makefile that should detect HaikuOS automatically) 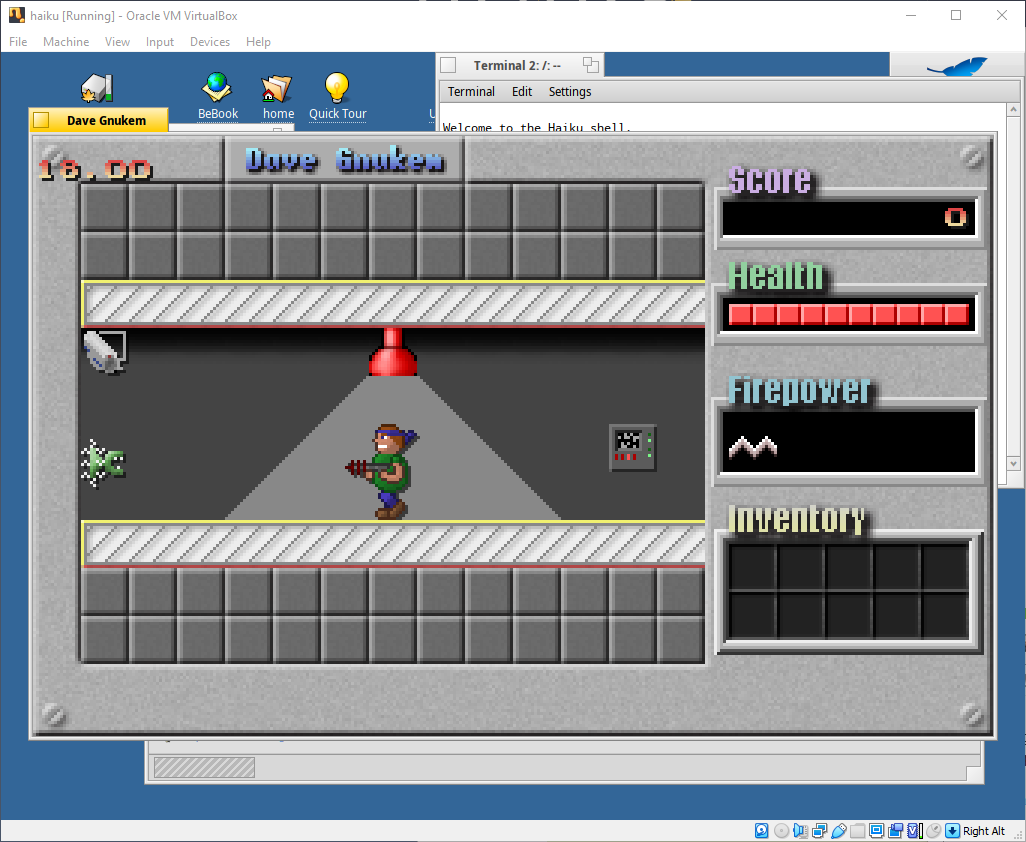 EDIT2 Of course now a more difficult part would be making a package (Someone mentioned this game had a BeOS port. It did as I recall in the past, but I was not involved with that at all … doesn’t matter anymore.)

About your instructions, you need to add “sdl-config —libs” to ldflags in makefile too.

you need to add “sdl-config —libs” to ldflags in makefile too.

I never had to, not sure why.

I’m a bit nervous to break builds on other platforms if I change the official Makefile, so I may commit a “Makefile.haiku” to the github master, then the instructions would be “make -f Makefile.haiku”, or somesuch … that’s my suggested approach … or I could try add a couple of lines to detect haiku

Sorry, my mistake, that addition is not needed, the ldflags are fine as they are.

In theory that change is indeed “more correct” than how it is in my rather simple ‘official’ Makefile, but I’m a bit nervous to change the official Makefile as there are other ports to a few other platforms forked from it, some have their own custom pre-build patches onto this Makefile.

One small issue I’ve noticed, the audio seems to be delayed by a second or two. Not sure if that’s a VirtualBox-related issue or a Haiku issue or a LibSDLmixer-on-Haiku issue. Never noticed that on any other platforms before.

You also have that?

Edit I see Dave Gnukem is in fact already in HaikuPorts: 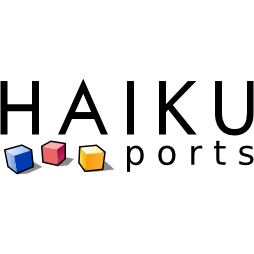 I didn’t know that. I see there may be one or two other small patches.

The new ResidualVM port is working nicely with: 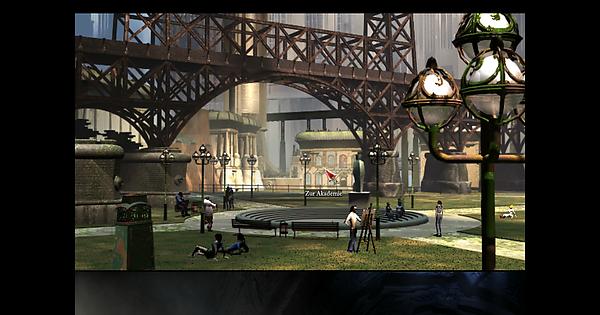 2 new ones, CaveExpress and CavePacker, can’t take full credit for the recipe(s) as the primary work was done by @Ra-V2, finetuned it so it doesn’t start in fullscreen and some patches to make it launch from Tracker/Deskbar, and reference to the luac compiler 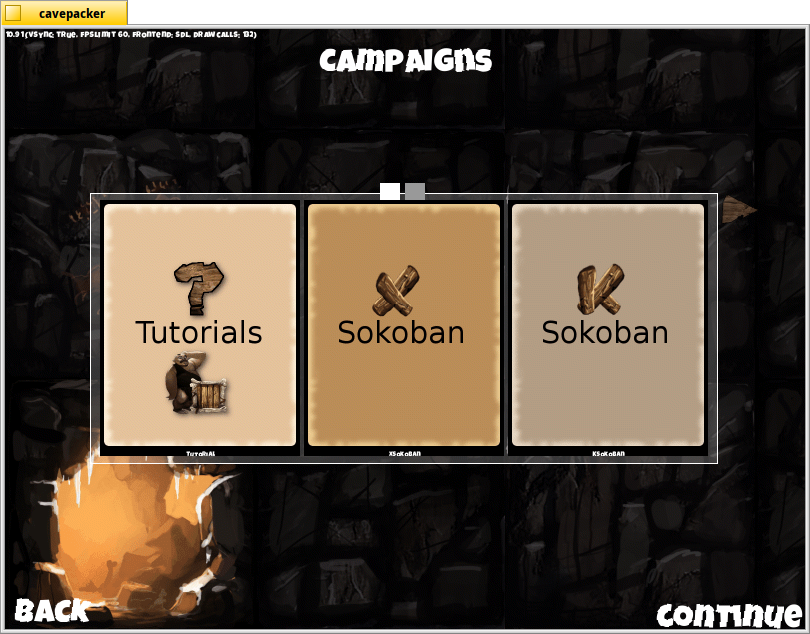 And kudos to @extrowerk for the groundwork!

I set up the blog and I’ve written four posts (SuperFreeCell, BeMines, BShisen and Pipepanic). Now I want to know your opinion about the blog, suggestions, warnings, recommendations and so on in order to make the blog better.

…you could or should work on your website on a regular basis, at least once a month to keep the information new, informative and up to date to help promoting Haiku

There is something like this already exists, but ok to have a Blog about game.

This link is very old, we create a new besly and move the old besly to old.besly.de

There is another good choice btw.:
BeShare 3.04 is available by default in HaikuDepot by now!