In fact, I kinda like circles for displaying status of a thing the user has no control on it because it is visually neutral.
At the opposite, a checkbox is visually an invitation to modify the attribute. It let the user think that putting a notch there will have directly an effect on the file or further behaviour.

Actually, in FileTypes settings for Boolean attributes, there is an option to display as “Default” or as “Checkbox”. Right now the setting is not considered in Tracker. It’s probably fine to display the check symbol or nothing if the user selects Checkbox there.

Tracker does work with the “Checkbox” boolean attribute. Please have a look at the Extra attributes section of the filetypes etc. workshop of the user guide. To quote the essential parts concerning a boolean attribute:

So, instead of the “x” and “o”, you can scour CharacterMap for suitable symbols.
The nice thing is, that this is on a per attribute basis. You can create one bool attribute that shows the special characters “x” and “o”, and another showing an empty and full circle, or checkmarks or anything else.

Note: To see the changes, you’ll have to hide and re-show the boolean attribute in the Tracker window.

Thanks again Humdinger, should have read the User Guide

Booleans will always be BCheckBox in the new Attribute Editor I’m toying with - I want to edit tags, description etc directly in ShowImage (code is dynamic and will work for MediaPlayer etc as well): 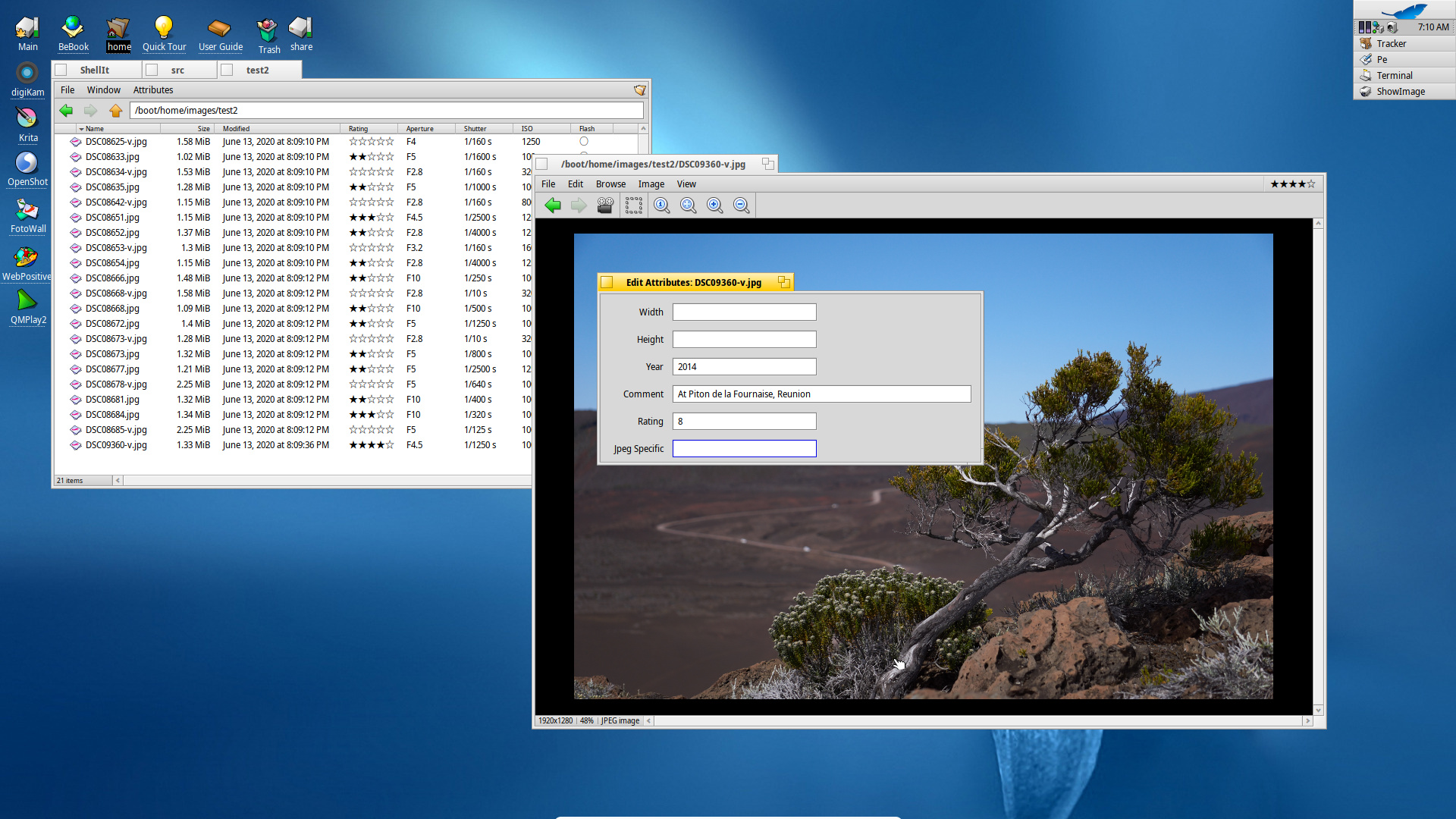 Width / Height should not really be set as editable in FileTypes…

Btw, you found a nicer symbol for a radiobutton true value. I could not find the code for this symbol, do you by any chance remember it?

It’s in the “Geometric shapes” of the Noto font.

There were a few posts / ideas earlier about an index_server that could be the base for this, but seems it not part of Haiku yet.

I just came across an index_server add-on in Haiku src/add-ons/index_server but it won’t compile since it’s referring to a non-existing include file audioproperties.h. Seems to be dormant, too, last update is from Oct 28, 2010.

There was a CLucene analyzer for fulltext search, and an audio tags analyzer.
Would be great to reboot and extend this effort, any updates on this endeavour?

any updates on this endeavour?

Well your research accurately shows the current state. This is clearly not on the TODO list for Haiku R1 and we are focusing our efforts on more important parts (web browser, drivers, printing support, bugfixes, …)

I understand, but I’d really like to see this in R1.1 as it enables a variety of applications and thus is really more a central infrastructure service (I’d certainly love to contribute as it directly relates to my side project I’m now actively working on, finally).
Maybe put it in /attic, unmaintained or at least update the README until it gets more attention, as anything in the haiku/src tree should build imho.

Well, “attic” is innapropriate for things that are not complete yet, and in general this is not how we do things mainly because it makes the history more annoying to track with git when files are moved around.

As I said, if you want to work on it, we accept patches, and if it works well enough we’ll include it in the system.

But having to run a shell script from the terminal did not seem nice, so I was looking for a way to add the script as a Tracker add-on. But it seems shells scripts cannot be run directly, so I needed a program to launch my script.

Sorry – I’m late to this discussion, not having been following the forum recently, but I guess i should chime in!

Does nobody know about ‘xicon’ any more? An app that I wrote in the age of BeOS to run shell scripts from icons. I’m not sure what percentage of my day uses it, but it’s large! My Desktop is littered with xicon icons, from simple ones I just click on to read the BBC or fire up Ruby to ones that you drop files on to process them, such as ‘ShowAttr’ that uses listattr and catattr to display all the attributes of files.

I suppose it’s my fault that I’ve never pushed to get it into HaikuPorts – which seems the only way an app will ever be visible to the world. It’s just that the old zip file is still perfectly adequate!
In any case, here’s its current location:
http://goodeveca.net/beos/xicon.html

Back to the topic of photo attributes, I even have a script that uses ‘exiftool’ and my ‘gadgeteer’ (which someone has added to HaikuPorts) to edit the exif data of a file and add a “Comment” attibute (which was all I wanted). I could pass this on, but it’s rather tailored to my own needs.