Cut down on 'featured' browsers

I was wondering if we should cut down on the number of browsers in HaikuDepot’s ‘Featured packages’ tab.

NetSurf is a lightweight alternative to the other heavier options, so I think we should keep that one. Web (Epiphany) seems to be the most capable at this time, so that’ll stay, too.

Leaves the question, do we keep Falkon or Otter as Qt alternative to GTK-Web or none or both of them?

Never used Falkon so can’t give a vote there, Otter is the only browser here (for me) beside WebPositive so far.

EDIT so for me at least Otter should stay in.

Otter works fine, with some quirks. Falkon isn’t stable nor does work very well (yet).

The answer is pretty clear to me…

Otter Browser is the one I use most on Haiku,because except for the lack of modern web standards,it works perfectly fine here.
It’s fast,it’s stable,it integrates good with the Haiku UI and it’s by far the most feature-rich browser we currently have.
Otter should stay a featured browser because for me it’s that single must-have application that I install at first on every new Haiku installation.
I’m also for keeping Falkon to show the big amount of software that already (more or less) runs on Haiku,but as it is really very buggy and currently can’t be used for most purposes,I prefer dropping that one if one browser really needs to be removed.

So… drop Falcon, but keep the Otter one?

Due to actual state of QtWebengine port, I would drop Falkon from feature list. People are expecting that software on this list are working and useful. If someone ask why it is not there, we can always return the question “Did you really try it?”

Voted to remove Falkon for reasons already mentioned: crashes within minutes every time. Otter works for most of the sites most of the time.

Falkon renders well between crashes, but Otter seems to have the stability edge of the two.

Gnome Web consistently crashes on startup for me. I’ve never been able to use it on Haiku.

Maybe you have this problem, give @3dEyes’s solution directly below a try

leave the most stable browser, choose only 1 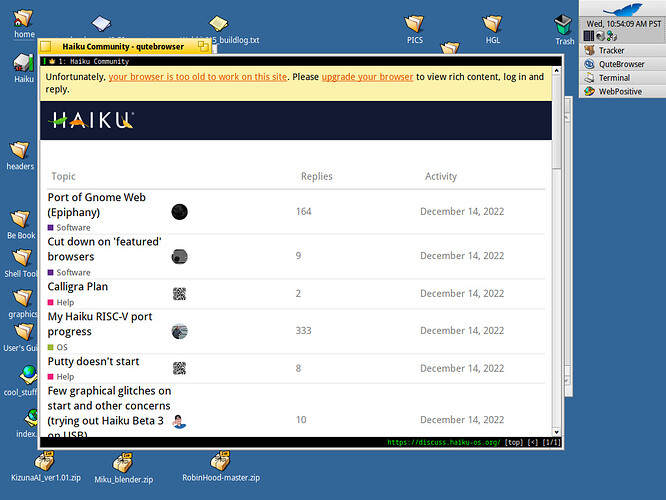 As much fight we can have left in the game, the reality is starting to poke out its ugly head from the browser developers. The end is near - stop ingesting outdated web engines/browsers or face extinction… (just kidding)…

Having to support the web engines and then the dependencies can become an issue. KDElibs, GTK+, Qt, python and other frameworks can easily break backends or add prerequisites outside the scope of certain minimalistic benefits.

I definitely think there should be a finite number of ‘Featured packages’ in terms of those with shared features. Let’s either push one as the ‘best choice’ or consider whether there is an objective criteria that ought to be used to decide.

Also, if the primary developers/repository maintainers of Haiku are going to encourage use of a particular web browser, then it really should get the focus in terms of fixes and functionality.

Doesn’t featured software mean it’s the best recommended software out there for haiku? I wouldn’t think it’s good if we only name native programs here, that’s the same as the standard “whoever pays more is at the top”, principle the same.

Here it should really be decided what would be the best software for the “user”.

Thanks, that did the trick. I hope that package manager bugs will be fixed. I can see that Gnome Web works very well now compared to other browsers.

Typing this from Gnome Web on Haiku.

Thanks everyone. I think the poll can savely be interpreted as: keep Otter, relegate Falkon to the back bench.

Remember, it’s not about removing any software from HaikuDepot, but just to cut down the number of similar applications in the “Featured packages”. Falkon now hunts with his half dozen friends in the “Internet and Network” category of “All packages”.

We try to include highly rated apps in the “Featured” tab, but because only few people rate applications, this criterium is of limited use. Plus there’s still the question how to deal with the ratings of prior versions. Apps sometimes improve (dramatically) with new versions, sometimes they don’t. When to discount ratings of older versions?
Anyway, the low number of ratings alone make manual intervention and community input like in this thread necessary. If you’d like to propose an app to be added/removed from the “Featured” list, rate it accordingly, and consider opening a thread for discussion.

Strange!
Web is the only browser that does nearly everything , for me.
And it’s also fast, on my 2007 HP laptop!