and concluded that both

relates to the chipset - from my point of view.
Also clarified this bug/missing support affects more users than me myself and @zuMI who also reported
in my ticket.

Summarized : that was opened about my FUJITSU SIEMENS Amilo Li 1720 Laptop but should be
modify to a general issue related to ATI/AMD Radeon Xpress 200M/200/200P Chipset versions.

In my case there is

one hand boot issues regarding

then the USB subsystem contains

I accept that our HW is old and there is more focus on more modern machines, but as I wrote above – more Intel and AMD machines affected as such chipsets used for longer period and several CPUs but with same or similar Graphics, Sound and USB solution - both mobile and desktop PCs.
Recently I saw more forum posts about similar issues
some might relates to these chipsets and not UEFI/BIOS settings/configurations only.

Thank you in advance
if someone of you checks
mostly USB subsystem related issues,
and maybe Graphics issues (as Radeon as I knew/learned from writings : AMD is more supportive related the docs and engineers as well)

… and at least answer questions in the ticket.

I have on board (laptop) ATI/AMD Radeon Xpress 200M. Unfortunately, the system boots only in the “Use fail-safe graphics driver” mode.

Thank you for your report that confirm half of my symptoms with same chipset.

Then the questions are the followings :

Q1 : had you have the same problem with USB booting ?

Q2 : had you experienced problem after desktop reached – no plugged USB devices present ?

Is there any USB device available in Haiku after you reached desktop ?

Honestly, for me, the USB subsystem problems are more important, as not just boot issue, but after I could boot via DVD with IDE/ATAPI interface, no any USB device available/usable.
It prevents/blocks more options : for example install onto external device, or use wireless mouse/keyboard.

Thanks for your answer here
and/or
update in my ticket above (#18076): - adding your

You can copy file and save output to inner disk partition. If other OS also present in there you can give those to the ticket from that - just as I did some other cases. If you have working Internet access, as I had in this case then you can add them from Haiku using Webpositive and registered user in Haiku TRAC ticketing.system ( https://dev.haiku-os.org/ ).

No. I didn’t have any of the problems you listed above. Although the laptop is quite old. 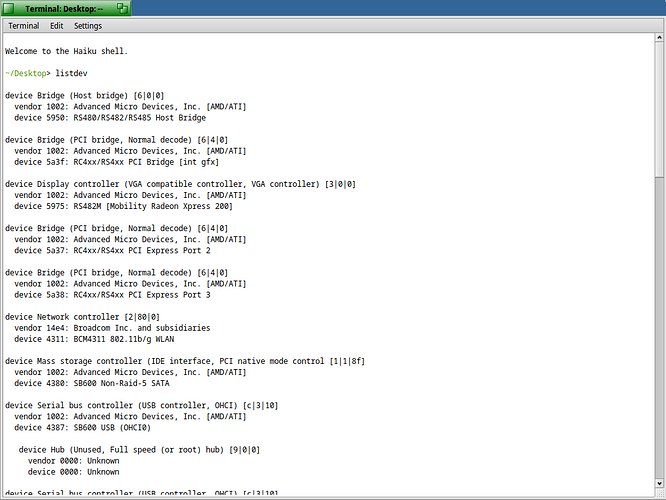 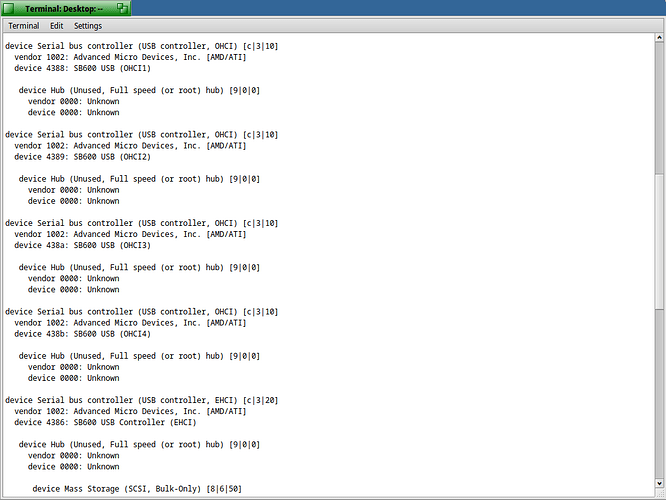 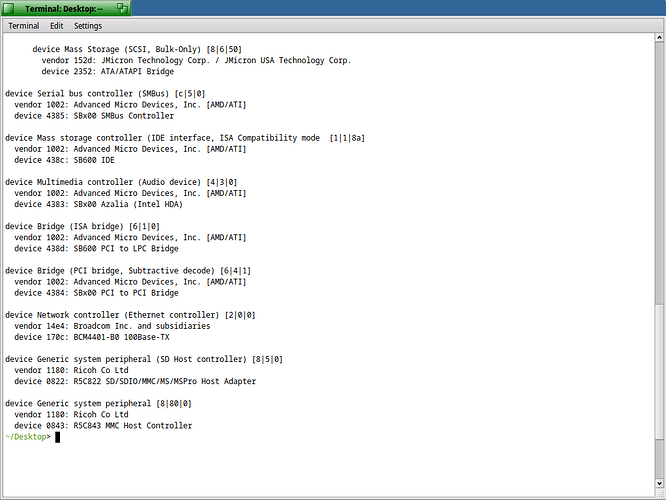 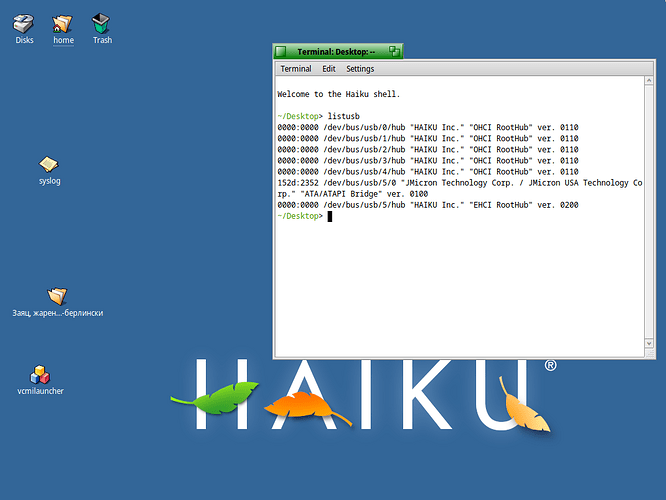 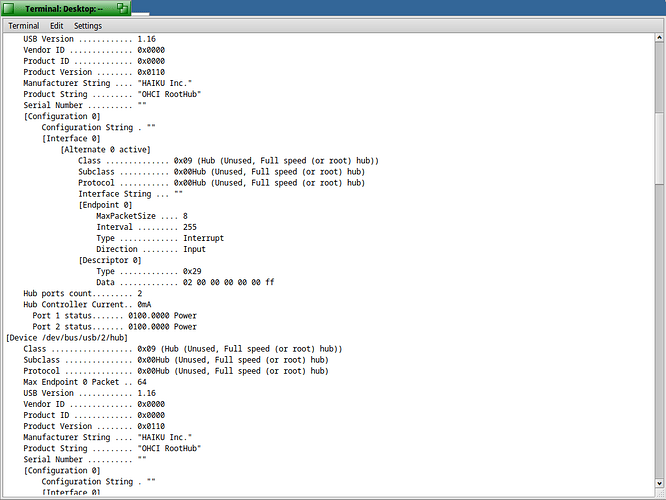 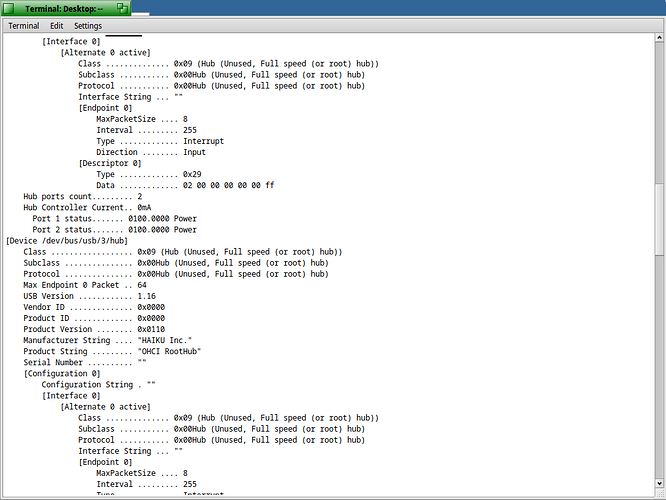 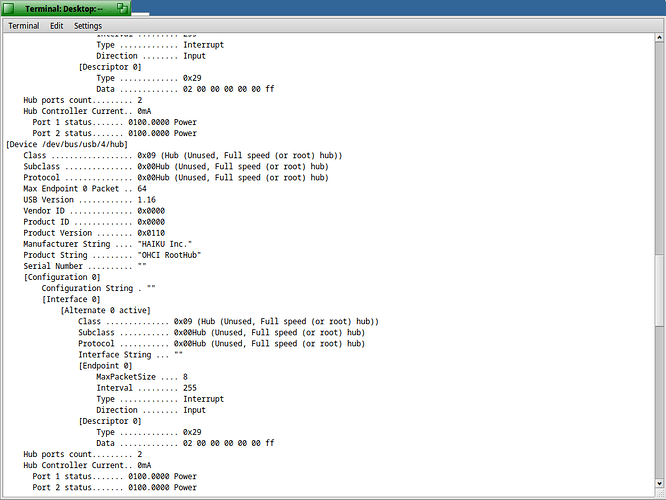 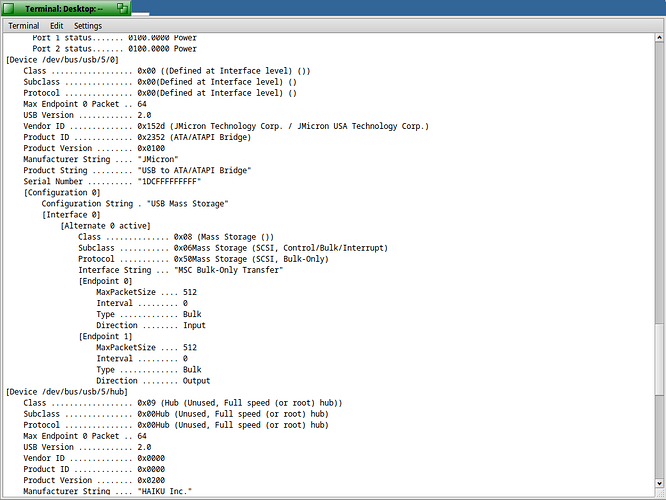 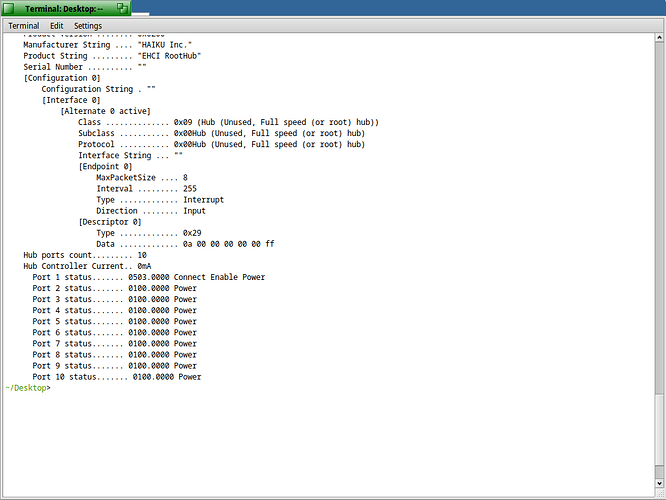 Just a reminder: You actually can copy & paste text from Terminal…

I see, you have the newer version SB600 as SouthBridge, not SB450 as for me and others possibly.

Also I’ve seen the plugged in USB storage device - so it is really different from my case.

Okay, so this way I cannot hope in wider affection due to the same issue for different SouthBridges - so weighing my issue in front of devs
Right, anyway I accept this way USB situation might be specific for SB450 SouthBridge version.

Thanks for your answer -

But still not drag’n drop!
From and to the terminal!

Dropping text into Terminal works. If you think drag&dropping text from Terminal is useful, file a ticket and it may get implemented. Otherwise you will “still” be waiting for a never requested feature.

Ooops … when I saw a number of new posts at this thread and started to hope
finally someone answered my questions of my ticket …
… turns out : it was just another curve of another stuff which does not relate to the title or content of this topic!..

At least another ticket – #8002 – seems can be closed about SB600 USB issue after my forum post.
There was opened about this SouthBridge issue and now – probed with new hrev – there is no USB timing errors in provided syslog. Only detected USB hardware there - good news.
I have hope in similar outcome in my case - SB450 SouthBridge.

I repeat my questions here from my ticket – #18076 – hoping someone would answer them :

Could you confirm that missing driver for this chipset cause the problem with USB boot ?

If so - can it be fixed to be able to boot later via USB option ?

From note 17th of the ticket :

Question #1 : Is ATI/AMD SouthBridge SB450 has a proper driver support in Haiku ?

I do not know how the earlier note of korli about PCI issue relates to this USB subsystem issue, but

Question #2 : Could you confirm that - for me -
Haiku does not need chipset driver to support USB subsystem properly ?

Question #3 : Can we – who has the same chipset in different laptops –
expect to get an RCA from someone who would investigate
why Haiku bootloader fails to detect USB subsystem
in case ATI Radeon Xpress 200M Chipset ?

Thanks in advance for your answers -

There are usually no specific drivers at all for chipsets. Nowadays everything is very standard. USB has only 4 drivers: OHCI and UHCI for USB1, EHCI for USB2, and XHCI for USB3. All PC computers use one of these.

For hard disks it’s the same: all modern hardware uses AHCI which is a standard way to access SATA disks, or possibly NVME for even newer systems. Again, this is a single driver for all devices.

However, things are different for older hardware. The Radeon Xpress 200M is quite bad in that aspect. Nothing works as it should, the SATA interface is not compatible with AHCI, the USB implementation is a bit broken, etc. I know, because I own a laptop using this chipset. I have quickly given up on getting Haiku to run on it. I feel no need to spend weeks or months of work on such old hardware. My advice is to get somethign newer and less broken.

Thanks for your answer - it’s finally pour crystal clear water into the glass, as it said by our saying.
This way for such laptops there are no other alternative but Linux – if Microsoft abandoned / killed supported Windows version on them.

Unfortunately it is not accidental I try to install Haiku on old laptops - I own those actually and no hope for modernize … financially.
Besides of material difficulties, so every day needs … I wanted to give a second life to these machines as well.