There is Audacious in Haiku Depot ( and Qmmp and Clementine) and probably alot more.
I would really prefer ability to run CL-Amp and SoundPlay on 64bit Haiku - anyone know if that is possible?

I looked around and it looks like they are old BeOS applications. I couldn’t find source code. So probably your best bet is to wait for 32-bit binary compatibility on 64-bit Haiku.

I’d love to do the same. I do use Audacious for internet radio play on Haiku. XMMS was a high quality app IIRC. I use to use it on Linux and actually have it installed on FreeBSD with CDE (VirtualBox). Works perfectly there. 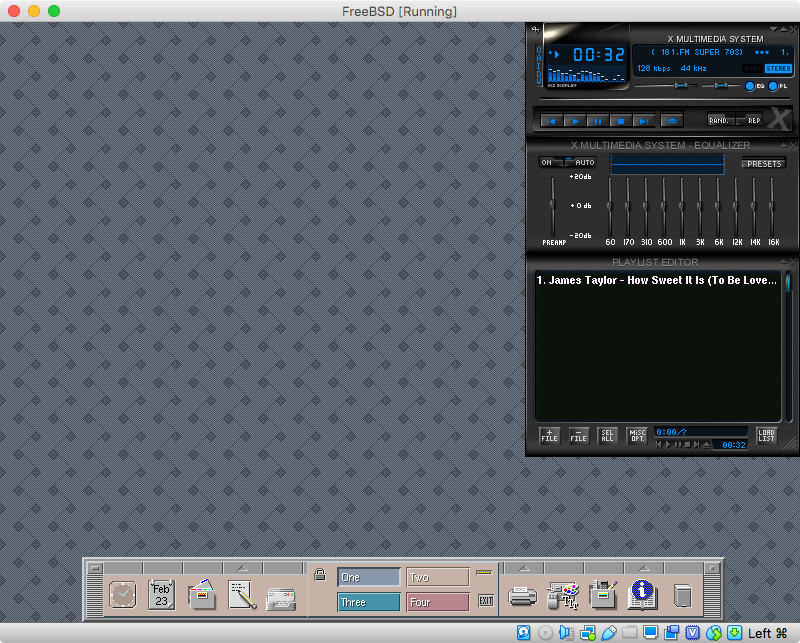 I think the primary issue for a music player being ported is the sound output. I have no idea what general API is available on Unix for this, but porting would likely require either some sort of wrapper API to the Haiku Media Kit or just adding the necessary code to hook into the Media Kit from the application’s code directly. Unless this was somehow already part of the Xlibe work, but I don’t know.

At that point the effort might not be worth it with several similar applications already available. It would really depend on whether it has more features than the native alternatives. I’d prefer we focus on native apps and improve them versus more efforts to port foreign Unix apps.

There is a PR for libao (a portable audio library) which provides support for Media Kit.

At that point, any music player supporting libao would be instantly working on haiku.
So vote, ping, push the xiph developers for this merge.

At that point, any music player supporting libao would be instantly working on haiku.

This won’t change a thing, given the patch is already available in libao at Haikuports.

It’s a shame CL-amp appears to still be closed source… I guess it will be lost to bitrot, perhaps it could be reconstructed from it’s plugin API though I think there is source for that at least on archive.org.

Soundplay was working a few years back

Soundplay was working a few years back

If you want a native player that’s opensource, there is APlayer. For some reason no one seem to like or use it however. I made a few fixes and cleanups to it a few years ago.

I think I tried it but it kept crashing on me.

Not themable is it? For whatever reason people love to theme their audio player.

It certainly looks functional though.

If you want a Winamp-style themable one, Ryan Gordon (developper of SDL) is working on a Winamp clone right now. You can check his videos about it here: Writing a simple media player with SDL, part 1. - YouTube

So that’s an option or at least it will soon be.

If you want a native player that’s opensource, there is APlayer

The latest code from your repo doesn’t compile on a recent x86_64 Haiku with GCC11. The errors are related to narrowing between integer types. I looked at the code and tried to fix the errors but wasn’t very convinced in my solutions, especially in SIDPlayer.cpp with the sample conversion stuff.