I know this has been talked about before (last year iirc), and may get a pandora box result but anyway, imma discuss about this.

This is not going to turn the os into a linuxed version/competition or whatever, it’s bringing apps here which may be wanted for the end users, nothing more nothing less. I would accept both yays and tomatoes to the face :P.

I have been working for the last days on the dependencies of the gtk2 and gtk3 libraries, twinkering with the cairo and pango libraries.

As many of the dependencies were already covered through the depot (many thanks to the porters), it was mostly a try and error process, checking against deprecated and mismatching code for gtk2 and our quite modern glib libraries. As there are no usable backends for us (apart from the X11 compatibility, but without server) in gtk2, i went into the gtk3 route.

I have succesfully ported gtk3 (latest stable version,3.24.1, from Gnome), using the broadway backend, which is just a webserver that receives the data from gtk and renders it to a canvas through cairo. The apps still run “natively”, as all the computation is done on the Haiku OS, but the interface is drawn on a web browser canvas (on Haiku or an external os browser).

It didnt work with the code downloaded from Gnome, as one cairo surface use was done with an invalid pointer, which put me in angry mode, until i found out that the bug was not in my cairo version, nor gtk but the broadway server code (one of those non-checked return values

Here is a sample of running the statically linked gtk3-demo demo application in Terminal: 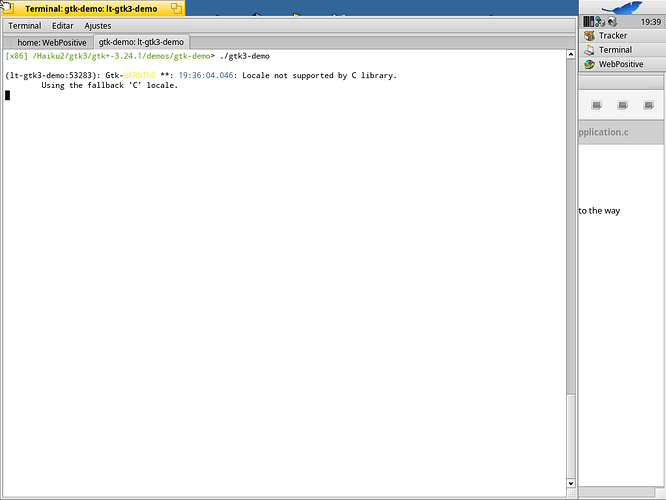 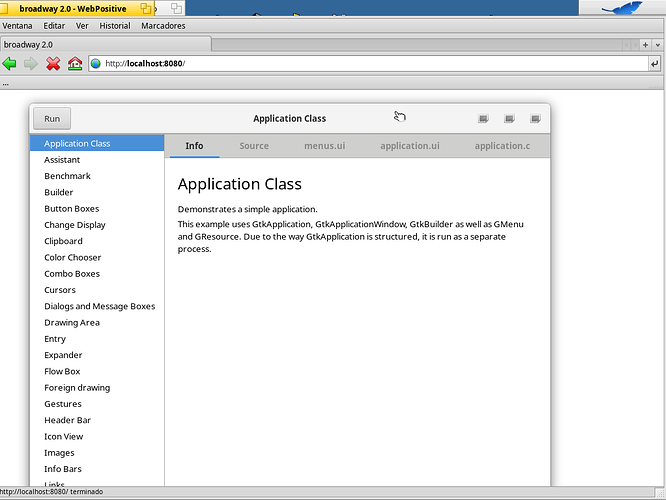 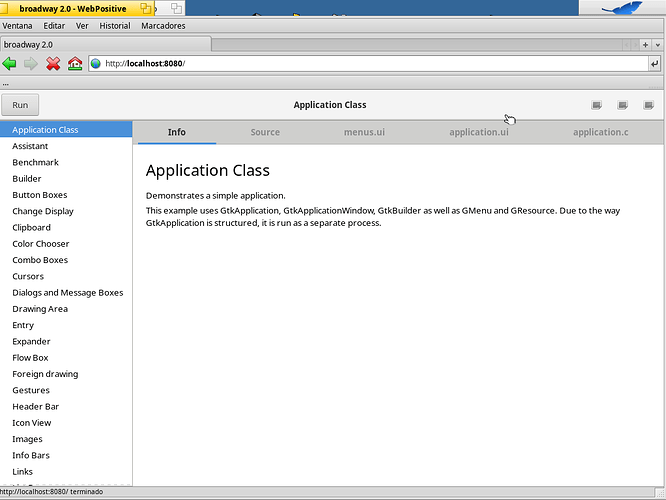 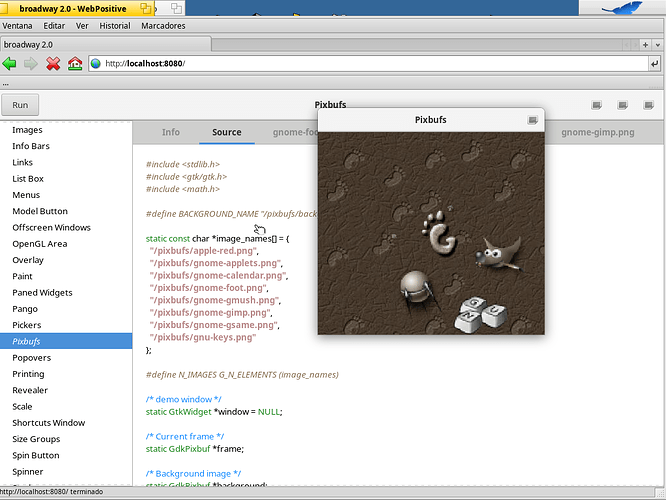 There are a lot of problems with the gnome theming system dependencies, that you would have too in a linux system without gnome packages installed: icons, themes, setting paths, …

For example, this example requires the fallback theme hicolor for gnome, that you have to download separately and place in one of the 6 paths that gtk3 looks for (asuming that the source code is untouched). For testing purposes, i choosed /boot/home/.icons

Still some failures on the gtk part, some crashes on exit or during functionalities that might need revision. As someone said on this forum, all around GTK is a nightmare.

Logical step would be to remove the dependency of the browser and run the drawing part into a canvas application, that’s launched with the gtk program in use with some library like SDL(like Extrowerk proposed in 2017, a fake xserver/rootless xserver like) .

Draw the cairo surface in a haiku native gui app. As i have not dived yet into the Haiku UI kit, can you have a “blank” window with a cairo surface to draw/receive pixel data?

Modify the step 2 backend to more native widgets, if possible, but having apps running already.

I’m still working on doing out of haikuporter test (aka doing make’s on my own folders), but the experimental recipe may be up soon.

@extrowerk Gtk versions above 3.x require a cairo library that’s satifisfied already by the haikudepot version of cairo (1.14.12) but the recipe doesnt have some packages required for the code to detect cairo-gobject . I have tuned the recipe, based on revision 1 and enabled that feature and it’s available on my github (Cairo-gobject recipe ) for expert review. Since the changes shouldnt affect other packages, can it be updated on the official repo/depot someday?

Also, a newer version of pango (1.41.0) is required for the gtk3 code, so i made a recipe for it too and it’s on my github repo, but it’s not so final as the cairo one, because i might need to compile gobject-introspection and generate a recipe to be used in gtk3 and pango as dependency. Right now, the recipe has a patch to disable it in pango 1.41.0. Could this be updated too in the depots when i check that go-introspection issue?

Probably kinda copy what the QT port does (it does setup a canvas using the BeAPI search for proxy in the QT port code) that QT then draws into, its probably a bit different but there should be some ideas there.

You would just give cairo that canvas and pass back through clicks and such back to GTK from the canvas.

Nice job, create a PR for all of the recipes and let we go trough it. You will get help and ideas for sure.

This means one day will have apps like Inkscape?

Mmmm yes and no. I tried to compile a real app to showcase but apart from gtk3, they have several dependencies that are and are not on the depot (more porting required), so i stopped on the sample already compiled apps.

Also looked on Darktable (read about it on this forum), and I think that once gtk3 recipe is up, and the other dependencies are met (missing ones are one or two libs), it could be run on a browser. Unless some things like file opening fail or so.

But found some issues that need to be solved and yadayadayada.

Recipes on my github

Gtk3 takes a big chunk of your time to compile (30mins?1hour?), so I prepared a release party pack with all the hpkgs (normal and devel) to play with gtk demo(s).

You should follow Pulkomandy’s recomendation (common sense) of not open/use downloaded binaries from unknown sources of the internet in a blind way, even if that source doesnt stop talking about gtk3. Download and use at your own risk. If you have time and some coffees and haikuports configured, and motivation to solve possible issues and run Haikuporter while life goes on, go for the sources,

Manually opening the gtk3 hpkgs should trigger the dependencies, and give you a system with binaries like “broadwayd” , “gtk3-demo” and so on.

Unzip the hicolor theme in your home or where you think that’s safe and move to your home folder then. The final path should look like /boot/home/.icons/hicolor

Start one terminal (x86) and run the command:

Start another terminal/tab (x86) and run the command:

Open a web browser in your Haiku or another computer and go to Haiku’s ip address at port 8080, where you will see the app running (have fun with the tests!). 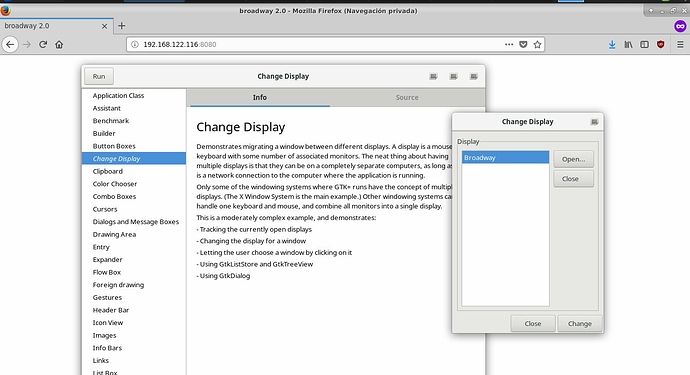 Nice job. Wondering if tcl/tk (which is used by Python’s missing modules tkinter and ttk) is missing because of the lack of gtk. Do you know if it somehow related?

Nope. probably because tkinter itself is not ported (tcl is). Not related to Gtk apart from both being toolkits.

But i guess it’s the same as all the graphic libs here, you need a backend, most of the time it’s X11 or so, and would need to be ported to Haiku or the BeAPI or yakyakyakyak…

There is a GCI task about porting an SDL-based version of Tk (apparently also used to provide support on Android). This may help, we’ll see.

I have 2 or 3 experiments on the bag for sdl things. But in any case, having a SDL backend in Android doesnt matter for apps, because they are “always” full screen with OS or hardware keys to change to other activities or apps.

But in Haiku, how would that be done without full screen? We could have a X11 server in SDL but would look “weird” in a black window, where apps are drawn, like having a smaller desktop over normal desktop.

Is that what we’r targetting to achieve?

SDL2 can do multiple native windows.

But in fact, yes, as far as X11 goes, I would make the integration as bad as possible to make sure people don’t want to use it

Then make sure GTK is ported with a minimal native backend, setting up BWindows and drawing to them, as it was done for Qt.

But in fact, yes, as far as X11 goes, I would make the integration as bad as possible to make sure people don’t want to use it

Then make sure GTK is ported with a minimal native backend, setting up BWindows and drawing to them, as it was done for Qt.

I plan to override calls in broadway client code to a native version, so the cairo surfaces are drawn there. Aka fake broadway to not modify all the makefiles above. Let’s see if it goes OK for a revision 2 of the package.

Has anyone else tried compiling and running this build, gtk3 and the gtk3-demo on broadwayd?
I have, from OP’s github repo, and it works like a charm

… Also I was able to compile gtk+ hello world and run that. I didn’t experiement further.

I’d like to know if people had some weirdness during compilation and testing, which I had. I’m hoping there was a ghost in my machine; I didn’t understand what was going on but thworkarounds were trivial.

1: three times, when compiling gtk itself, the compilation failed on make “GEN” trying to create softlinks to c source files which already existed. I wrote down the details but I’m not at the computer. One was for pixbufs and another maybe for keys. “Solved” by deleting the original files.

2: pkg-config just wouldn’t pick it up even when the package was active. For some reason gtk±3.0_devel wasn’t overlaying/unioning/whatever into the filesystem thingy. “Solved” by rebooting. Just this one package out of the whole set.

Anyway this was really exciting to use. I don’t really like or have skill with gtk+* but let me know if there’s a series of things to test or debug or package or whatever in this category!

Do you know much about adding new GDK backends? It looks like a sometimes (experiemental mir backend for example) they’re put in the repo in ONE BIG COMMIT, which would ironically work in your favour if you were to wrap a qt/sdl/BWindows/whatever shell around it, I think. They’re big patchsets though. Your plan to instead override the calls sounds pretty cool.

Anyway I don’t really know what I’m on about but this was great fun to try out, very exciting.

EDIT: I’m using beta 1 in virtualbox on linux amd x86_64. the haiku installation is x86_64 and i’m on master haikudepot and haikuports

I have, from OP’s github repo, and it works like a charm

Wooohooo!, Someone actively compiled my code!

Glad to hear it worked well. Stopped working in the backend overide by now, but i can see that it would be easier than write a x11 server emulator and later turn into nativelike app.