My progress on real RISC-V hardware

Currently SMP is not used.

I have an old laptop, with the Haiku x64. The computer was freezing when I did updates. I could not solve the problem. The problem was solved when I changed the router for the internet. Now the laptop works very well, it did not stick again.

I can have 4 cores enabled on low usage, when building (some) larger projects with haikuporter it freezes so I reduce the cores to have a stable environment

Next this is what to do with this. Adding emulator additional debug output may help. 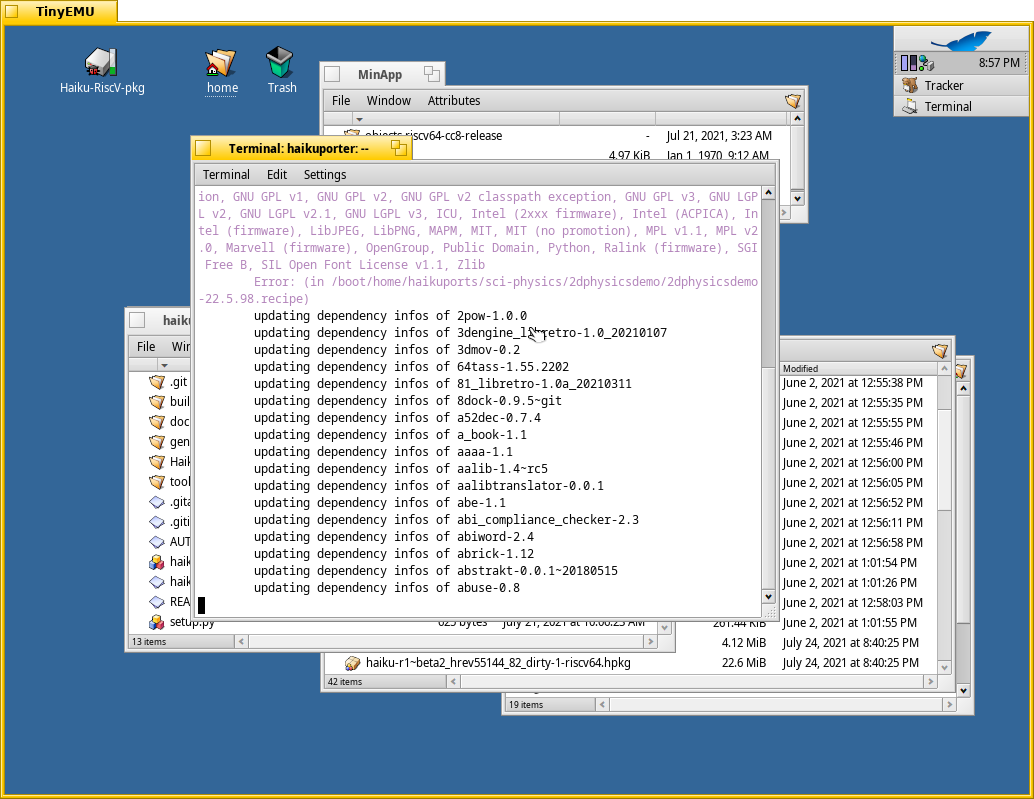 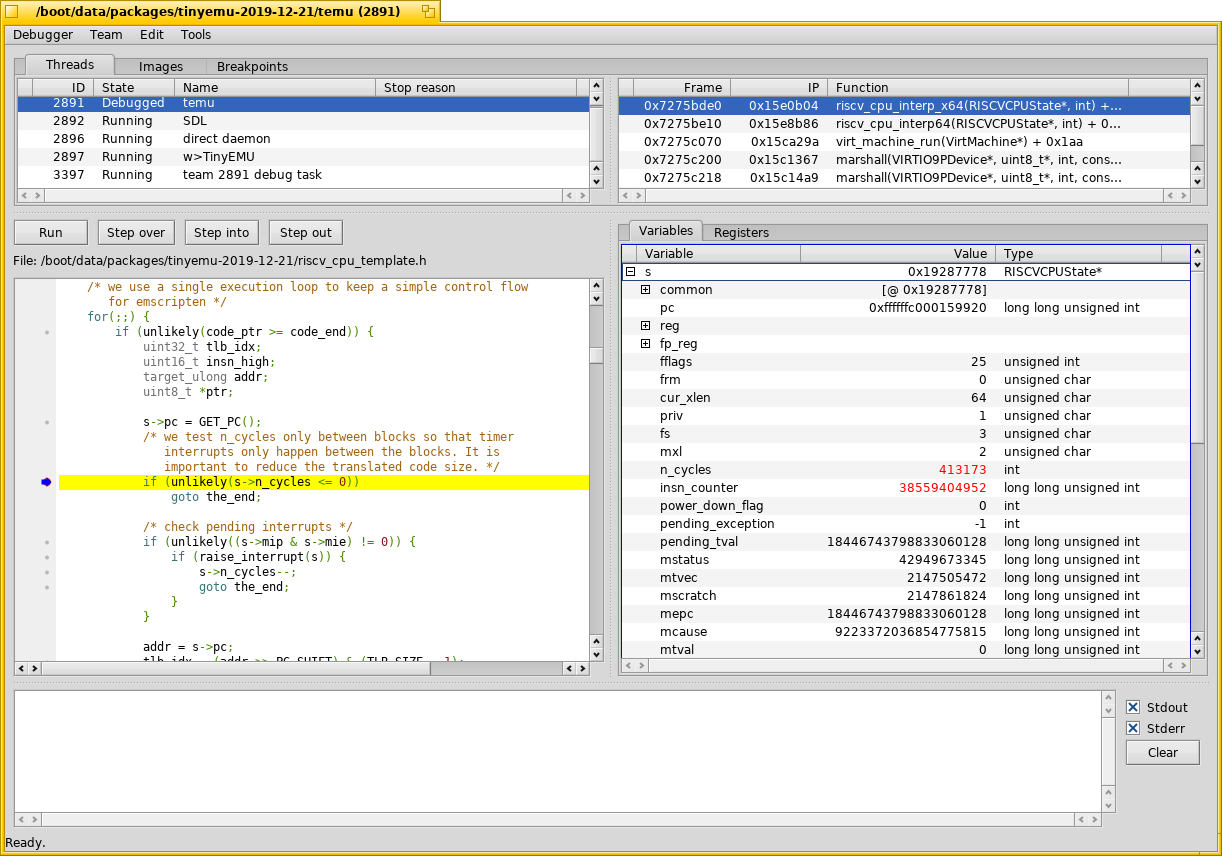 It is infinitely page faulting at kernel trap vector. Page table seems to be broken.

According to additional tracing freeze is caused by using page table (SATP) of deleted address space of terminated team.

I fixed freeze and now haikuporter successfully complete dependency scanning. No KDLs or freezes are observed for now. 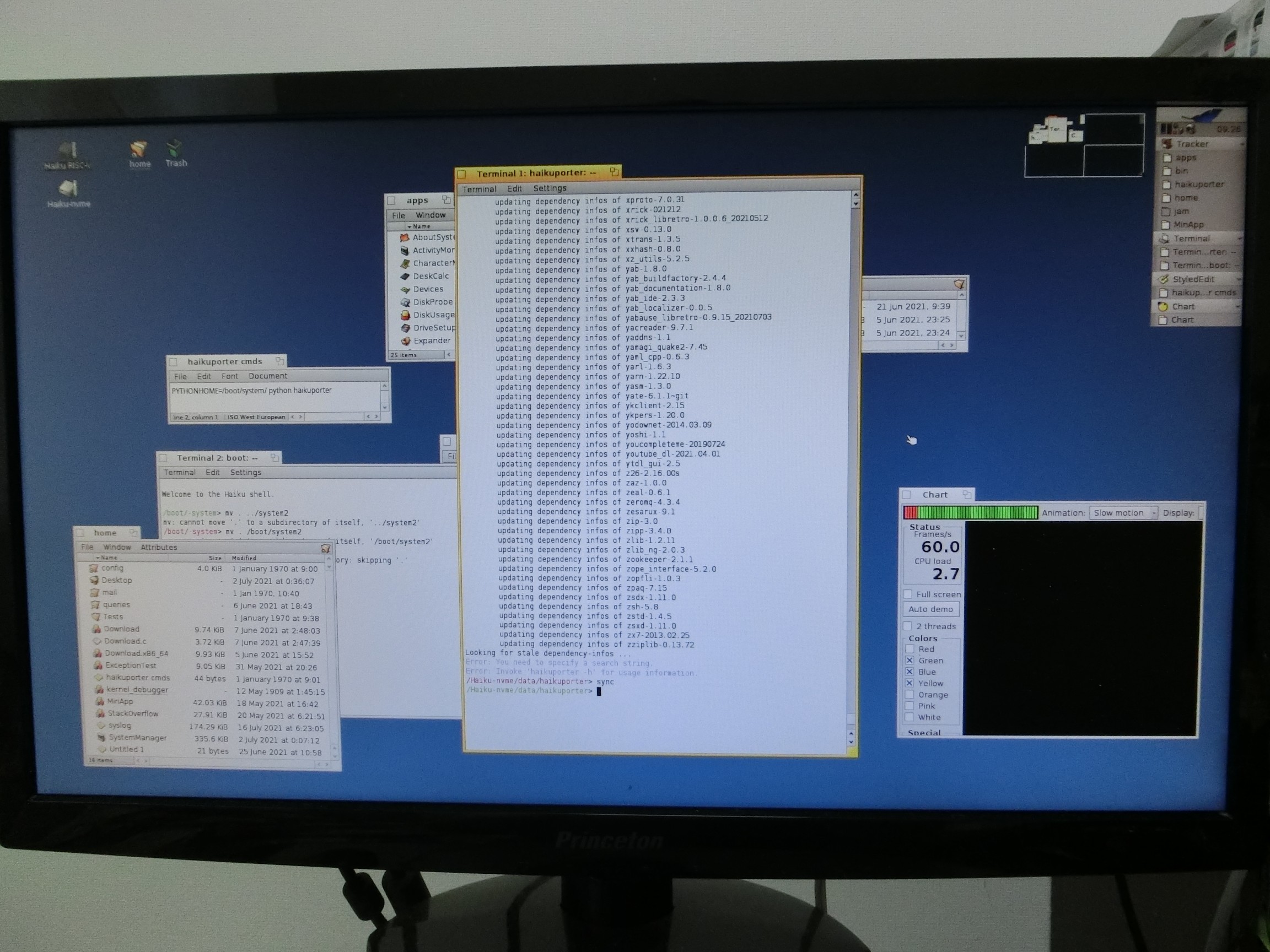 Hows the performance in general on this board btw?

It is significantly slower than my x86 PC. Stamping is observed when moving windows. It should become faster when SMP will be implemented, board have 4 cores.

It is also possible to increase CPU frequency, currently 1.2 GHz is used. Frequency up to 1.5 GHz reported to be stable.

I am in aww of the amount of progress you’ve made here, just, wow.

Note that Chart application with stars animation is used as indicator that system is working and not freezed/crashed. 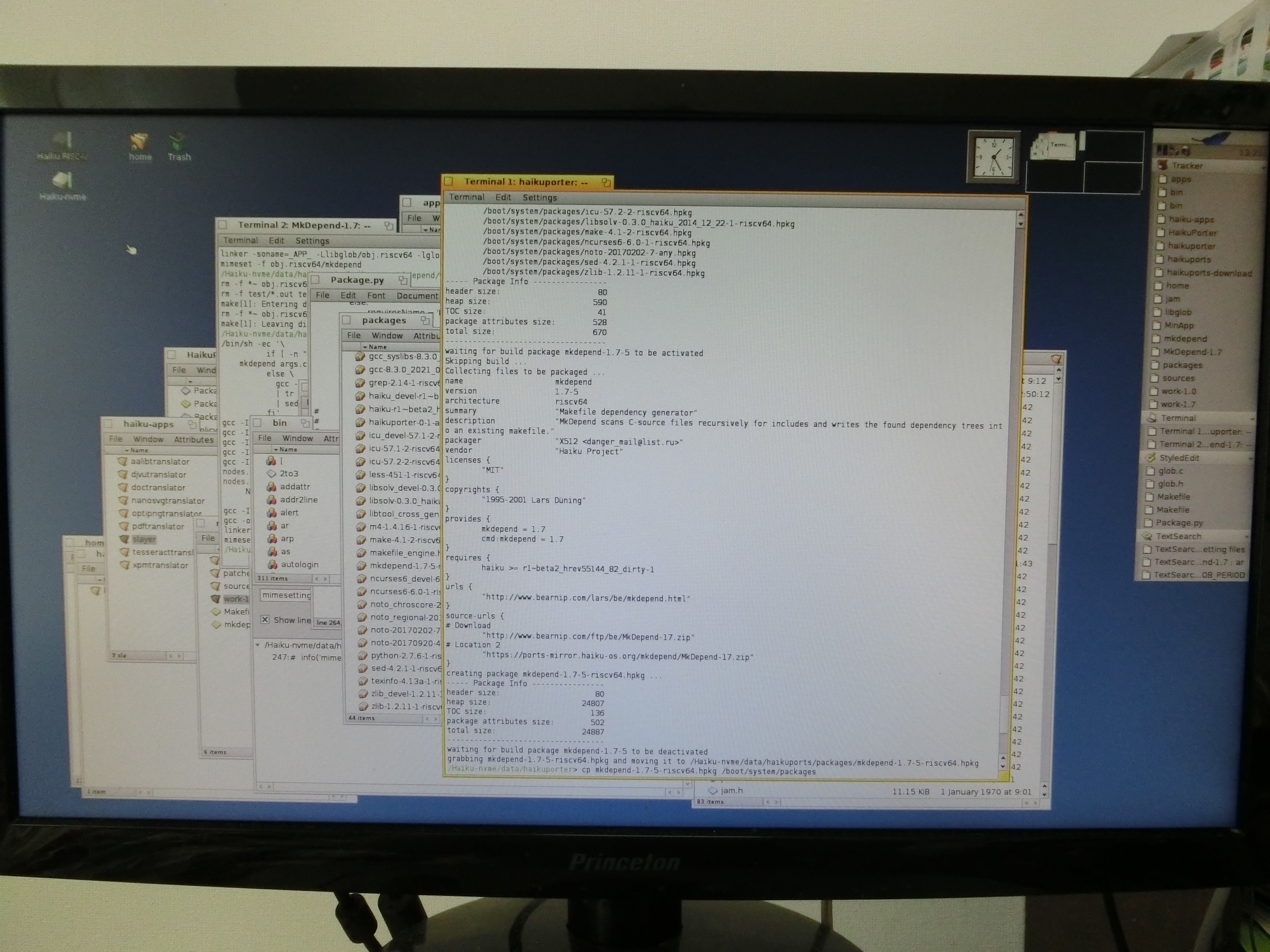 Hows the performance in general on this board btw?

The CPU cores are a similar architecture to ARM A55 (and a good bit better than A53) but without NEON. Or to the early Atom or Core 2 CPUs, or original Pentium or PowerPC 601/603 – but running at much higher clock speed, obviously. Noticeably better than a Pi 3 on most things, and similar to an Odroid C2. CPU is 1/2 to 2/3 of a Pi 4 depending on what you’re doing.

It’s using a proper video card and M.2 SSD helps the feel of interactive use a lot. But it’s let down because for some reason once you get out of the (pretty good) L1 and 2 MB L2 cache, the bandwidth to the actual DDR4 RAM is for some weird reason only about 350 MB/sec.

Obviously quite expensive for the performance at $650 (board, CPU, RAM) plus video, SSD, ATX power supply, case if you want but existing is the first step. There are other RISC-V SBCs at much lower price points coming this year but this will remain the overall fastest.

The BeagleV “Starlight” coming in September (or soon after…) with 4x 1.5 GHz cores (slightly newer and better versions of the U74 found here) and 8 GB RAM for $149 will be close to the same performance – the CPU cores will be a bit faster, but the I/O won’t be as good. There is a built in GPU (yay!) but it’s PowerVR (boo!). They’ve hinted there may be some king of PCIe on it (unlike the beta boards), so NVMe SSD may be possible.

Obviously not as cheap as a Pi, but getting a lot closer.

Most people should wait a few months and see, unless the $500 difference doesn’t matter to you

Next year should see out-of-order RISC-V CPUs comparable to the Pi 4, and hopefully with the about-to-be-ratified RISC-V Vector extension (very similar to SVE, which of course no one in ARM SBC land has yet) leapfrogging the whole NEON / SSE / AVX thing.

It’s going to be quite a while before RISC-V is competing with high end x86 – which is the same as ARM too, except for Apple, and they’re not sharing.

There is a built in GPU (yay!)

I hope that it will be not too difficult to setup framebuffer. For PCIe graphics cards existing Haiku drivers can be used. Graphics is really must have thing on Haiku.

can I call you a little curiosity? why don’t you take a screenshot? is it difficult to export it?

Screenshot is not working for now, probably because of missing libpng and PNG translator.

I’ve has my eyes on BeagleV for a while, but got a bit sad when I saw the hardware specs. Hope rumours are through and that it will come with better hardware specifications.

What specs are you disappointed in?