Haiku on a tablet

StyledEdit should scale the font sizes used in documents according to the system font size, just like other applications do already; nobody’s taken the time to do that yet.

Some base font size should be used to implement proper DPI support in StyledEdit. How it can be defined?

By the default system font size; then all StyledEdit documents are scaled according to that, and the saved representation always matches the default font size.

By the default system font size

How to get “default system font size”? Is there some constant definition or setting? Should value “12” be hardcoded?

How to get “default system font size”? Is there some constant definition or setting? Should value “12” be hardcoded?

However for StyledEdit, the font size is hardcoded in saved files, and is normally in the same unit. Should we scale it by 12/currentSize on save and load?

I mean font size used to get scale ratio scale = be_plain_font->GetSize()/baseFontSize. Should baseFontSize be hardcoded (12 for example), or it should be configurable? Note that default font size in BeOS is 10 and some programs depend on it.

I did install Haiku on a tablet. Mine is an Asus T102H, with keyboard a la Surface. (Wouldn’t recommend asus stuff though). It has 4 GB RAM and 128 HD with an Atom processor.
On this device, Haiku installs without issues (second half 2019), and can use the keyboard and trackpad without problems, works as a laptop.
The only issue is that screen appears rotated in portrait mode and I wasn’t able to get it rotated to landscape mode in order to use the tablet as a laptop.
Didn’t check camera nor fingerprint reader though, as was a bit of a neckbreaker (display in portrait with keyboard attached). Touch didn’t work.

Regarding interface scaling, it’s clear that some Haiku interface design is not ready for touch devices, actually, only would need to scale toolbars, window tabs and menu item spacing. I presume that could be doable in a setting, like alternate between Desktop Mode and Touch Mode.

In any case, I presume there should be some HIG definitions in order to keep things a bit ordered.

It’s clear that many modern laptops also offer touch screens, some even with pen support. Hopefully, Haiku will also have that support sooner or later.

It is possible to change size of some GUI elements by changing system font size.

Hopefully, Haiku will also have that support sooner or later.

What are you expect from “touch mode”? Only size change or something else?

What are you expect from “touch mode”? Only size change or something else?

Well, I’ve been thinking a lot about that since I installed/uninstalled Haiku on that tablet so, now that you ask, here I go (should notice that I, yet, don’t have a clue on how Haiku API’s work, I’m fighting my way with Python trying to understand the Layout API to code something for Haiku with the Python API bindings, so what I’m about to say might sound unreal, that would be due to my ignorance, so be ready for it):

Basically, all these are the first thoughts I had on having touch functionality on Haiku. If I keep thinking, plenty more could come out, but for starters, I presume this list can do.

Of course, I have no idea on how to do any of this stuff, as right now I’m fighting with Python and GDScript on my free time, which I also use to think stuff like this list too. Hopefully, someday I can complete the development of a simple Python program for Haiku.

So here are some images I just took: 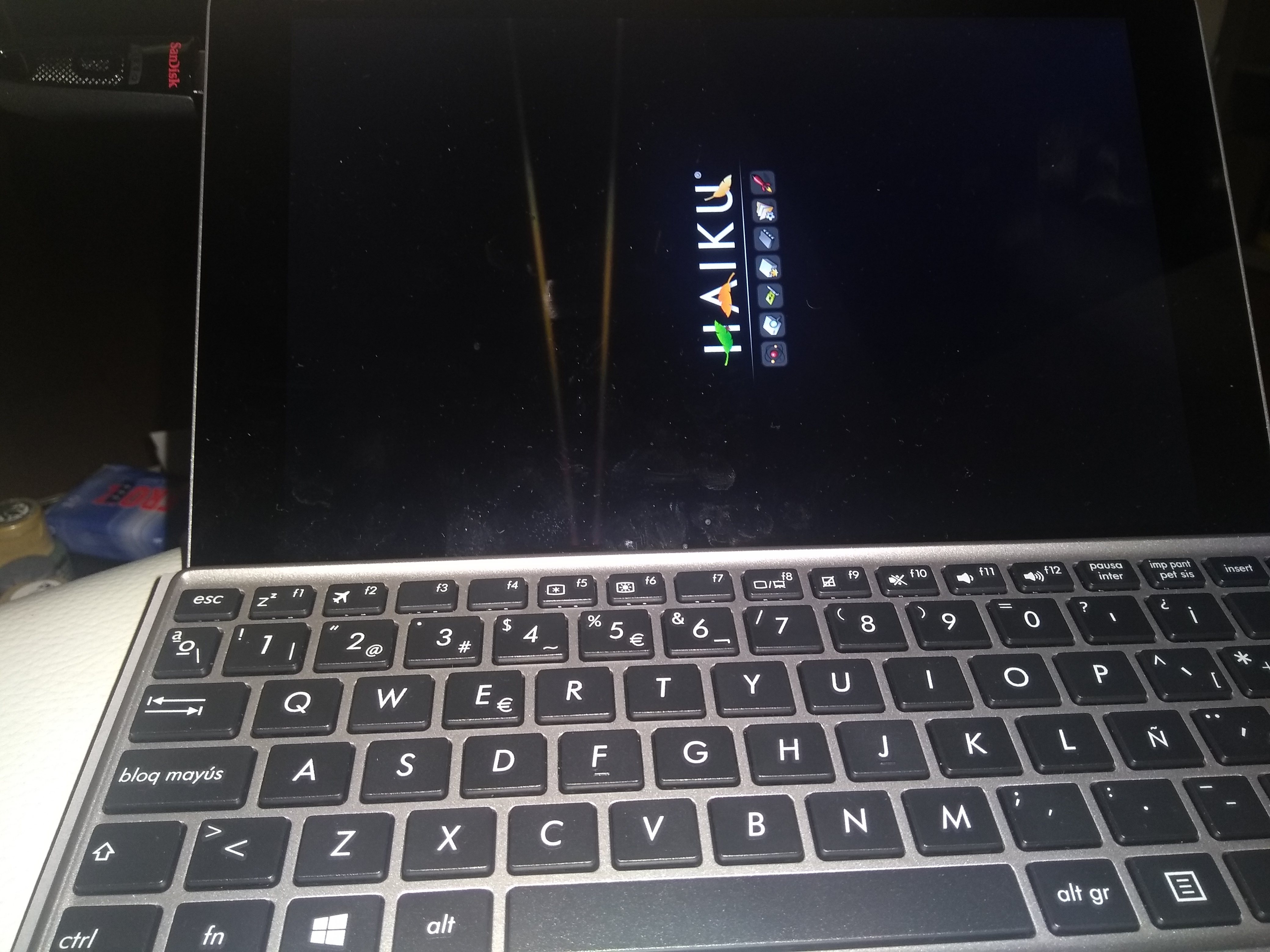 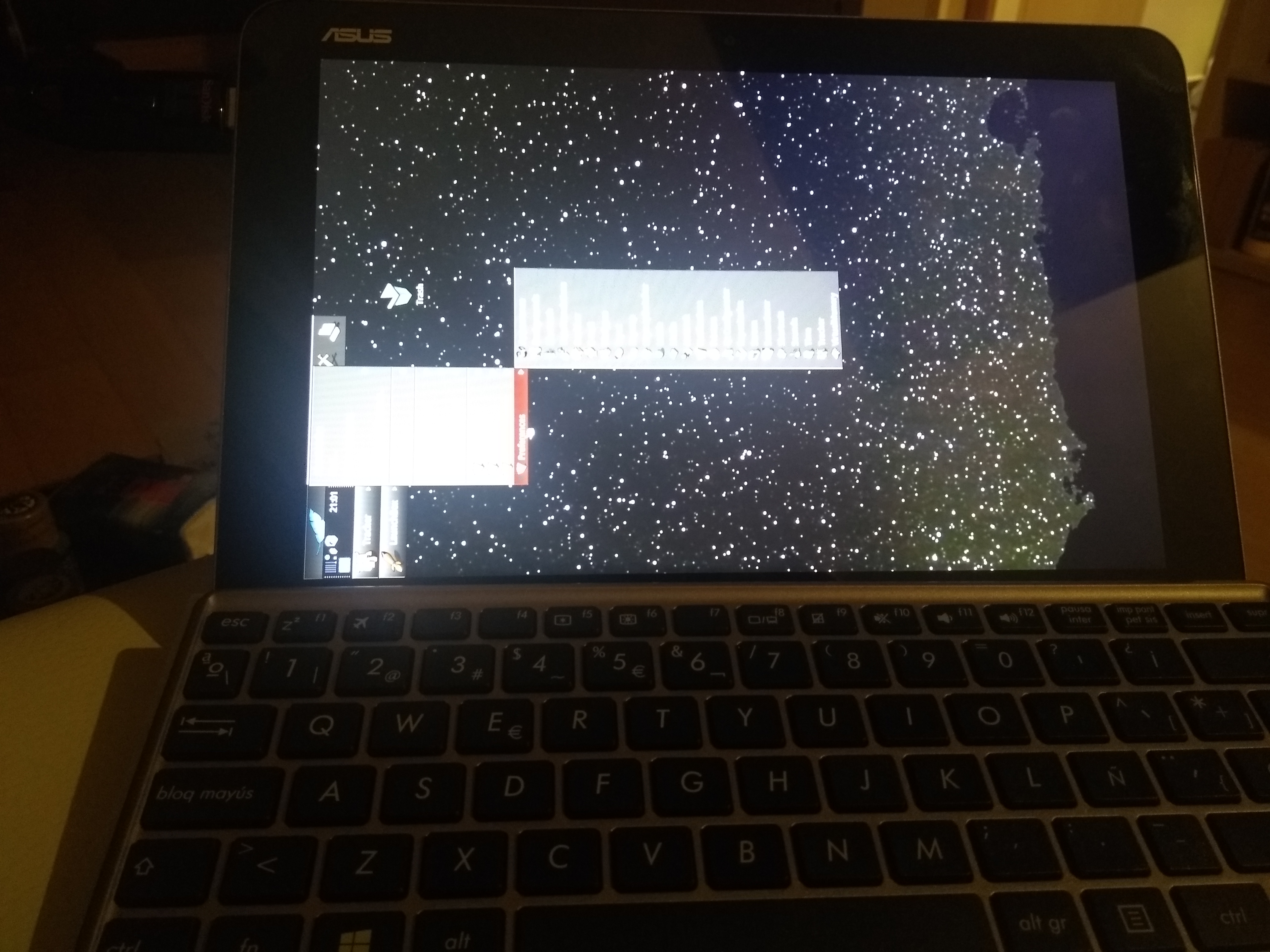 This tablet works ok on Haiku, though as you can see, the image is rotated 90 degrees, and there is no way to use it like that. Trackpad does not match screen, so it’s trial and error to get to the menus.
It’s important to notice that this tablet has an Atom processor and just 4GB of RAM, and boots quite fast on Haiku. I mean, boots faster than my Ryzen box, and I’m not talking a bit faster, I’m talking noticeable faster.

Touchscreen does not work, not with fingers, nor with the stylus, and while it’s not an issue with Haiku at the moment, it might be later on. I mean, right now this tablet has Linux installed, and Haiku performs better, but I don’t have pen input nor touch to do drawing, which is what I use the tablet for.

Nonetheless, first things first: If anyone can point me in the right direction to get the right screen rotation, I rather have Haiku installed there, and then work from that situation up providing any info towards getting touch input available on Haiku.

Screen rotation is an unimplemented enhancement, it seems: https://dev.haiku-os.org/ticket/14510

I see @waddlesplash . I went through the ticket which seems to be a year old. Is there anything I can do to help on this matter?

Do you have some more insight as to what needs to be done to implement screen rotation? The information in that bug is pretty vague. I’d like to give it a try if someone would guide me a bit in the beginning. I’m a senior developers with 20+ years experience developing native apps in C++. My time is very limited but I’d love to make some contributions to Haiku.

The best way to implement this has not been determined. Probably the best method would involve changes to the scanline renderer or something like that, but it has not been discussed, hence why the ticket is so vague.

Simplest solution to perform screen rotation without hardware support is to perform rotation while coping screen backbuffer to frontbuffer (https://git.haiku-os.org/haiku/tree/src/servers/app/drawing/HWInterface.cpp#n381). Also rotation will be needed for screen capture (https://git.haiku-os.org/haiku/tree/src/servers/app/drawing/DrawingEngine.cpp#n1503). BDirectWindow software screen rotation support is not possible and it should be disabled.

BDirectWindow has a buffer_orientation parameter which apps could handle if they wanted to.

Then you’ll want an ePaper driver